Most, if not all, of us are chomping at the bit to resume our outdoor activities and meander around the city in more conducive weather. The good news is we will have more to do this summer about Carmel, specifically in Midtown and in the Arts & Design District along the Monon Trail. With the impending grand openings of new establishments, such as Sun King Distillery, Anthony’s Chophouse and 3UP, coming this summer and the substantial completion of the first phase of infrastructure improvements to the Monon Green Space, residents and visitors alike will have even more to experience. 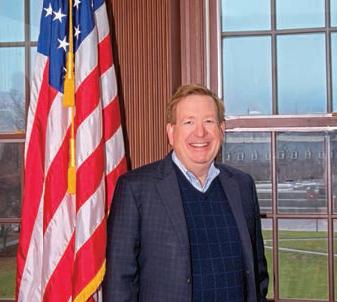 We sat down with Mayor Jim Brainard to get a quick update on some of the projects that are underway, such as the Proscenium and others that have been discussed recently in the local news, as well as his thoughts on the city’s latest national nods. He also shared his thoughts on the 20th work anniversary of Nancy Heck, director of community relations at the City of Carmel.

What is the status of the Proscenium project, the mixed-use development located at the former Party Time Rental site?

I’ve been told that everything is in place. The utilities are being buried underground between Carmel Drive and north of City Center. When that project is complete at the Proscenium site, breaking ground on other phases of that construction will begin late spring or early summer.

The Board of Zoning Appeals has approved the site location for a proposed Mosque. What are your thoughts on this matter?

Regardless of whether this is the perfect or best spot for it [the Mosque], those issues were disputed and decided by the BZA. It’s important for everyone, regardless of background, to feel welcome in our city. If we’re going to compete on a global basis for jobs and economic opportunity, we’ve got to be an open, welcoming city, regardless of where a person is from.

Speaking of competing on a global or national basis, the city was named “Best Place to Live” in the entire United States by “Town & Country” for the second year in a row and “Best Place in the U.S. to Launch a Career” by “Money Magazine.” Do these acknowledgments hold any real value when it comes to recruiting companies and future residents?

They absolutely do. I imagine that those announcements were emailed to lots of adult children of Carmel parents who have moved out of state to places like New York, California and Florida as their way of coaxing them to come back to Carmel. These national acknowledgments prove that our strategy is working. I have a conversation with one of our larger corporations, talking about how they are going to be able to hire the people that they need from all over the country and how helpful acknowledgments like this are when they go out to recruit people.

With the idea of spring and summer activities fixated on people’s minds, what can you and Joshua Kirsh, engineering administrator at the City of Carmel, share with us about what’s to come along the Monon Green Space?

We’ve already started Monon Boulevard. I try to drive past it every day to see the progress and talk with the workers. Even in this cold weather that we’re having at the end of winter, they’re still out there working every day. That’s going to be a beautiful project. The artwork, the extensive landscaping and all of the things that will be in the median in between the two traffic lanes is going to be beautiful and fun.

Specifically, what areas are we looking at for the first phase of the infrastructure improvements relating to the Monon Boulevard, Josh? And will some of it be completed by or near the grand opening of Sun King Distillery? (Joshua Kirsh provided additional details on the progress of this part of the project.)

Carmel’s working diligently on the infrastructure portion of Midtown while private investment continues to come out of the ground in the shape of buildings and businesses like Sun King, etc. The first phase of Carmel’s infrastructure improvements there in the Midtown area, we anticipate, to be substantially completed by June. That will involve the southbound lane and the majority of the northbound lane from what we all identify as 4th Street SW up to 1st Street SW.

Through the remainder of this year, the rest of those infrastructure improvements – roads, paths and the new Monon Green Space – all of that will be tied together and be substantially completed before the end of this year. There may still be a little bit of landscaping or dirt work to happen in the spring of 2019, but for all intents and purposes, the footprint will be there, and it will be quite striking.

Last question for you, Mayor Brainard: What does it mean to you to have an employee of the City like Nancy Heck dedicate 20 years to the job and to the city of Carmel?

Our administration has been so fortunate to have some of the best people possible choose to work for the Carmel government. Nancy Heck is an example of that. She’s a lawyer by training, and like many of our employees, she could’ve been successful working in the private sector, but she chose to work for the City because of the excitement, the progress, the creativity and because of the Carmel community. A lot us believe that this city is very special, and it can be a global competitor as a quality place to live. We believe what we’re doing is very important, and Nancy has dedicated the greater part of her career to helping make this city what it is today.