As the City of Carmel looks to close out another productive calendar year, we sat down with Mayor Jim Brainard to discuss a brief overview of some of the progress and new additions that have occurred or are getting ready to debut in the city, just in time for the holiday and winter seasons.

The mayor was pleased to report that Carmel is listed at the top of the list for the least amount of Personal Injury (PI) accident statistics, based on data released by ARIES for Indiana cities and from the Carmel Police Department’s 2016 Annual Report. ARIES for Indiana listed Fishers second to Carmel.

While local motorists may be feeling construction fatigue, the mayor reassured us that the roundabout projects, with the exception of two that were delayed due to gas lines, have been on time or ahead of schedule in the past two years.

“The number one reason why we build roundabouts in Carmel is because they save lives and reduce injuries. Our injury accident rate is the lowest compared to any city in the country,” Brainard stated. “These are major construction projects that will never have to be done again. They will be there for hundreds of years, and as a result, our community is far safer. People are able to commute around the community more safely, and it is a real improvement to our quality of life here in Carmel.”

While the mayor was unable to comment on the 96th Street road construction due to pending litigation between the City of Carmel and the City of Indianapolis, his office confirmed that the two cities have signed an agreement conditioned on approval by both councils to settle a lawsuit regarding the future of 96th Street road construction. The agreement, which was agreed upon as a result of Carmel’s request for court-ordered mediation, gives Carmel the green light to continue its plan to install roundabouts at congested intersections along 96th Street. State law obligates Indiana cities to build and maintain roads on their southern and eastern borders.

Under the terms of the agreement, new roundabouts will replace traffic-signalized intersections along 96th Street at Hazel Dell Parkway, 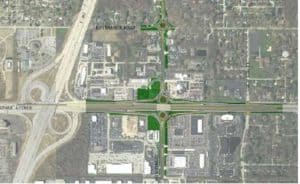 Gray Road and Delegates Row. Carmel will not acquire any new right of way at the intersection of 96th and Randall Drive. In addition, Carmel has agreed to repair any Indianapolis streets damaged as a result of construction detours.

The new inter-local agreement must be approved by both the Carmel City Council and the Indianapolis City-County Council. Upon approval, the lawsuit seeking injunctive relief, filed by Indianapolis, would be dismissed. Carmel would then dismiss its interlocutory appeal of the court’s initial ruling in that lawsuit, and both parties would be responsible for paying their own legal expenses.

Under the terms of the settlement agreement, Carmel may immediately resume its right-of-way acquisition efforts on the south side of 96th Street, although it may not close on any acquisitions or begin roadway construction within Indianapolis until the agreement is approved by the legislative bodies of both cities.

Residents have likely seen the new construction of the outdoor ice skating rink that will be part of the festivities debuted at this year’s Holiday at Center Green (formally known as Holiday on the Square). Holiday at Center Green will kick-off the season with the opening of the outdoor ice skating rink and the Carmel Christkindlmarkt along with a holiday lighting ceremony, a visit from Santa, live reindeer, and other animals to pet, holiday entertainment, and children’s activities. The event is free and open to the public.

The Carmel Christkindlmarkt is bringing the charm of a long-standing European tradition to the heart of Carmel. One of the earliest of these markets was the 16th-century Christkindlmarkt in Nuremberg, Germany, and the wonderful tradition has now spread worldwide. Guests will experience one-of-a-kind, high-quality, handmade gifts, Germanic-inspired food, drink and ice skating.

“People will come from other cities and towns to visit the Christkindlmarkt, see a show, stay in our hotels, eat at our restaurants and shop in our stores,” Brainard said. “It will be an opportunity for people to come and purchase authentic-made products and food, German-bottled beers and Gluhwein and experience the seasonal holidays that originated from the Germanic countries.”

Brainard emphasized the festivities that have become a Carmel tradition for more than 20 years at the annual Holiday on the Square will continue and be in addition to the introduction of the new elements that will become traditions in the years to come.

“The Holiday at Center Green will be held on the Saturday before Thanksgiving, as has been the tradition, so that families can still go downtown and enjoy the lighting festivities at Monument Circle,” Brainard said. “We will still have musical and dance presentations from local dance and musical groups.

Of course, Santa Claus will still arrive in the antique fire truck. We pay close attention to the musical and dance presentations to ensure that they display holiday traditions from a variety of cultures. Our city is made of people with various faith traditions aside from Christianity. We celebrate our diversity in our city. Opening day will be a festive and fun day for all who attend. The ice skating rink will officially open for the winter season. There will be a lot of trees and lights, and it will a beautiful start to what will hopefully become a tradition for decades to come in Carmel, Indiana.”