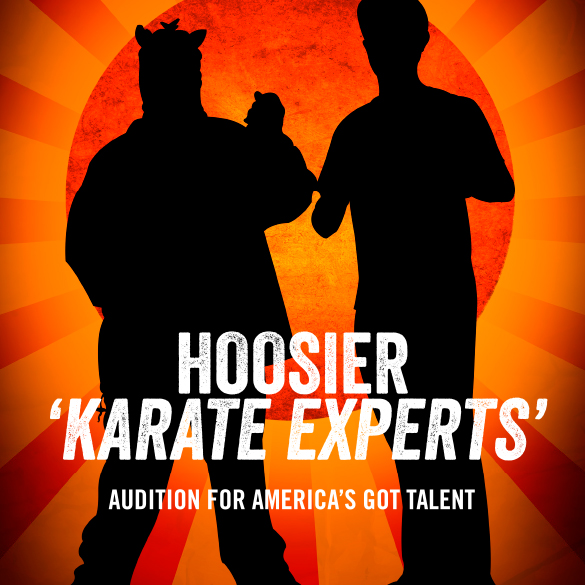 It was a Tuesday night after a long Memorial Day weekend and I was watching television, flipping back and forth between America’s Got Talent and a baseball game. Unfortunately, the Dodgers were beating the Reds, so I spent most of my evening watching the “talent show on steroids” premier episode. That’s when a 20-something kid came out and said, “My name is Dustins Dojo and I’m a trained black belt and I learned to be a black belt at Roger Baker’s Taekwondo and Pizza, Pensacola, Florida.” 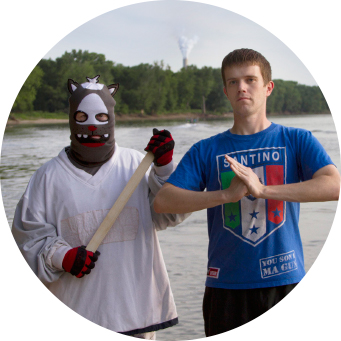 He took a bow with his silent sidekick who was wearing a ski mask. “This is my friend Terry and I am his sensei,” he added, followed by a roar of laughter from the audience.

Over the course of the next five minutes I witnessed the funniest karate parody I’ve ever seen. Dustins Dojo put on a demonstration featuring the breaking of flimsy wood slats, 60 seconds of full-extension punches, and a face full of salt thrown into his eyes by Terry “when he least expected it.” Comedy genius was rewarded with a golden buzzer save by judge Howard Stern, which allowed them to go to the next round in New York this July.

I rewound the skit, watched it with my wife several times, and posted a link of the clip on my Facebook wall the following morning, noting, “This was the hardest I’ve laughed in a long time.”

Then something magical happened. One of my Facebook friends left a comment that Terry Terry was his wife’s cousin from the Indy area. These guys are locals? I had to meet them.

So we headed west with a carload of people: our trusty videographer Mitch Jacki, and magazine designers and fans Alyssa Sander and Austin Vance. Our rendezvous spot was in Covington, Indiana at the famous Beef House Restaurant in their back parking lot. From there, Dustins Dojo and Terry Terry took us to two of their training locations in Fountain County: The “snake pit” and the “road that leads down to the river.” 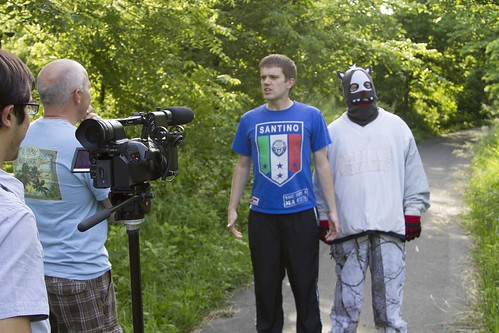 On camera, Dustins Dojo talks about their debut on America’s Got Talent (NBC), his fighting inspirations and how they would spend the $1 million should they win the grand prize.

Dustins Dojo, donning his WWE Santino Marella t-shirt, treated us to an on-camera, in-character interview. He told us about his karate inspirations, being bullied in 3rd grade and roundhouse kicking his nemesis in the ear, the ever-presence of attackers and what they would do with the $1 million grand prize should they win America’s Got Talent. “We would build the Roger Baker Taekwondo and Pizza, Pensacola, Florida, Fountain County.”

Off camera, Dustin Britton (Dustins Dojo) and Ed Kent (Terry Terry) talked about their backgrounds and the events that led up to their premier. They met through their church, where Britton is the youth minister. When they heard that America’s Got Talent was doing auditions in Indianapolis, they came up with these two characters and fleshed out the skit on the drive over to the Indiana State Fairgrounds. 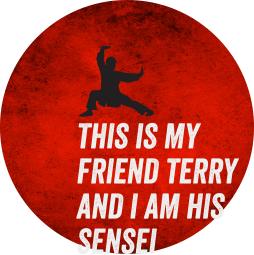 “We were in character all day long,” said Britton. “The producers didn’t know what to think of us. At the end of the day, I broke down and laughed when he questioned my ‘world record’ for full extension punches thrown in 60 seconds. The entire room erupted.”

Their act is like watching Napoleon Dynamite trying to understudy Bruce Lee. Dustins Dojo speaks loudly, as if you’ll believe him if he says it with pronounced authority. Terry Terry, whose name is a spoof on local horror movie host Sammy Terry, looks around aimlessly, trying to spot attackers. “Only locals would get the Sammy Terry reference,” Kent said with a laugh.

With their newfound fame, Britton has created a website at DustinsDojo.com where he posts exercise videos, karate demonstrations and merchandise including a “Roger Baker’s Taekwondo and Pizza, Pensacola, Florida” t-shirt. As for America’s Got Talent, the two will be making their second-round appearance sometime in July. Be sure to watch on Tuesdays at 8 p.m. for their New York debut.