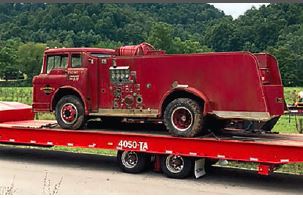 A piece of Carmel Fire Department’s (CFD) history that was once lost was found, and a funding campaign that began in 2017 remains underway as both active and retired members of CFD work to restore Engine 1 – a 1960 Ford C850 fire truck. CFD purchased the truck in 1960, and after several decades of service and a few trades of hand over the years, Engine 1 returned to its home in Carmel where restoration efforts have been underway.

CFD Retired Battalion Chief Gary Dufek shared the story about Engine 1’s journey and his vision for its complete restoration as a means to help preserve CFD’s legacy.

“How this whole project started is that I was reminiscing with Chief Martin [retired CFD Assistant Chief Jim Martin] up at the Buffs [Carmel Fire Buffs and Fire Dept. Museum],” Dufek said. “Jim pretty much runs that whole operation up there. He had made a comment about how the trucks that he has are great, but none of them are truly CFD trucks. That got my mind thinking, ‘Where can I find one?’”

Dufek shared Engine 1’s timeline beginning with CFD’s purchase of the truck in 1960. Early in Dufek’s career, he had driven and ridden on Engine 1. CFD traded the truck in 1981 for a new truck. Engine 1 was refurbished and sold to the Fishers Fire Department. Then in 1993, in an agreement with the Indiana fire marshal and the Kentucky fire marshal, the truck was donated to the Kinniconick Volunteer Fire Department in Vanceburg, KY. It served the small community until it was taken out of service in the early 2000s and was stored in the department’s garage until it was moved to a salvage yard in Morehead, KY.

After several failed attempts to connect with someone who knew the whereabouts on Engine 1, Dufek struck gold when he connected with Chief Matt Ross of the Kinniconick Fire Department in May 2017. Ross took pictures of the fire truck that was wasting away in a cow pasture/salvage yard.

“They [Kinniconick Fire Department] ran the truck from ’93 until around 2003,” Dufek stated. “At that point, it was almost 45 years old and had certainly seen its share of service. I drove down to see if it was our truck on June 24, 2017. I had no idea what the VIN number was and was going off of memory. We thought it was our truck because of the clearance lights that were installed on the front of the truck. Those specific types of lights were installed during the time of CFD Chief [Donald] Swails.”

Dufek met up with Chief Ross who took him to the salvage yard to identify the truck. While he thought it looked like CFD’s Engine 1, he still couldn’t positively identify it with 100 percent certainty.

“Back in the ‘80s when the city of Carmel became a city, we started doing inventory of the assets of the City,” Dufek recalled. “We put inventory tags on everything. We put tags that were about 2” long and 3/8” high, and when I opened the driver’s door of the truck, there was a tag that read ‘City of Carmel Fire Department.’ The hair on my arm rose up. I shut the door and said, ‘It’s our truck.’”

After negotiating with the surly man who owned the salvage yard, Dufek convinced him to hold the truck and that he would be back in touch to purchase it. He returned to Carmel where he met with Clay Township Trustee Doug Callahan. Dufek shared that Callahan is a retired fire chief and ran on Engine 1 with Dufek. CFD was granted a bond from the township for $10,000 that went toward purchasing the truck and transporting it back to Carmel. On August 15, Dufek; Rick Martin, CFD mechanic and the son of Jim Martin; logistic chief Scott Osbourne; and mechanic technician Jason Force brought Engine 1 back home to Carmel.

“Our whole vision for this project has been to do a total restoration [on the truck],” Dufek emphasized. “After talking with City Councilmen [Ron] Carter and [Jeff] Worrell, Council Woman [Sue] Finkam and Mayor Brainard, the City was gracious enough to put a line item in the budget [$25,000] for the restoration of Engine 1.”

Dufek and his fellow restorers have done a great deal of the restoration prep work themselves, and once they got to the stage where the actual restoration needed to take place, they sent Engine 1 up to Renewed Performance Incorporated (RPI) in Tipton, Indiana.

“The owner of RPI is a resident of Carmel and is very excited about the project,” Dufek shared. “He is working with us on the cost factor. So right now, the t 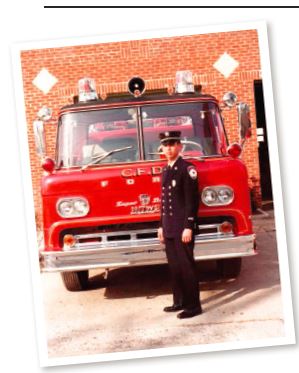 ruck is in pieces up there.”

CFD held a fundraiser during CarmelFest this past summer and raised $5,000 that went towards the restoration project. CFD plans on organizing another fundraiser in February or March of 2019. Dufek estimates that the restoration project will take nearly two years to complete and an estimated $150,000. Dufek humbly pointed out that it will take the generosity of community members to assist in CFD’s fundraising efforts towards this project. He is seeking the assistance of businesses who may want to get involved in this effort.

“We are in the planning stages to hold another fundraiser and are actively talking with members of the city council and other local organizations, such as the Carmel Rotary Club,” he said. “My vision would be to have Engine 1 completely restored and unveil it by July 4, 2020. Maybe we could even have it in the CarmelFest parade. Fire service is tradition. Back then, we didn’t think about it being history. We were the history. We didn’t think about preserving stuff, but we do now. Eventually, Engine 1 will be sitting at the Buffs in the exact spot it ran out of 50 years ago.”

If you are interested in assisting CFD and donating to the restoration of Engine 1, donations can be sent to 2 Civic Square, Carmel, IN 46032 and made out to Carmel Fire Buffs/Engine Restoration.