Dr. Dan Fulkerson vividly remembers a medical school experience. While on a rotation in the Wishard Emergency Department, a place Fulkerson refers to as “colorful,” chaos ensued. He and his fellow medical students tag-teamed, treating an assortment of patients within a small area. One stitched up a laceration, while another medical student drained an abscess. The moans of other patients provided constant background noise for their workspace. Fulkerson described the entire scene as a “blender-of-horrors.” Soaking in the extraordinary spectacle, the surgical resident in the room earnestly responded, “Isn’t this great!”

From the humorous to the heart wrenching, unique experiences are part and parcel of Fulkerson’s medical training and career as a pediatric neurosurgeon with Goodman Campbell Brain & Spine and the Indiana University School of Medicine.

“Just when you think you’ve seen it all, something new comes in,” asserts Fulkerson. Fulkerson documents these experiences in his book The Baby Hospital to be released this month. “Medical books, especially neurosurgery books, fall into two types. There are either really sad ones or really pompous and boring books,” says Fulkerson. “A lot of our job has humor and strange situations. I wanted to capture that and make a book that was entertaining.”

The humor and strangeness stem from both medical cases to “larger-than-life” physicians’ personalities, all of which Fulkerson writes about in the pages of his book. Along with the entertaining portions of the book, Fulkerson digs into deeper issues and bigger questions he faces in his medical practice. He also encourages readers to explore bigger questions in their own lives.

“When you work in a children’s hospital, you have to think about big ethical questions,” Fulkerson explains. “When you see a child born with some hideous birth defect or a child facing some terrible things, you can’t help facing some of the big questions about life and meaning.” Fulkerson credits his faith as keeping him afloat.

“There’s no way to be in a children’s hospital and see the horrible and inspiring things and not think about death. When you’re in with the kids, you see 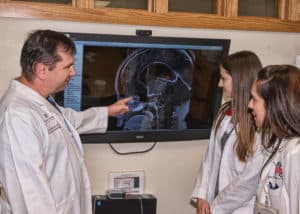 there’s a lot more going on than straight out of a textbook. You get a sense that there is stuff greater than you,” Fulkerson contends.

Along with his medical practice, Fulkerson recounts his experiences traveling to Kenya with a team of Indiana University surgeons. He documents the complexity and challenges of operating in Africa, which include power outages and lack of surgical equipment and staff. He recalls getting “creative” when the power went out during a brain surgery.

Another takeaway from the book is a greater understanding of a highly specialized and interesting field. Only 160 pediatric neurosurgeons practice within the United States. Within Indiana, Fulkerson is one of three pediatric neurosurgeons. Most weeks, Fulkerson logs 80-100 work hours. The increasing pressures facing physicians and the brokenness of the American medical system form a backdrop in many scenes in Fulkerson’s book. “You have to find a deeper meaning to put up with the hours and other things we do,” asserts Fulkerson. “There’s so much hassle with medicine these days. If you don’t enjoy it, it’s not worth it.”

His ability to separate his work life from home life is Fulkerson’s way to escape the rigors of his medical practice. Fulkerson lives with his wife Amy and their five children in Zionsville. Amy Fulkerson affirms that when her husband leaves work, he really does leave work at work.

Andrea Scherer, a pediatric neurosurgery fellow for the Indiana University School of Medicine, believes Fulkerson’s humor is an asset to his role as a physician and a writer. “Having a sense of humor like his can help one cope with some of the sad and very stressful scenarios we encounter in our field,” Scherer claims.

Fulkerson maintains that the general audience of readers, those with and without medical backgrounds, will find the book both relatable and entertaining. Amy suggests that book clubs would enjoy discussing the book. “He wrote something that is interesting, funny, thought-provoking, and sad,” Amy declares. “I was sad when I reached the end; I take that as a sign of a book well written.”

Over the years, Fulkerson wrote bits and pieces of the book. Just within the last few months, he buckled down and completed the entire project. When not writing or practicing medicine, Fulkerson cheers on his alma mater, the Notre Dame Fighting Irish. He received his undergraduate degree in aerospace engineering from Notre Dame. Amy chuckles when she refers to her husband as a true “rocket scientist turned brain surgeon.”

Now, Fulkerson can add author to his resume. Dan Fulkerson’s book The Baby Hospital can be purchased on Amazon.