Coming to the Dale E. Graham Auditorium this May, Carmel High School Performing Arts Department presents its spring musical, “The Little Mermaid.” In this adaptation of Disney’s 2008 Broadway production, CHS’ very own talented cast, crew and orchestra will be led by director Sam Chenoweth.

This show features the hit songs “Part of Your World” and Oscar-winning “Under the Sea.” Chenoweth explained that this production will have a contemporary spin on the classic, family-friendly version of “The Little Mermaid” and the Broadway musical. The cast and crew are putting their own twist on the tale of Ariel, Prince Eric, Ursula, Sebastian, Triton and all their underwater friends. This production is guaranteed to make a splash!

CHS’ production team is comprised of over 100 talented and dedicated students that will take on the daunting task of putting on a challenging musical like “The Little Mermaid.” Many of the same cast, crew and orchestra members mesmerized audiences and defied the bewildering task of producing “The Phantom of the Opera” last year. They made it look seemingly effortless while giving the audiences a first-class, “Broadway-like” experience.

The cast and crew’s challenge for this year’s musical will be to create an underwater experience that will have audiences imagining that the cast is performing deep below the ocean’s surface. How does one emulate the balletic movements of a fish while on a stage? Luckily, many of the cast members are more than proficient at such modern inventions like hoverboards, RipStiks, rollerblades and other contraptions that create the illusion of “swimming” throughout the show.

A recent graduate of Ball State University, Chenoweth is directing his first CHS musical but has had much experience with theatre and choreography.

“Obviously, our goal is to sell tickets,” Chenoweth said. “But we wanted to switch it up and do something different this year. It’s been awhile since Carmel has done a ‘kids’ show,’ and we wanted to go the family-friendly route. Additionally, we had the right cast and talent for this particular production. We’ve got a lot of talented kids here.”

Chenoweth explained some of the ways that this production will differ from the classic animated movie and Broadway production.

“We are using the original Broadway score, though we’ve made some little edits as we’ve needed to,” he stated. “We did some opposite gender casting. Flounder is typically a young child or a boy that has a super high tenor range, and we went the female direction. Scuttle is also played by a female in our production, and that role is traditionally played by a male in the original show.”

Several of the cast, crew and pit members were part of last year’s spring musical, “The Phantom of the Opera,” including lead actor Ben Heber who portrayed “Raoul.”

This year, Heber (senior) is playing the lead role of “Prince Eric,” opposite of lead actress Sydney Greene (junior) as “Ariel.”

“This is my fourth year doing Carmel musicals,” Heber said. “This show is not as complex as ‘Phantom’ was, but this is cool because every year, I’ve gotten the chance to move up a little bit in my roles. Last year, I was more of a secondary character, and this year, I am more of a lead, and that’s quite a fulfilling experience to be able to move up. It’s been a real fun rehearsal process for this show because vocally, it’s challenged me in a lot of ways that I’ve not been challenged before. Even playing ‘Raoul’ last year was not as vocally acrobatic as ‘Prince Eric’ has been this year. It’s pushed me outside of my comfort zone, and also, I fly during this show.”

Greene has been dancing since she was 3 years old and performed in her first musical in the fifth grade.

“I’ve researched the Broadway clips and have watched Sierra Boggess, who is ‘Ariel’ on Broadway,” Greene said. “She [‘Ariel’] is my favorite Disney princess. She’s a mermaid under the sea, and that makes her special. I am definitely bringing a lot of myself into the character. I feel that I can relate to ‘Ariel’ in many ways. She’s a young girl who’s wanting more, and I’m a junior who feels like I’m ready to leave the high school ‘bubble.’ And that’s where I dig deep into the character.”

The role of “Sebastian,” Ariel’s guardian and companion, is played by CHS freshman Jack Ducat.

“I love the show. It’s a super fun show,” Ducat exclaimed. “I just auditioned for the show, and as a freshman, I wasn’t really expecting anything to happen, but I got this role, and I was super psyched. I think that ‘Sebastian’ is looked at as kind of an uptight character. But what I really love bringing out is his fun-loving side where he lets go and has fun. That is one thing about this role that I really connect with. ‘Sebastian’ cares about ‘Ariel’ but also works for ‘Triton,’ so he also feels obliged to protect her. That’s what makes his job two-sided.”

The skittish, yet fun-loving character, “Flounder,” is played by Jenna MacNulty (junior).

“Overall, ‘Flounder’ is an energetic character, so I have to bring that energy into the role,” MacNulty said. “He is also super scared of everything that happens around him, and he follows ‘Ariel’ everywhere – she’s kind of his safety blanket. I’m taking everything that I’ve learned from the movie and the Broadway musical and bringing it into this character.”

The formidable king of Atlantica and “Ariel’s” overprotective father, “Triton,” is played by Cameron Grove (senior) who portrayed “Don Attilio” in the “Il Muto” scenes in last year’s CHS production of “The Phantom of the Opera.”

“As the king, ‘Triton’ exerts this powerful side that I love,” Grove said. “But there is a sensitive side to him where he loves his daughters, especially ‘Ariel,’ and so it’s a very contrasting role. I get to perform both extremes. The challenge of this role is carrying around a trident the entire show. It’s just extra weight that I’m carrying while on a hoverboard that I’ve had to learn to use effectively. It’s much different than any other production that I’ve been in.”

The show’s infamous villain, “Ursula” is played by Laney McNamar (junior), also a veteran performer at CHS who was part of the dance ensemble in last year’s “Phantom.”

“I’m really excited to be playing ‘Ursula’ in ‘The Little Mermaid’ this year,” she said. “She [‘Ursula’] has always been my favorite Disney villain. She has such a little sassy attitude that none of the other Disney villains really have, and her personality is so fun to portray on stage. She has so many dimensions and quirks that I love. I will be playing ‘Ursula’ from about six feet from the stage, and there are four people ‘playing’ my tentacles and two more people helping to move me around on the stage. What I hope that the audiences take away from this production is happiness and joy. ‘The Little Mermaid’ is really a nostalgic story for many generations.” 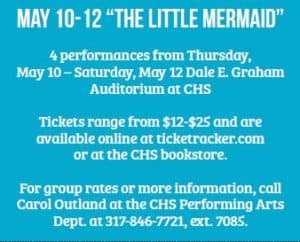