Life On and Off of the Stage

With support from her husband, Ryan Koharchik, the resident sceneographer and technical director, Koharchik is ready to make her return to the stage.

Koharchik, a Zionsville native, is the musical director for the Zionsville High School and teaches language arts at Zionsville Middle School. 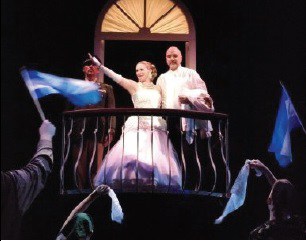 Koharchik moved back to Indiana after teaching for the Teach America Program in the south Bronx for two years. She auditioned for “Aida” at the Civic in 2007 and was cast as Amneris, her dream role. She didn’t meet the director, Ryan Koharchik, until a couple of weeks after being cast. Koharchik performed in several productions and was cast as Eva Peron in “Evita” and Grace Farell in “Annie,” which were also directed by her husband.

“Performing as Amneris was my dream role, and I remember that it took a long time to hear back from the director after the audition,” Koharchik said glancing at her husband. “It was one of those auditions where you feel that you nailed it and gave it your all. I remember telling my family that if the director didn’t cast me, then he must be an idiot.”

Mr. Koharchik did have the good sense to eventually cast her. They have since married and now have two sons, Reed, age four, and Rowan, age two. Mikayla and Ryan have collaborated on middle and high school musicals, which she has directed.

“Ryan is my creative collaborator,” she explained. “He is my lighting and set designer for the high school shows. Truthfully, he is my favorite director. I’ve always liked working with Ryan. He has the ability to not only be the lighting and set designer but also the director. Ryan sees what the lights will look like in his head and thinks about the vision before he even begins. When he directs, he’s involved in every part of the performance, which makes the experience unique for everyone involved in it. I think that’s what makes him a unique director.”

The discussion turned to Ryan, who offered his defense on the length of time his wife had to wait for her first call back from the Civic.
“I was trying to figure out who the trio was going to be, and since it was my first time directing at the Civic, I had to make sure that it was just right,” he explained. “I keep telling her that she was always at the top for that role, and we just had to get everything else in order before we made the calls.”

Ryan Koharchik and his twin brother, Robert, were both involved in theatre while in high school in Hammond, Indiana. Ryan concentrated on lighting and Robert focused on set design. The two brothers both earned scholarships to Ball State University and studied theatre. They went on to earn their master’s degrees at Boston University.

Today, Robert is an associate professor at Butler University after both he and Ryan taught at Purdue University. Ryan left teaching to pursue his true passion and is the sceneographer and technical director at the Civic Theatre. He also works with the Gregory Hancock Dance Theatre, IRT, and Beef & Boards Dinner Theatre. He is currently working with GHDT on their upcoming production of “Superhero” as the lighting designer.

“The last production that I did for the Civic was Pippen,’” he said. “It was a lot of fun but it was time- consuming, and I decided to take some time away from directing when we had the boys. I’d like to get back to it someday.”
Both husband and wife elaborated on the quality of the faculties at the Civic Theatre and the opportunities it provides non-vocational performers.

“Unlike any other community theatre in the area, the performers get to do what they love and do it with professionals,” Mikayla Koharchik said. “We get to work with professional lighting and set designers, costume designers, sound technicians and directors. Performing is our passion and when working at the Civic, we get to be in high-quality productions.”
Mikayla Koharchik is fulfilling another one of her dreams by directing the ZHS theatre students in their upcoming Fall production of “Les Miserables,” a production in which she hopes to perform one day.

“The Civic Theatre is a treasure for all of Indiana,” Ryan Koharchik concluded. “I hope that people will continue to support it and that we grow that support because I think that it provides something meaningful to the community, and that is very important.”