The tradition of excellence continues as the Carmel High School (CHS) 2017-18 school year comes to an end. The CHS Girls Basketball program has produced not one but two All-Stars this season. Not an easy task.

Although the season ended with an upset as the Lady Greyhounds lost a valiant game to the Zionsville Eagles 54-49 at regional semifinals, the CHS Girls basketball program is celebrating the phenomenal season and high school careers of its point guard, Amy Dilk, and guard, Tomi Taiwo, who have each respectively put CHS on the national map.

The dynamic duo appeared, along with their teammates, and won Carmel Girls basketball’s first Hall of Fame Classic, ironically, against Zionsville. As the two prepare to play on the Indiana All-Star team and play against Kentucky in June, they are also preparing for the Big Ten scene. 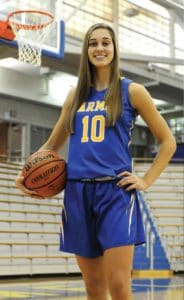 Senior point guard Dilk has had an exhilarating season throughout her final year of high school basketball. In addition to being selected to play for the All-Star team, she was named the Indiana Gatorade 2017-18 Girls Basketball Player of the Year. She will graduate as one of the program’s most distinguished players in its history with 105 games played, 1,404 points, 548 assists and 344 steals as a Greyhound.

Dilk has signed on with the University of Michigan and will begin her Big Ten career as a Wolverine. She has not yet declared a major. When asked what goes through her mind when reflecting on the last four years, she replied, “It’s a lot to look back on. When the season ended, that’s when I really started reflecting on my four years here [at Carmel]. I’ve had so much growth physically and mentally.”

As seasons go, there were highs and lows that included an incident where Dilk dislocated a knee that had undergone a previous surgery. It went back into place, but the incident caused immediate concern and obvious major discomfort. Luckily, Dilk recovered swiftly. Dilk attributes her support system for her ability to bounce back from low points.

“It was my team and trainers who went the extra mile for me and the support from my coaches and family that helped me stay focused,” Dilk emphasized. “I didn’t focus on the negatives but looked only at the positives.”

In regards to the Gatorade nomination, she spoke with humility and once again credited her support system for their ongoing support.

“It’s [the nomination] a great honor, but I couldn’t have done it without my outside support system,” she said. “It just kind of shows all the hard work that has paid off with these awards that Tomi and I are getting. As a player, it is so special. You put in all these hours and time, and to have some type of recognition is a big honor.”

Dilk is looking forward to joining her new teammates up in Michigan this summer. “I have met my teammates, and I have great role models there that I’m going to be looking up to,” Dilk said. “I know that they’re going to help me get through all of the freshman challenges. I’m looking forward to getting myself stronger and to working with the coaches, getting ready for the Big Ten.”

Senior guard Taiwo has had an impressive high school career of her own. Taiwo came to CHS her junior year and finished her high school basketball career with 54 games played, 822 points, 82 assists and 114 steals. 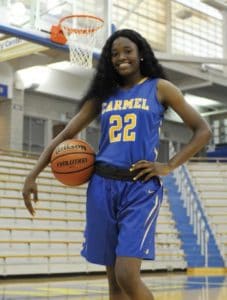 Also preparing for the upcoming All-Star game, Taiwo is looking forward to playing with the girls that she has played against, all for the chance to play against, and hopefully, beat Kentucky.

Taiwo has also signed with a Big Ten university and will join the Iowa Hawkeyes. In addition to focusing on her on-court skills, Taiwo will be studying pre-med and biology. Taiwo shared her personal journey as she reflected over the last four years and shared her optimism for the next four years that have yet to come.

“It has been a fun journey,” she said. “I began high school in Minnesota my freshman year and was at Homestead my sophomore year. I came to Carmel my junior year. I’d say it was for the better because the other schools were smaller and didn’t have as much to offer, basketball and academic-wise. Coming to Carmel helped me to adjust to how big life actually is and has prepared me for college too.”

Taiwo spoke thoughtfully about her team and what working alongside her teammates has meant to her. She is looking forward to working with her collegiate team and to the experiences that await her in Iowa.

“We [the team] had goals that we set at the beginning of the school year, and we’d check them off when we obtained them,” Taiwo said. “It’s been a journey with these girls. They’re all great young ladies, and I’ve had fun mentoring them and being a role model for them, but they’ve also helped me learn a lot of lessons.”

Taiwo continued, “I’ve already been on campus a couple of times now. I really feel at home with the team. My coaches are like motherly figures, and they’re really nice, so I am just excited. I’m also preparing for the All-Star game by working out a couple of times a week with my trainer, and I also go to Shoot 360 and work with them as well. I’m working on my fitness and on getting my stamina up.”

Both Dilk and Taiwo expressed their gratitude and pride to be able to represent CHS at the All-Star game and shared what it means to them to have fans, in particular the younger girls, cheering them on as they continue on their respective paths.

“It’s an honor to play with the best girls in Indiana,” Taiwo said. “It’s fun to see that we have little girls looking up to us. We see their smiles and how they look up to us, and it’s just a great feeling.

Dilk concluded, “I think the best thing that we can do is to go in there and represent Carmel as well as we can, knowing that there’s so many younger girls and spectators watching us. It’s our last chance to represent Carmel.”