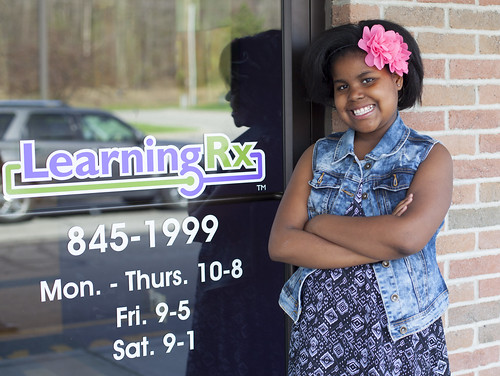 Alese McFadden is a bright-eyed fifth grader who attends West Clay Elementary in Carmel. From just talking to Alese, you would never guess that she once struggled with schoolwork.

From all outward appearances, Alese appears to be bright, engaged and extremely capable with a big friendly smile. You are not surprised to find out that Alese won an election for Student Council in the third grade.

According to Alese’s mother, Cynthia Dubose McFadden, Alese’s grades were mediocre, and her homework simply took forever. Naturally, Alese’s struggles with schoolwork were a tremendous source of frustration for Cynthia.

As Alese approached middle school, Cynthia became more and more concerned that her daughter was falling behind. As Cynthia described it, “We struggled with school for a while as it was going from learning to read and now you have to read to learn, and she just wasn’t getting it. So I was getting worried because we were getting closer to middle school.”

Increasing the frustration was Cynthia’s sense that Alese was capable of much more but did not know where to turn for help. Predictably, like many concerned parents, she “tried Hooked-On-Phonics and things like that in the past, and it never really clicked.” Finally, Cynthia’s boss suggested she contact LearningRx. Cynthia’s boss had two sons that completed the LearningRx program and had very positive experiences.

LearningRx is different from the other programs with which Cynthia tried to help Alese because they were directed to tutoring for a specific subject. The LearningRx program provides a cognitive framework that children can use for the rest of their lives.

“Many learning problems are caused by inefficiencies in how the brain actually processes information, things like memory attention and processing speed,” says Heather Koenig, Executive Director and owner of LearningRx in Indianapolis. “We aren’t tutoring which will only offer temporary help if there are underlying cognitive deficiencies. We are brain trainers offering a permanent solution to learning struggles.

“With our initial assessment, we can pinpoint the underlying cause for cognitive deficiencies and create a brain training solution that puts people on the path to learning faster, easier and more efficiently for life. We help children to adults and can assist people with traumatic brain injury, stroke, ADHD, dyslexia, autism, auditory processing disorder, learning difficulty and those who are just wanting to get a sharper, competitive edge.”

After completing the LearningRx program, Alese’s grades have improved dramatically. Alese says she now enjoys reading because she gets more out of what she is reading. Before she would simply read the words while struggling to connect the words to grasp the larger concept being conveyed in the reading material. According to Alese, it is more fun to read as evidenced by the fact that she now will have as many as five books she is reading at one time.

With regard to her experience with LearningRx, Cynthia said, “I am proud of [Alese] for sticking it out. I like how now she actually applies what she learned here to her schoolwork. I feel like that will benefit her in the long run, the fact that this is something she will have forever.

“It was not just a one-time thing. She knows how to study now where before, she did not understand the concept of studying with the object to retain the information. As a true testament to the results she saw with Alese, Cynthia described her experience with LearningRx as a blessing for her and Alese.