Leading a Crusade for Children of Abuse

The annual Friends of Chaucie’s Place Breakfast will be held Friday, April 27, in conjunction with National Child Abuse Prevention Month. Chaucie’s Place, located in Carmel, is holding its annual fundraising breakfast to raise awareness and the necessary funds to support the life-saving and life-altering prevention programs they offer communities throughout the state of Indiana. This includes Smart Steps: A Body Safety Program for Children™, Lifelines and Stewards of Children®. 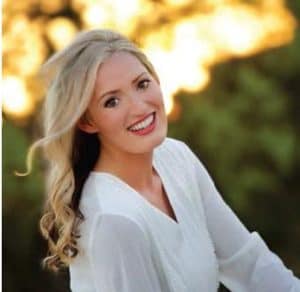 This year’s keynote speaker will be Jenna Quinn. Quinn is a survivor of sexual abuse, author, TED speaker and the champion behind Jenna’s Law, a law that passed unanimously in the Texas State Senate mandating K-12 training for students and school staff. It is the first child sexual abuse prevention law in the U.S. named after a survivor.

Jenna’s Law was expanded to incorporate child care centers, foster care centers, child placing agencies and universities. In 2017, Jenna’s Law was recently amended to include sex trafficking prevention in schools. Since passing in 2009, Jenna’s Law has been adopted in some form throughout over half the nation including Indiana. Quinn and her fellow advocates were instrumental in getting Senate Bill 355 passed in our state.

In 2017, Governor Holcomb signed SB 355, requiring schools to provide education on child abuse and child sexual abuse to children in kindergarten through 12th grades. The bill requires public, charter and accredited nonpublic schools to provide such education by December 15 of each year, starting in 2018.

“When Jenna’s Law passed in 2009, it was the first of its kind in both magnitude and scope,” Quinn said. “It passed unanimously, and I felt that was truly a miracle. We got off to a pretty good start with the legislation in Texas.”

Quinn acknowledges the hard work and diligence of Tammy Lampert, executive director of Southwest Indiana Child Advocacy Coalition, and other advocates from within Indiana working with Quinn to successfully get a form of Jenna’s Law, SB 355, passed in Indiana.

She went on to explain that with the rise of kids and teenagers with smartphones and social media, the need for education in both primary and secondary grades is critical. “Some people think that only the younger kids need it [education] and not the older kids because they know whether or not something is right or wrong,” she said. “The truth is they don’t. There is so much ‘gray’ out there for them. Social media and smartphones have made it easier for perpetrators to find victims.”

Quinn described the legislative process as an emotional rollercoaster, saying there are several groups and associations related to education that have to be engaged and on board.

“When it is all said and done and when a governor signs off on a form of Jenna’s Law, it’s one of the most incredibly rewarding feelings that you can possibly have. What we are actually doing is preventing a crime. It is no different than the campaigns that advocate against texting or drinking while driving. When you look at the prevalence, one in four girls and one in six boys are sexually abused before the age of 18. And with all of the research pointing to prevention as the key, it becomes a no-brainer as to what we need to be doing to solve the problem.”

“Chaucie’s Place is uniquely positioned to provide this training, and Jenna will help inform the audience why this training is important for the protection of children in our communities,” said Richard F. Taylor III, Chaucie’s Place board president. “We are honored to have such a tireless advocate like Jenna Quinn speaking at the breakfast.”