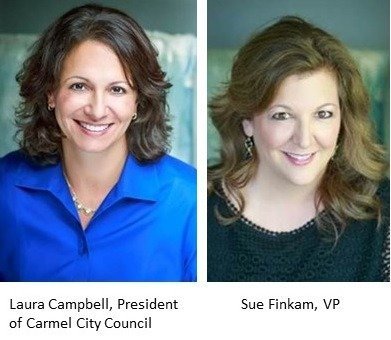 Carmel, IN – Carmel City Council has made history by electing a leadership team made up of two women – the first time that’s happened since Carmel became a city in 1976. Laura Campbell was elected president of the Council and Sue Finkam is vice president for the 2020 year. While Carmel has had several women serve on the Council in the past – including Luci Snyder who served one term as president – the dual leadership of Campbell and Finkam is a historic first.

“I am honored to be one of several women who have made history in leadership in Carmel, including Mayors Dottie Hancock and Jane Reiman, and Councilor Luci Snyder,” said Campbell, who represents the North District. “I am fortunate to have served in my first term with a team of councilors who encouraged me to serve on the plan commission for the past several years and as vice president of the council last year in preparation to become president this year.”

Finkam represents the Northeast District in Carmel and also recognizes this time as an inspirational moment for the next generation.

“Women are greatly underrepresented at all levels as elected officials and also behind the scenes in campaigns. It’s my hope that by seeing two women lead our city council that other women in our community feel more empowered to get involved, and that young women see this as an invitation to someday run for office,” said Finkam.