A year after lacrosse was added as the first new varsity sport at Carmel High School since 1983, the girls’ lacrosse team not only exceeded expectations, but they clinched a State championship their inaugural year.

Both the boys’ and girls’ lacrosse programs have had quite a bit of success in the last decade. But they were lacking the administrative support and recognition that goes with being a varsity sport until last season when the programs became a lettering sport. 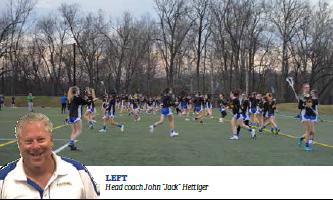 The girls’ lacrosse team is led by John “Jack” Hettiger who was named head coach at the beginning of last season. Hettiger has served as head coach of the lacrosse club since 2016 and has worked with the Carmel Dads’ Club (CDC) lacrosse program since 2007 as a coach and commissioner.

Hettiger continues to value the CDC and encourages his players to participate at any level with the kids in the lacrosse program at CDC. Many of his players coach, participate as officials or engage with the young players during practices.

This last season, Hettiger had the distinct opportunity to not only coach the varsity team’s first season but to also coach his daughter, Kate, who will be attending Augustana College in Rock Island, Illinois. She will continue to play lacrosse while studying physical therapy. Kate was the 2018 Candi Parry Award recipient.

We asked Coach Hettiger what it took for the inaugural varsity team to win State and what his goals are for this coming season’s team.

“Once it was announced that I would be head coach, a couple of things went into place,” Hettiger said. “Working with the athletic department, we put together a schedule of what we were going to be doing over the next 10 months. From there, we started interviewing coaches and such and put a plan into place. That [plan] included preseason conditioning, preseason lacrosse skill development and classroom work. Every month, we did something for team bonding. It is important for us to have the conditioning aspect, the skill development, classroom work and a team bonding event.”

The team worked on that extensive preseason plan from August through December. Hettiger added that the team picks a book to read each year and read “The Champion’s Mind” by Dr. Jim Afremow.

“We relayed what we took from that book back to not only to lacrosse but to our lives, and one of our themes was ‘MPTS’: Mind, Physical state, Technique and Strategy,” Hettiger shared. “We tried to incorporate that into everything that we did.”

Hettiger and his coaching staff broke the season down into a few different phases. The first phase from January to February focused on indoor conditioning and training three days a week.

“We were challenged because we had 63 girls come out,” Hettiger said. “To balance 63 girls so that we [coaches] can work with each of them and give them our time and energy was very important to us.”

The team moved to its next phase in March until just before spring break. The team played 10 games – a couple of games per week and a couple of weekend tournaments. This time period allowed each of the girls to play and gave the coaches the chance to see how the girls were all coming together.

“We took away from that period of time that we were really developing as a team,” Hettiger said. “One of the things that we [coaches] stressed was that we didn’t want to play individual ball. We wanted to play ‘team’ ball. Although we had girls on our team that scored lots of goals, the most important thing for our team was how many different girls scored per game and how many assists were there per game. We had games where we’d score 16-20 goals and have 12-15 assists. That’s unheard of in lacrosse.”

The team’s defense was a force of its own. By April, Hettiger’s defense had matured and was shutting other more-established teams down.

“This group worked harder than any group I’ve ever been around, and I’ve been around coaching for 20-plus years,” Hettiger recalled. “These girls put the time and energy in individually and as a team. We knew we had something special going into spring break.”

The next phase, April to the first week of May and to the end of the regular season, the coaches challenged the girls to see how good could they get. “We challenged them to get better every single day,” Hettiger said. “We had phenomenal practices where our best kids were going up against our best kids. Our levels of practices were sometimes more challenging than some of the games.”

By April, the team had gelled and was running five different defenses and running a dozen different offenses. They were able to keep their athleticism and speed by resting players and alternating them while other teams were not. The result was the Carmel girls’ lacrosse team was able to maintain running at full speed and playing relentless offense and defense.

“The girls were laser-focused on their objective, which was to get to the State championship game,” Hettiger said. “Starting in May, we talked about the six games we had to have in the playoffs and what it would take to get to the championship game. If we played the way we wanted to, we had a chance. We told them from the coaches’ standpoint, and it became our theme, ‘It’s going to be good to get there [semifinals], but it’s only going to be great if we make it to the last game.”

Carmel’s Kelly Csenar and Kate Hettiger each scored a pair of goals in the first half to push the Greyhounds’ lead up to as much as four. In the second half, Csenar scored five unanswered goals. The Greyhounds ended the season with a 13-6 victory.

“We won as a team,” Hettiger emphasized. “We went out and our team outplayed their [Cathedral] team, and I think it’s because we had more ‘team.’”

Looking forward to the 2018-19 season, Hettiger shared, “Coming back as a champion is huge. The program is in place. Now we have to manage the program. The expectations are that we’re going to do exactly what we did last season. If we put the team first and everything else second and continue to work really hard, we could have another outstanding season.”