Leading the Center into Its Next Phase

It has been nearly a year since we sat down with Jeff McDermott, then-interim CEO of Carmel’s Center for the Performing Arts. McDermott was officially selected as the permanent CEO in August. A 30-year resident of Carmel and partner with Krieg DeVault law firm, he met with us to share his thoughts on what the next chapter looks like for the Center.

“I would like to give credit to my firm for being generous to let me do this to begin with on an interim basis,” McDermott emphasized. “They have been and continue to be supportive. I did not imagine that I would be doing this. When you’re in law school, you don’t sit there and think to yourself that someday you’re going to run a performing arts center. When I came on the Center’s board in 2010, I knew a lot about nonprofits and knew that this was a great thing for our community. I was asked to step up as the interim CEO in 2016. The more that I did this and became comfortable with who all of the players are, I realized it was a time in my life, personally and professionally, that just made sense, and I would like to have a chance to do this fulltime.”

McDermott spoke with Eric Payne, chair of the Center’s board, about putting his name in for consideration. The CEO search committee had retained a national search firm, and McDermott was one of over 40 resumes and one of the five candidates that were interviewed in-person during the process. 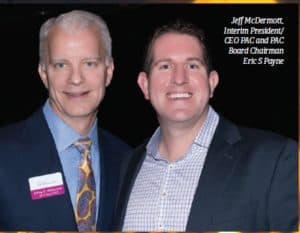 be stronger than mine, but I thought that I could bring something to the table that balances that out on the other side with regard to knowing the organization and my years of being in management with the law firm, and I found those skills were transferable. My relationships with the staff members and with members of the community were pretty valuable, I thought.

McDermott emphasized that once his candidacy went public, he felt an overwhelming sense of support from the community, internally and externally.

“I felt support all the way around, and it was humbling, to tell you the truth,” he shared. “When I was asked to become the interim, I spoke with the board leadership and told them that I would do it on the condition that they would allow me to move [the organization] forward. I didn’t want to just come in and tread water. We moved a lot of things forward throughout the year. We moved forward with the buildout of the new offices. We moved forward with different ways of looking at and considering our programming, and we made a few senior staff hires. One senior staff hire that we haven’t made, which I felt needed to be held off until the permanent CEO was in place, was the vice president of development. I felt strongly that the permanent CEO needed to be involved with that decision because that person works so hand-in-hand with the CEO. That is one position that we are actually taking steps now to move forward with and quickly.”

His focus will continue to be on the Center’s product, the performances, and devising a well-balanced approach to offering some unique opportunities for the patrons in addition to the kinds of performances they typically want to see.

“No company succeeds without a great product,” McDermott stated. “We have put a great focus on looking at what our community wants to come and see and what we think are some unique opportunities. Our numbers for this season have shown that this approach is working. We are at 115% of our subscription sales from this time last year, and while subscriptions are still being sold, another part of the strategy is promoting other ways that the hall can be used besides just performances. The venues that we have here can generate revenue in a variety of ways. What would otherwise be ‘dark days’ at the Center are now open for opportunities to rent and use the space by the community.”

McDermott did not want to prejudge what the new strategic plan is going to look like in fine detail but did emphasize the outreach and educational programs are going to be a significant part of the plan. One area that McDermott mentioned as being improved over the last year is the promotion of the Center’s resident companies.

At the close of September, McDermott and his staff moved into their offices within the Palladium after being housed across the street in the Pedcor offices since the inception of the organization.

“Pedcor has been hugely generous to give us this space and allow us to be here for seven years,” McDermott said. “This is the first time that we have all employees working under the same roof and in the Palladium.”

Looking at the close of the calendar year, planning is underway for the New Year’s Eve Extravaganza at the Palladium. Last year’s event sold out, and McDermott anticipates that the event will likely sell out again this year.

“Last year, we had some limitations on capacity that have been worked out,” he explained. “We will be able to increase the capacity by 300 people this year. We have people of all ages, bands in every room, food and beverages, and it should be a great event again this year. We think that this event will become an annual New Year’s Eve tradition for a long time.”

McDermott concluded, “As a litigator for 31 years, I can tell you that it’s a very interesting way to make a living because everything that you do, someone on the other side is trying to undo it. It’s like sports in that there is an offense and defense, and you are switching sides. Working in the arts and being involved in the Center for the Performing Arts and the Great American Songbook Foundation is so completely different because everything that you do, somebody’s trying to work with you to make it even better.”

For more information on performances and events, visit thecenterfortheperformingarts.org