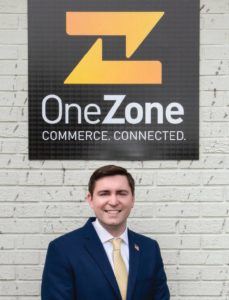 Serving people and communities is in Richard (“Jack”) Jackson Russell’s blood. Russell represents the fifth generation of his namesake, and by serving Hamilton County communities, he follows in the footsteps of the four Richard Jackson Russells who have come before him and those of his other family members.

Russell, a Noblesville native and graduate of Noblesville High School, graduated from Indiana University and has built an unprecedented career path for a man his age. At the age of 25, Russell became the president of the Westfield Chamber of Commerce and has spent the last few years forging relationships throughout Hamilton and Boone Counties. Russell sat down with us to share why he decided this career path, what his passions are and what he feels he contributes to his role as the chief operating officer at OneZone.

“First of all, Mo [Merhoff] has always been a great mentor to me, and that is part of the reason why I sit here today at OneZone,” Russell said. “I have told her that I want to be a sponge and learn and grow. While it is important to look ahead, it is also important to know where you’ve come from and how it started. OneZone is so membership focused, and so I want to learn about how we provide enough value to our members each and every day. I want to learn from Mo’s experiences. That’s the one thing that I always tell people: If you’re a young person, find somebody and be a sponge. We don’t know everything, but we can learn, and that’s where Mo, as I grow in this profession, is such an asset for me. There are Chambers all over the state of Indiana that want Mo to come and talk with them, and I have the luxury of sitting in an office next to hers and learn from her. I’m blessed to be able to do that.”

“Change always presents opportunity,” she said. “Change lets us open doors and windows and consider new possibilities, new ‘what ifs?’ Jack brings new eyes to our organization, new opportunities to think about and new ideas. That’s especially valuable, given the fact that we’re in the first year of our new strategic plan. We’re looking forward to challenging ourselves as an organization and to ensuring our communities remain terrific places for business.”

“Going back, I struggled with what I wanted to do, and while in college, people would ask me what I wanted to do, and I would tell them that I just want to serve others,” Russell said. “When I was at Westfield, they took a shot with a 25-year-old to run their Chamber of Commerce. My grandfather was the chief of police for Noblesville. My dad is with the Noblesville Fire Department. My uncle works for the Noblesville street department, and my great-uncle works for Riverview Hospital. I’ve got other family that works for the Hamilton County Sheriff’s Department, so the Russell family, especially in Hamilton County, has always been a family that serves the community. I grew up around that atmosphere.”

While Russell was establishing himself out of college, he became immersed in the towns that he lived and worked in. He has and continues to be heavily involved in many community activities and civic commissions throughout Hamilton County. Russell served on the Grand Junction Task Force, coached girls’ lacrosse for eight years for both Noblesville and Westfield and still calls games for Hamilton County Television for H.S.E, Fishers, Noblesville, Westfield and Hamilton Heights for boys’ basketball, girls’ basketball and football. He sits on the planning commission in Cicero where he and his wife, Emily, live.

“I was an intern for the City of Noblesville in the economic development department when I was a junior in college,” Russell stated. “I fell in love with economic development. Again, I wanted to be a sponge and absorb, ask questions and learn. My first job was actually in staffing and recruiting, and I did staffing, recruiting, marketing and business development in my first two jobs. I had created a skill that the State of Indiana needs, which is finding a workforce and connecting a workforce. I was sitting at the table with C-level executives in these meetings, discussing how to find a workforce, and I could actually walk the walk and talk the talk. I know what it takes to hire people no matter the spectrum and find jobs and opportunities for them, so I became a resource.”

Through growing his business and personal networks, Russell has made connections throughout most of Hamilton County and has accomplished this by the mere age of 27.

“I know what the communities within Hamilton County are like because I have been a part of many of them,” Russell stated humbly. “For me, this role with OneZone is the biggest opportunity for me to grow in Carmel and Fishers because I think that means that I will have a true knowledge of Hamilton County. Having said that, I believe that businesses have no borders, and that’s why I partnered with Zionsville Chamber of Commerce while I was with Westfield [Chamber]. I also did a lot of work in Tipton County. If you look at the workforce, at just over 2 percent unemployment, how do you attract that next business to come here when there aren’t the people? When you start to think regionally, there is a larger number, so how do we achieve creating the workforce? With those connections that I have in Anderson, Tipton County and Zionsville, so we can have and have had that workforce conversation.”

Russell is often asked what he thinks is the best way to attract and retain young professionals throughout Hamilton County.

Russell continued, “While we’re trying to attract people to come here [to Carmel or Fishers], what we forget is that typically, it’s a team decision. There is a spouse and/or family involved in the decision. Not only are we trying to attract that person, but we need to ask ourselves what we are going to do to help the husband or wife also find a job. We tend to look at only the industry that we need, but maybe there’s also an opportunity to help the spouse. If both of them have a job secured, then it makes it easier to move. I listen to podcasts every morning on my way to work covering current topics. The biggest one they talked about today was how to attract someone to work in your community because nowadays the spouses are both working. We need to start thinking about how do we attract the family.”

Russell is always looking ahead at how to become innovative. “If Chambers live off of luncheons, then they will slowly die,” he said. “We [OneZone] have to become more innovative using technology and by thinking outside of the [proverbial] box. From a Chamber’s perspective, there’s other entities that are doing business after-hours and other things, so how do we become as effective as a Chamber? I believe it’s by becoming innovative, making touchpoints with businesses and connecting with those businesses. I’m a big believer in collecting stories and I started doing this while I was with Westfield [Chamber]. Because the moment that you become a resource for the community and share the stories of how businesses got started, both big and small, people will come and knock on the door and say ‘I’d like to move to Carmel or Fishers, Indiana.’ I share stories of how people got started and grew. People are attracted to that and become motivated to move and/or start a business in your area.”

Russell concluded, “No matter how big or small you are, if you can create that ‘Mayberry’ and make small-town connections, that’s what people want. They want that connectivity. It doesn’t always have to be business-to-business. It can be nonprofit-to-business or community-to-community. That’s what I’m doing now is putting myself into Carmel and Fishers and knowing the ins and outs, so that I can become that resource. We all want to share stories, and we all want to connect the dots. To me, that’s how you grow a Chamber. You can be strategic, and there is the black-and-white side of things, but you also have elements that put the color on the canvas.”

Russell is setting a productive pace for the next generation of Hamilton County leadership along with his mentors and peers. While he has aspirations for even higher offices at the State level at a later point in his career, what is certain is that Russell is leaving his handprints all over Hamilton County and is contributing to our county and state’s current and future workforce.