It’s Not a Hologram, It’s Better 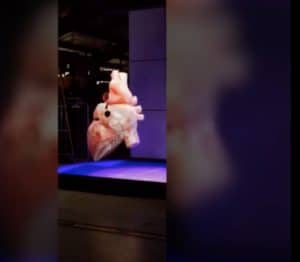 We first introduced Dream Store Media to our readers in our July 2017 cover story, “Hollywood Comes to Carmel.” Dream Store Media is an industry leader in video production incorporating 3D real-time graphics. It broadcasts augmented and mixed reality and virtual set design as seen in sports, corporate, and election coverage and offers its broadcast and corporate clients production, post-production, design and animation services, all in-house. The company has a global outreach with multiple production offices, including one in Carmel. Dream Store Media works with notable corporations such as the NBA, Eli Lilly and St. Vincent Hospitals.

Brett Gordeau is the CEO and cinematic illusionist at Dream Store Media. Gordeau shared that since 2016, Dream Store Media has been developing a new technology at its Carmel location. The technology breakthrough that Dream Store Media has developed is known as Augmented Presence Technology™-a headgear and handheld deviceless augmented/ mixed reality solution. This technology led to a partnership with Geniecast and the launch of Augmented Placement in Real-time (APiR), a product that is transporting objects and people all across the globe without them having to physically be onsite or ever leave their office. Geniecast is a company that is a one-stop-shop for world-class speakers, thought leaders and innovation in technology in terms of latency-free communication.

“It [partnership] has been one of the single most effective, brilliant, collaborative and enjoyable relationships that we’ve ever had in business,” Gordeau emphasized. “Their team is absolutely incredible and pushes the boundaries as we do. As we move into other versions of APiR, it just keeps getting better.”
Douglas Hall, EVP strategy and execution, added, “Our partnership with Dream Store Media couldn’t be more exciting or better timed. Connecting audiences around the globe to experts and thought leaders traditionally out of reach is only effective when the conversation and environment itself evolves. Through our shared vision of the most immersive and effective engagement and events, we can truly push the envelope on not only where people connect but how. Brett and his team’s focus on making pure fantasy a reality truly supports our mission in engineering engagements and conversations that drive results. Effective, efficient and economical solutions that wow audiences and provide client value is in the wheelhouse that we and Dream Store collectively share.” 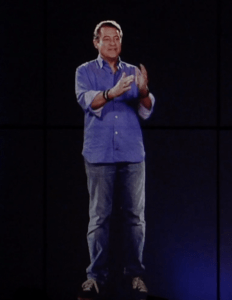 The first public demonstration of this revolutionizing technology took place at the 2017 Arch Grants Gala in St. Louis. Peter Diamandis, co-founder of Singularity University and founder of the X Prize Foundation (XPRIZE), appeared to have presented, on stage, a keynote to the audience in St. Louis, but in reality, Diamandis was presenting via a projection technique via Dream Store Media. Gordeau shared that some high-level attendees of that gala debated that Diamandis had indeed been there in the flesh performing that keynote. They were convinced that he had been real. In truth, he never set foot on that stage at any point that evening.

“Peter and XPRIZE are the greatest dreamers of our country,” Gordeau said. “I mean, you walk into their office and see SpaceShipOne hanging in their building, the very one that won the XPRIZE and was launched into our stratosphere. For us to have engaged with Peter and earn his belief and trust in our product is pretty incredible.”
Gordeau said that their idea of Diamandis being an augmented figure on stage at the Arch Grants Gala was met with “absolute excitement.”

“Once we had Peter and his team behind us, we knew what we had then,” Gordeau stated. “We had a technology and a platform that didn’t exist in the way that we built it.”
People have witnessed holograms over the decades, and some may recall seeing a hologram-type image of Tupac Shakur at Coachella. In actuality, the image of Shakur was not a hologram but an updated 2D-image and an updated version of a stage trick that dates back to 1862.

“That is not our technology,” Gordeau emphasized. “All we will say is that it is a projection-based technology that is conceptually very different than what everybody else does. We have leveraged our experience in delivering broadcast and corporate video and augmented/mixed reality and have developed a handheld device and glass-free mixed reality experience. Our setup is hours versus days. Peter had a very limited window of time of only 45 minutes. We had him in and out of the studio in 35 minutes.”
The stars aligned when Dream Store Media met Geniecast at the Arch Grants Gala. The fateful meeting of these brilliant creative minds let to their partnership and the launch of APiR.

APiR merges augmented and mixed reality technologies to create a lifelike, engaging experience for audiences anywhere in the world. A speaker can stand thousands of miles away yet still interact with the audience face-to-face and in real-time. APiR does not require handheld devices or bulky headgear, and with Geniecast’s technology, the experience is latency-free, creating a seamless and immersive experience not currently found anywhere else in the world.
After only five months of development between the two partners, Dream Store Media and Geniecast, APiR was ready to unveil its innovative magic to the world.
New York-based speaker Simon Sinek “appeared” in front of an audience that was attending the Annual ilearn360 Conference in Kolkata, India. However, he was speaking in real-time to the audience from NYC.

“Kolkata is not the most advanced city in India for technology,” Gordeau shared. “We had a mountain to climb. We went from the most congested internet city in the world [NYC], piping everything out that had to literally cross half the world, and we did it with one-second latency. That success is where our partner Geniecast comes in.”
Gordeau continued, “With our technologies combined, we can create a meaningful connection with the audience as though the person is truly there. We can create a two-way conversation, and people can ask questions of the speaker in real-time. The speaker can look at the person asking him/her the question, at eye level, and see the audience that he/she is speaking to. We have broken the laws of physics boundaries. They don’t apply to what we are doing any longer.”

As people begin to reevaluate their time spent on planes and traveling and learn more about how APiR technology can benefit their work/life balance, Gordeau and his colleagues are actively demonstrating and marketing to interested parties how the development of APiR can connect people in a different and much broader way.
For more information on Dream Store Media, its products and services, visit dreamstoremedia.com.