As parents, we are always looking for things that will have a positive and lasting impact on our children’s lives. Introducing your child at an early age to the wonderful sport of tennis can have such a great influence on your child’s life. Tennis teaches the child that getting off the couch and getting involved in physical activity can be fun. It also teaches young children respect for rules and the benefits of team activities. One of the best ways to introduce your child to tennis is to enroll them in one of the Junior Tennis Camps offered at the Indianapolis Racquet Club (IRC).

The IRC has been around since 1965. For nearly its entire existence, Ed Brune was the general manager and tennis director of the club. However, Brune recently retired and was replaced by Jamie Dieveney, coincidentally Brune’s son-in-law. 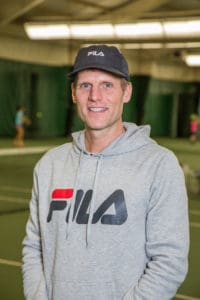 About a year ago, Dieveney and his family moved to the Indianapolis area from Seattle where Dieveney grew up. Prior to moving to IRC, Dieveney worked in a number of tennis clubs over the years and was the general manager of a large club in Seattle just before the move here.

In addition to having been a college tennis player with a 48-0 record, Dieveney is also a talented musician and singer. While he lived in Seattle, Dieveney was a member of an a capella group called “The Coats” that has recorded 13 albums and another group that is a Steely Dan tribute band called “Nearly Dan.”

Dieveney is taking what he has learned over the years in the tennis business and the entertainment area and applying it to the Junior Tennis Program at IRC. While Dieveney understands the need for first-rate instruction, which IRC offers, he also understands the importance of integrating entertainment into the program. So, with that goal in mind, Dieveney and his staff have designed a Junior Tennis Summer Camp with the goals to inspire kids that tennis is fun; educate them on the fundamentals, skills and the rules of the game; and celebrate the child’s participation and achievements in a team atmosphere.

Generally, the IRC Junior program is for kids ages 4-17. While tennis for a 4-year-old may sound daunting, the USTA, similar to basketball where the goal is lowered, has created a program for younger kids in which they use a larger and softer ball and a smaller court. Once they are 11 years old, they start using regular balls and full court size. 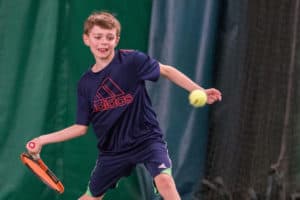 The IRC Summer Camps offer half-day options in the morning (9:30-11:30 a.m.) and afternoon (12:30-3 p.m.) as well as full day. Each day will have a different theme in order to keep the kids from getting bored with excessive repetition. The main objectives of the summer program are to advance a child’s rally development along with increasing their balance, agility and fitness.