What’s the Buzz on Bees?

It used to be that one would have to run through the clover patches with caution and never barefoot or risk the nasty sting of a honeybee. A generation later, most residential and commercial turfs are commonly treated to eliminate the pollinator-friendly vegetation that most homeowners consider unsightly and insignificant.

However, untreated lawns support several flowers that can provide food, both nectar, and pollen, for bees. Now begins the delicate balancing act of maintaining one’s green spaces without contributing to the colony loss that is affecting various species of bees the world over.

The rusty patched bumblebee gained federal protection when it was added to the registry of endangered species. This was the first time a bumblebee species in the U.S. have received protection under the Endangered Species Act, following an 87 percent decline in the species population since the late 1990s, according to the U.S. Fish and Wildlife Service (FWS).

Relatives of bumblebees, honeybees are facing their own litany of challenges. New parasites and diseases, growing insecticide use, changes in agricultural and beekeeping practices and the loss of flowered landscapes have taken a toll on bee health. For more than a decade, beekeepers have been reporting unprecedented die-offs – adult honeybees were vanishing from their hives. The term Colony Collapse Disorder is the phrase used by experts to describe the phenomenon that has been affecting the nation’s bee colonies and gaining the attention of beekeepers and researchers alike.

“Pollinators are essential to the production of food, and in the United States, honeybees pollinate an estimated $15 billion of crops each year, ranging from almonds to zucchinis,” said Dr. Ann Bartuska, USDA Deputy Under Secretary for Research, Education, and Economics in May 2016.

A few area residents are proactively assisting local honeybees by creating safe habitats for the hives, and the bonus for these folks is they are harvesting some incredibly delicious raw honey.

Matt and Amy Evans are local beekeepers and the purveyors of Woodland Honey in Zionsville. They are reputable vendors at the Zionsville Farmers’ Market, and Matt is an active member and mentor at the North Central Bee Keepers Club that meets at the Cool Creek Park Nature Center in Carmel. He maintains close to 200 hives throughout Boone and Hamilton Counties as well as one bee yard in northern Marion County.

Matt and Amy took us on a tour of their property in Zionsville, so we could get an up close and personal view of the honeybees building their hives. Matt also demonstrated some of the duties of a beekeeper while educating us on the life of a honeybee.

“The first pollen available in Indiana comes from the Red Maple trees,” Matt explained. “Those trees start to bloom in late January to early February, and the protein collected by the bees is brought into the hive and triggers the queen to start laying heavy again after taking the winter season off. Dandelions are a critical early source of protein and nectar. The Red Maples are mainly a source of protein, and when the honeybees are raising their young broods, they need a lot of nectar to feed them. Clover is also important forage for the bees. You can hardly find a bee in the clover today.”

For those who don’t have ample acreage to dedicate to wildflowers and “bee-friendly” forage, Matt encourages people who have common areas in their neighborhoods to work with their HOAs and plant more native, pollinator-friendly plants that benefit butterflies, bees, moths and other types of pollinators.

“It’s important for new beekeepers to know that in just about every county, there is a nonprofit club for beekeepers,” Matt stated. “The North Central Beekeepers Club that I belong to meets at the Cool Creek Park Nature Center where I also have two hives. Before the meetings, I am usually there, in my veil, and am available for anyone who wants to come early and learn. Mentorship is important in beekeeping.” 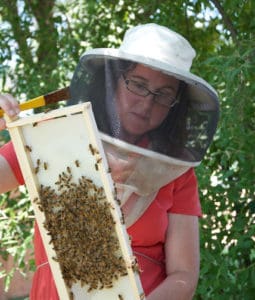 Matt emphasized the importance of beekeepers working with the local farmer and collaborating with them on the times that farmers spray their crops with insecticides that are harmful to the bees. He works with local farmers, Brent and Broden Smith, who farm over 12,000 acres and own several of those acres in Boone County. The Smiths work with Matt to identify bee yards on property that they either farm or own. The Smiths voluntarily spray their crops in the evening when the bees have retired to their hives. Matt suggested that if farmers would follow the labels on their sprays and be more aware, both the farmers and beekeepers can find a compromise that won’t negatively affect the crops or pollinators.

Another common practice for beekeepers is to relocate the hives to other areas of the country during specific times of the year. Matt will send his bees out to California to the almond orchards in the Central Valley. Almonds are the first pollen-producing crop in the U.S. Approximately 90 percent of the world’s almonds are produced in the Central Valley and require a pollinator. Honeybees are the most efficient pollinators. Matt sends his bees to California in November. Some beekeepers will take their bees to Florida for a month or two and build their colonies there until January.

Mark Plassman, a Zionsville resident, came into the business of bees in a rather unconventional way. Plassman is an owner in a partnership that owns 2,500-plus acres in DeSoto County in Florida. Six years ago, Plassman and a few of the partners decided to lease the land from the partnership and set up orange groves.

“We have local ‘boots on the ground’ who take care of the day-to-day operations of our grove,” Plassman said. “Beekeepers from Georgia approached our people and asked if they could bring their hives into our orange groves. The partners and I agreed to a deal with the beekeepers. In exchange for the use of our groves during certain times a year, we would receive some of the orange blossom honey that is produced. For the past four years, they literally bring a tractor trailer bed in with the hives and leave them for a certain period of time before taking the hives back up to Georgia. I found it fascinating that they continue to grow these hives and understand how important being able to use our groves is to the beekeepers and their colonies.”

Awareness and education are crucial to the survival of all pollinators, and organizations and agricultural colleges are doing their part by hosting special lectures and events such as Purdue Field Day 2017 hosted at Purdue University in Lafayette last month. The event’s keynote speaker, Dr. Deborah (Debbie) Delaney, assistant professor of Entomology at the University of Delaware, is a friend of Matt and Amy and was their guest while she was in town. Delaney has a Ph.D. in Entomology and is a renowned speaker and researcher on the evolution of honeybees, pollination ecology, population genetics of

honeybees in the U.S. and genetic characterization of unmanaged honey bee populations. She was invited to speak at Purdue and engage with beekeepers from around the state.

When asked where one should begin in the hobby of beekeeping, she replied, “It depends on what you are trying to support. If you are trying to support honeybees, they are looking for a large patch, and you will need to provide that for them. It’s not like you can just plant a native flower here and there. The honeybees need large patches to recruit their hives. The size of the area is really important.

“Now, if you’re trying to support bumblebees, depending on the species of bumblebee, they don’t require as large of a resource, so you can draw bumblebees in with a smaller patch of flowers or plantings. My talk was focused on the understanding that if you are going into beekeeping, then you need to be able to support them with the proper habitat. I talked about mapping your forage area around where you have hives and also talked about understanding what the quality of the habitat is. That included how to create forage maps and how to identify what the bees are bringing into the hive and at what time of year. This helps the beekeepers understand what the bees are dependent upon in their area. If you’re lacking what the bees need in those areas, depending on where you are, you can plant things to support your bees.”

“Beekeeping is becoming a popular hobby, and the interest in bees in increasing,” Matt said. “If someone is considering becoming a beekeeper, they should expect a big learning curve. It is not impossible to do, but it certainly isn’t as easy as keeping chickens.”