How We DID Help

Carmel Fire Department (CFD) and all six of its stations served as collection points for the Good Samaritan Network’s “Hurricane Relief” effort in conjunction with the Salvation Army Indiana Division and Midwest Food Bank. These efforts were a response to the call for supplies and food as a result of three unprecedented and devastating hurricanes that hit the continental U.S. and its territories in August and September this year. 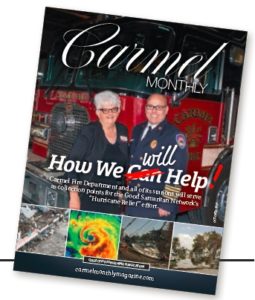 Hurricanes Harvey, Irma and Maria caused widespread and catastrophic damage. Lives were lost in each of these storms. Infrastructures were destroyed or critically damaged. Residents and businesses of those areas hit hardest are still in the process of rebuilding homes and structures and reestablishing their lives. But as Americans and the residents of Carmel do, people stepped in and donated to their fellow Americans and to the victims of these storms.

Major Beth Petrie, the divisional secretary of the Salvation Army Indiana Division, weighed in on the long-term effects that these storms will have on the victims of the storms and on the local agencies that are on the frontlines assisting with the relief and rebuilding efforts.

“When a disaster hits, the Salvation Army is already there,” she said. “We have a presence in virtually every zip code in the country. In cases such as these where we had lead time to prepare, we staged responses right there on the scenes. We had emergency response vehicles placed strategically, and water and food supplies placed strategically. We had volunteers ready on standby, ready to respond locally. These weren’t typical hurricanes. In the case of Texas, entire neighborhoods are going to have to be rebuilt. This is a really widespread and long-term event. The Salvation Army was already there, and we will continue to be there.”

The Carmel community responded almost immediately to the call for non-perishable foods and supplies to be collected at the city’s fire stations. “It is gratifying to know that our community has been able to make an impact on the lives of the people that were victimized by the hurricanes,” expressed Chief David Haboush, Carmel Fire Department. “We were able to help restore some sense of normalcy to the people who were affected by the devastation. When we put the call out, all six of our stations were eager and willing to participate in the relief drive.”

Haboush mentioned some of CFD’s own are members of Indiana Task Force One and had been deployed to the areas hit, including Puerto Rico, to assist other first responders and rescuers. The level of brotherhood and sisterhood that exists among firefighters and first responders transcends local, state and federal boundaries when crisis occurs. The residents of Carmel displayed that same level of care and compassion for people outside of their city and state.

Haboush expressed his sincere gratitude to everyone who donated and to the volunteers who picked up the food and supplies, so they could be delivered to the areas in need. “The call came out, and the donations began coming in from all over the community,” Haboush concluded. “Once again, it is a testament to the people who live and work in our Carmel community.”