Last month, the Carmel Fire Department (CFD) and the City of Carmel held an incredibly moving retirement ceremony for one of their own, Captain John Moriarty. Moriarty served as a firefighter for the department for 36 years and served for 35 as the department’s mascot, “Sparky.” He began his career with CFD in 1981 as a firefighter, worked his way up the ranks and ended his career as House Captain of Station 44. 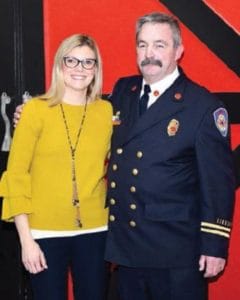 Those who attended the ceremony January 11 at CFD headquarters heard from the leadership of CFD, firefighters who worked alongside him, Moriarty’s son, Timothy, and from Kevin Bower, the father of Erin Bower Patterson whose life Moriarty helped save on April 17, 1989. Patterson was only 5 years old when a makeshift bomb exploded in a Kmart at Castleton Square Mall. The explosion left Patterson severely maimed and claimed her left hand and left eye.

Bower, Patterson’s father, is the executive vice president and COO of Pacers Sports & Entertainment and was one of the speakers at Moriarty’s ceremony. He surprised Moriarty with the news that a framed personalized Pacer jersey was being fabricated and would be presented to Moriarty upon its completion as a small gesture of the Bower family’s gratitude for his heroism and his years of service.

It was an emotional moment for everyone in attendance when Moriarty and Patterson embraced. It was the first time that they had seen each other since that horrific day 29 years ago. “We were honored to receive an invitation,” Bower said. “We’re so grateful for you [Moriarty] being there 29 years ago. We are so very grateful.”

Chief of Carmel Fire Department David Haboush shared Moriarty’s many achievements throughout his career as well as what impact he has made on the entire department over the decades.

“Words that I use to describe him [Moriarty] are loyal, dedicated, competent and committed,” he said. “John loved serving as ‘Sparky,’ serving as the department historian, and most importantly, he loves this community. His passion could be seen every day by ensuring that his firefighters were safe, healthy, knowledgeable and ready to respond to any 911 emergency. He and his crews brought a whole other level of customer service, setting the bar high and set an example for all of us in the department to follow.”

Timothy (Tim), Moriarty’s oldest son, addressed the audience and shared a story that his father had never been told prior to that day.

“Since I was a child, I have always loved the smell of a campfire,” Tim said. “I love the smell of a campfire in the woods, the backyard, anywhere. When I was in fourth grade, my class took a field trip to Conner Prairie, and my teacher, Sister Mary Margaret, saw me hanging out by the campfire and asked me if I was hanging out by it because it was warm. I told her no. Then she asked if it was because I liked the light of the fire. I said no. She asked if there was anything else about it that I liked. I told her that sometimes my dad had to leave in the middle of the night and I knew where he was going, and nothing scared me more. Every time my dad came home the next morning, he would kiss us, even if we were still sleeping in our beds. The smell of smoke would still be on him because he hadn’t showered yet. That smell would tell me that he was home.”

Tim addressed the firefighters who were lined up behind the seated audience. “For 36 years, you are the reason that he got home to us.” Father and son embraced, tearful, after those remarks. John stepped up to the podium next.

He shared several heartfelt acknowledgments of appreciation and gratitude for his fellow firefighters and for the CFD leadership. He also shared tender memories of his parents, siblings, wife and their children over the years and how they stood by his side supporting his career.

He concluded, “I would also like to thank the Carmel Fire Department, Chief David Haboush and all former chiefs for giving me the opportunity and chance of a lifetime. To all my fellow firefighters, those here on earth and those that have gone before us, I say thank you for all of your friendship, loyalty, kindness and love throughout my entire career. That being said, you are truly my second family.”