Have you experienced an immersive Virtual Reality (VR) movie or “stepped” into a video game, altering the perception of your environment? Today’s VR advancements are able to transpose an individual, taking them someplace else without physically leaving their current location, while Augmented Reality (AR) “augments” one’s environment by adding on to it. I met with Brett Gordeau of Dream Store Media in Carmel, and with the aid of a headset with goggles and a laptop, I “transported” into a whole other world, a virtual world.

The software developed by Dream Store Media made it possible for me to walk around a virtual operating room, complete with monitors, surgical tools that I could manipulate with control “joysticks” and a virtual body on an operating table. Through the goggles, I peered into the internal anatomy and explored, up close, the vital organs including a beating heart. The virtual heart was projected and I was able inspect it from a 360-degree perspective, viewing all the intricate valves, arteries, and chambers of the heart. It was an impressive and mind-blowing experience, needless to say.

A leader in this industry, Dream Store Media is expanding its impressive portfolio of production services and applying the technology that 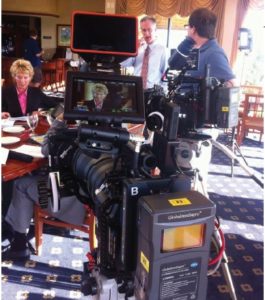 has been utilized in Hollywood film production for years toward the rapidly changing and competitive needs of corporations in Indiana and the world over. The company has a global outreach with production office locations in Carmel; Central Florida; Burbank, California; and Honolulu, Hawaii, as well as facilities worldwide.

As a leader in video production incorporating 3D real-time graphics, Dream Store Media broadcasts augmented reality and virtual set design as seen in sports and election coverage and offers its clients production, post-production, design and animation services, all in-house. Their motto is “We are disrupting the standard of video production, animation, and design.”

Currently, the VR/AR products available are app based, but Dream Store Media has leaped beyond what’s currently available on the market and developed a VR/AR analytics platform.

The three major arms that represent the broad base of the company’s areas of expertise are its Brand Aware Environments Production™; Video, Animation and Corporate Productions; and Healthcare, Pharma and Medical Animation Production. The technology driving its acclaimed and one-of-a-kind Brand Aware Environments™ production is not usually available outside of the film and television broadcast industry. They were the first company to introduce this technology to the corporate sector while maintaining its affordability.

The Healthcare, Pharma and Medical Animation production side provides its clients a rich, brand internal communication and educational experience through the use of HD video, AR, simulations and virtual productions. Customized programs incorporate compelling, entertaining

The third branch of Dream Store Media’s production services are based in Honolulu, Hawaii. This location is ideal for its clients who are looking to produce in the Hawaiian Islands for the advantage of production tax credits. 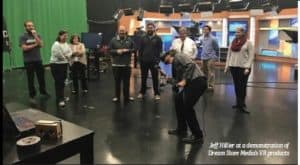 As Dream Store Media continues to expand, they looked at their Midwest location and realized the vast pool of resources in regard to Indiana’s three major state universities and the expansive list of relative degree programs that are available. The ability to hire degreed individuals within the state’s own talent pool would greatly reduce the state’s “brain drain” and provide employment opportunities for recent graduates. The executive leadership is also attracted to the pro-business climate and funding mechanisms that will allow the company to grow its operations in Indiana. Dream Store Media is also garnering the support of Mayor Jim Brainard and the City of Carmel as a premier and locally-based company.

Gordeau’s formal training is in Orthopedic and Brain Trauma/Neurology. A Carmel resident, he is a director, producer, and co-author and has worked for world-renowned entities such as Universal Studios, The Scientific World and CBS Television among other distinguished companies.

Gordeau met Dream Store Media’s Cofounder Jeffrey Hillier, Ph.D., CLO, while living in Florida and worked for him; Hillier was publishing science and medical journals. Gordeau worked on the news press side, producing news for clinicians and scientists in the early 2000s. It was a brick-and-mortar publisher, but their articles were disseminated online in the early days of digital publishing. The company was eventually bought out, and eventually, Gordeau and Hiller formed their company.

“It’s been an interesting road, but I believe that every road ties together for a purpose; for instance, how I met our Chief Technology Officer Chris Mapes,” Gordeau said. “I had been a script consultant for Hollywood, and I had also been a producer on some documentaries and worked for PBS. I met Chris through a colleague, and we found that our skill set was complementary. From there, we were like, ‘Let’s join forces and bring all of it together.’ Chris is amazing. You can take anything technology or healthcare-related, explain it once to this guy and he gets it. And then there’s Jeff who is this doctor and publisher, and he has this technology side of him that was rooted in programming databases. You blend all of us together, and the outcome is this really incredible skill set to develop VR/AR.”
Heading up the operations from the Carmel location, Gordeau discussed the company’s latest developments and the impact that it will have on regionally based businesses.

“Our expansion here is focused on the VR/AR, animation and creative services that we provide,” Gordeau stated. “We desire to pull in more 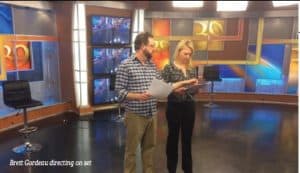 business from regionally based businesses. Our strategy for branding is based on the idea of edutainment, a phrase and practice coined by the inimitable Walt Disney. Our goal is to work the magic of broadcast quality HD or UHD, augmented reality, real-time 3D graphics, and animations to mesmerize viewers and elucidate the brand’s message in a matter of seconds. We disrupt the status quo of typical visual and digital storytelling.

“Brand Aware Environments™ works to create perceptions of value creating an authentic vision, built on a solid, robust and unique position that creates leverageable marketplace equity that is relevant and resonates with the client’s audience who matter the most. Dream Store
Media’s technology reduces significantly marketing, training and communication department expenditures.

“This technology has captivated audiences when watching films and live sports, creating a compelling and differentiated visual experience immersing the viewer with a relevant, focused physical and visual connection. Millions of sports fans enjoy on-field analytics, dynamics of play and all of the visual immersion in every single game they watch. Now Dream Store Media brings it to the corporate sector for sales events, branding, commercials, and training – anywhere where content needs to be memorable, connecting and resonating with the audience.”

This offering goes beyond branding; it illuminates a continuous marketing presence that forges deep connections with the client’s brand, corporate messaging or training through a unique visual presence that keeps the audience focused on the communication goals.”
Prior to forming Dream Store Media with Gordeau and earlier on in his career, the British native was once an acquisitions editor with Elsevier Science Publishers. Hillier advanced through the ranks and eventually became director of New Business Development in 1986. He eventually moved to Florida where his path crossed with Gordeau’s. Hillier is enthusiastic about the opportunities that may arise out of expanding the company in Indiana.

“The universities and the financing possibilities within the state were attractive to us,” Hillier stated. “We have access to engineers at Purdue, IUPUI and so on. Indiana has excellent medical schools, and we have access to the workforce, whether full-time or on a freelance basis, which is quite compelling. It’s an attractive part of the country.

“My role in the company these days is primarily administration, finance, legal and so on. We are acutely aware of how hard it is to attract top level engineers and IT people. If we can get access to a graduating pool with the kind of products that we make, which we feel are attractive to these next generations, we think that it is a win-win.”

Mapes has won several awards for his work in Hollywood over the years. He is based out of the California and Honolulu offices. He shared his observations on how the VR/AR technology has advanced and become more available in the consumer market in recent years.

“I’ve worked in Hollywood for 15-plus years and was working with VR early on for broadcast television and the use of camera tracking and its applications with 3D rendering,” Mapes said. “I’ve been involved with that since the early ‘90s. That experience led to some development opportunities, and we started applying those over the last few years. That has led to new applications and new market opportunities. Twenty-plus years ago, the market couldn’t bear this technology in a consumer market. At that time, you needed a $250,000 computer that was the size of a refrigerator to get graphics as good as you can get on an iPhone now. Today, it’s available to the consumer and is highly accessible.

“Through Dream Store’s proprietary trackless camera technology, we can create colorful worlds that differentiate a brand through our highly valued and robust technology. We can create these environments either on location at a corporate office, a large corporate event or conference, on a street or in our full virtual studio. Imagine we can take a conference or a shareholder meeting, placing the analytical data in 3D right next to the CEO without having to cut away from that most influential moment to flat full-screen video. Then broadcast live this high-quality video from halfway around the country or the world to viewers. We can do that.”

“It is about how we create the visual field, the digital story that won’t go out with a tiny puff of smoke or in an immersive experience that doesn’t sell,” Gordeau concluded. “It is about the ability to fuse creative, complex content and edutainment into one platform that creates an experience that speaks for itself.