Attention parents of pre-school age children-did you pick up your copy of this year’s “Countdown to Kindergarten” calendar? The Carmel Clay Public Library (CCPL), Hamilton County Head Start, and Altrusa of Hamilton County have partnered again to increase the distribution of this informative and activity filled calendar to ensure that the families that need this information the most can easily obtain one.

The Carmel Clay Public Library Foundation Director, Elizabeth Hamilton, shared with us the origination of the annual calendar. 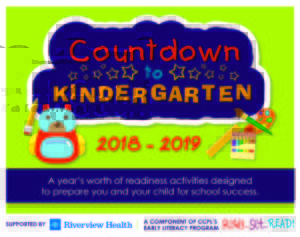 “The calendar has been distributed by CCPL for about seven years,” Hamilton said. “It is a collaborative effort between our Children’s and Graphics Departments. They wanted to make something that was visually appealing and provided information that families couldn’t live without.”

The “Countdown to Kindergarten” calendar begins in the month of August and runs through the following July.

“It contains helpful information and activities that are doable by any family regardless of income level,” Hamilton said. “There are activities and helpful tips on every page including a medical component. The library has partnered with Riverview Hospital this year and the calendar includes health and safety tips for parents and guardians.” 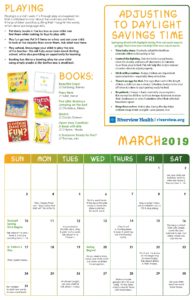 Hamilton explained that the library prints approximately 6,000 copies per year and the calendars are displayed in the Children’s Department at CCPL as well as distributed throughout the library’s programs.

Alexis, whose wife, Dr. Alice Johns, is also a member, first joined Altrusa fourteen years ago. Altrusa of Hamilton County is a club within an international non-profit organization whose focus is on making local communities better through leadership, partnership, and service.

“I saw the calendar that was being offered in Carmel and thought the world of it,” Alexis said. “I was really impressed with it. It occurred to me that it [the calendar] needed a slightly larger distribution and after a little bit of lobbying, we [Altrusa and Elizabeth] managed to raise some funds and print an additional run.”

Hamilton shared that she met with the CCPL Children’s Department, Communications Director and the

Library Director to discuss and gain approval to raise the extra funds necessary and print the additional copies to distribute out to libraries in Sheridan, Cicero, Westfield and Hamilton County Head Start in addition to Carmel.

“We printed 1,000 additional copies of this year’s calendar,” Alexis said. “Typically, we set our volume to match the anticipated kindergarten volumes in each of the school systems.”

One of the partnering organizations and distribution locations, Hamilton County Head Start, is a Licensed Center in Noblesville, Indiana. Head Start helps with children in the age range of six weeks to age five. 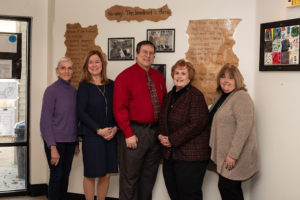 Pamela J. Le’al, director at Hamilton County Head Start, was ecstatic to distribute this year’s “Countdown to Kindergarten” calendars to the parents and guardians at the start of this school year at Head Start. Le’al emphasized that the contents of the calendar have a positive impact on childhood development, helps with kindergarten preparedness and falls in line with the center’s emphasis of literacy goals.

“Head Start was founded in 1965 under the auspice of ‘War on Poverty’ introduced by former President Lyndon B. Johnson,” Le’al said. “Head Start has been in integral part of the focus on children that are of lower income and their families.”

Additional members of Altrusa of Hamilton County, Gloria Del Greco, current president, and Nancy Moran, member and advocate, spoke about the importance of raising not only funds for additional prints of the calendars but also awareness throughout the county.

“I thought that the calendar was a great resource to bring the calendars here [Head Start] and to other communities in Hamilton County for kids and families who really need it,” Del Greco said. “Cole brought the idea to our Altrusa group and we all just picked it up and ran with it. One of the focuses of Altrusa is literacy so it [the calendar] was a perfect fit and represents everything we stand for.”

Moran added, “I was an Altrusa member in Waco, Texas where I was a federal attorney. I was transferred to Indianapolis and became involved with Altrusa of Hamilton County. I loved that the club was active and has an emphasis on literacy because that was one of things that we focused on back in Texas. It [literacy] is very import to me.”

The group emphasized that sponsorships for next year’s calendar are available and encouraged from corporations, local businesses and individuals who are interested in being a sponsor.

The 2018 “Countdown to Kindergarten” is available at the Carmel Clay Public Library and the libraries in Cicero, Westfield, Sheridan and at Hamilton County Head Start-while they last. Next year’s calendar will be available by August of 2019.

For those interested in becoming a sponsor of next year’s calendar, contact the CCPL at 317-814-3900.  For more information on Altrusa of Hamilton County, membership and/or book calendar donations, contact its president, Gloria Del Greco at 317-753-5747. To learn more about Hamilton County Head