You’re not going to want to miss this year’s Tinsel and Tails Holiday Petacular, the Humane Society for Hamilton County’s (HSHC) annual fundraiser that will be held November 15 at The Ritz Charles in Carmel. This year’s attendees will be among the first to see the public unveiling of the finalized plans for the new shelter. 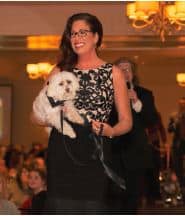 HSHC Executive Director Rebecca Stevens announced earlier this year that the HSHC capital campaign was officially underway. As always, Stevens, along with HSHC board members and staff, have been working diligently toward their fundraising goals, not only for the capital campaign but for their many wonderful and life-changing programs and the general operating budget.

It is surprising to learn that many people do not realize that the HSHC is responsible for receiving ALL animals that are brought in by animal control for the entire county.

HSHC conducts this ministry for animals seven days a week while operating in an inadequate facility with significant spatial and operational challenges, such as no proper quarantine area, no recovery area for the injured, no onsite surgical area, no outdoor green space for dogs to exercise and a litany of other basic necessities that would drastically improve the quality of living for the animals as they wait for loving homes at HSHC.

HSHC has evolved into one of the country’s few open-admission, truly No-Kill shelters with the hard work of its dedicated staff, board and volunteers. Several surrounding area county humane societies and shelters will often send HSHC the animals in their custody that would otherwise be euthanized. HSHC needs the help of this county to help raise the funds, so the new shelter can be constructed for the betterment of its animals.

Stevens and Barnard met at the Humane Society of the United States conference.

“Rebecca and I talked about the project,” Barnard said. “She later introduced me to her advisory committee, and they ultimately decided to engage us to help them, which we have been doing.”

Barnard has been impressed with Steven’s work ethic and dedication to the shelter as well as her exceptional organizational skills.

“She is one committed soul, I’ll tell you,” Barnard expressed. “There are so many different things that the [HSHC] current shelter does not provide. We have worked with over 750 different groups across the nation, and we’ve seen a lot of stuff.”

Barnard shared a brief history of how shelters across the nation were trying to hide the fact that they were euthanizing as many as animals as they were. “It wasn’t that long ago as a nation, we were euthanizing 20 million animals a year, which is staggering, and for the most part, the general public didn’t know that was going on,” Barnard said.

Barnard explained that as a whole, the awareness of animal welfare and what was going on has been put under a spotlight, and those staggering numbers are decreasing.

“I think, for the most part, people recognize that rounding up cats and dogs and killing them is probably not a good public policy,” Barnard stated. “The legislative component is an important ingredient in reducing the overpopulation of dogs and cats. Do the laws that are on the books reflect a progressive approach to this issue? Statistics and information are important in animal welfare. I can’t overemphasize that Rebecca is a well-organized executive director. We request a lot of information prior to coming out and meeting, and the information that she provided was so well-organized, we could tell that she cares about the facts. In our experience, that is not always the case.”

Barnard stated a few seemingly obvious components that will be part of the new shelter’s design that included but were not limited to:

According to Stevens, “It is our most popular fundraiser in terms of selling out, and people tend to go every year because it is a unique event,” she said. “The feedback that we get tells us that people love to come because of the stories that are shared. We tell the year’s most remarkable pet adoption and pet survivor stories. Many of the stories shared are about the person that adopted and the impact that it has 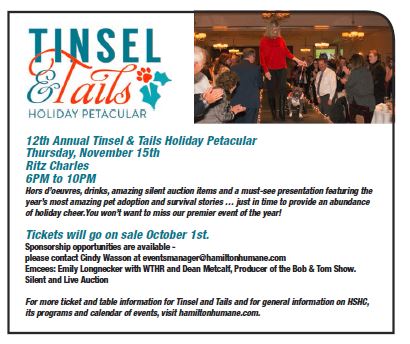 had on him/her, and those include some of our veterans’ stories.”

The animals and people whose stories are featured that evening then walk a runway through Ritz Charles.

Stevens concluded, “We have been working on a super tight timeline with the capital campaign and building committee to complete the rendering of the actual design, so we can present to our attendees the evening of November 15. It has just been a sketch and a vision until now, and this will be the first public viewing of what we want to build. It is going to be a big night.”

For more ticket and table information for Tinsel and Tails and for general information on HSHC, its programs and calendar of events, visit hamiltonhumane.com.