From the Halls of CHS to Oscar Red Carpet 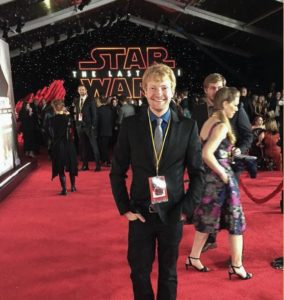 The halls of Carmel High School (CHS) whisper their stories about the incredible students who once walked those halls and went on to leave their imprint on the world. One such story takes us back to 1997 when a young trumpet player and ambitious animator, Matthew (Matt) Shumway, was preparing to launch his career.

In high school, Shumway was a member of the Carmel Marching Band. He was presented with The Richard Saucedo Distinguished Alumni Award in 2017, a prestigious award presented to a Carmel Marching alumnus who graduated more than 10 years ago and has demonstrated the concepts of the pursuit of excellence, dedication and commitment in their work, community and life. Shumway was unable to attend due to a prior obligation, but his parents, Gary and Karen Shumway of Carmel, accepted the award on his behalf. The award was presented by Michael Pote, Director of Bands, who was one of Shumway’s former teachers and band directors.

“Matt was obviously talented in relation to the graphic arts, and you could tell that was going to be his path,” Pote said. “He had a love for that and had already invested a lot of time in setting himself up to be prepared for that.”

Pote recalled that Shumway designed “spirit” shirts for his section, a long-standing tradition among the band students and their respective sections. For one of those years, Shumway designed a caricature of Pote. “For a couple of years, Matt was obviously the designated artist for his section’s shirt,” he chuckled. “One year, the design was literally a caricature of me and some funny or rather annoying things that I would say. He was able to use one skill for the benefit of the other. Matt’s strength was bringing his other strengths to the benefit of the entire group.”

As proud mothers often do, Karen spoke about her son’s achievements, both professionally and personally. “All three of our kids are very ‘artsy,’ Matthew being the most talented as far as his art goes,” Karen said. “It wasn’t too hard to be supportive of that. It was a surprise when Matt was awarded the Alumni Award. I have to tell you that award that they gave him is beautiful. He displays it in his house along with his Annie Awards and other things from the Oscars. Matt was so excited to get that award from CHS. We are very proud of his accomplishments, both professional and personally. He is married to his wife, Amy, and has a beautiful little girl, Lyla. [They] live in San Francisco. It’s pretty hard not to be proud of everything he has done.”

Shumway emphasized that he always had the support of his parents. “My parents have been 100 percent supportive of me,” he said. “I never felt any resistance for wanting to do this, and I know I’m lucky because not everybody has that support.”

The Award-Winning and Academy-Nominated Artist

Shumway began college at Savannah College of Art and Design, but in 2000, he transferred to ArtCenter College of Design near Los Angeles. He graduated with Distinction three years later.

After graduation, Rhythm & Hues Studios, one of the top visual effects companies at that time, offered Shumway a job. His first job at the studio was doing Digital Matte Painting for “X2: X-Men United.” Following that project, Shumway was given the opportunity to transfer to the Animation Department as an animator on “Garfield: The Movie.” Garfield had always been special to Shumway who had spent a lot of time in his youth practicing drawing the famous Hoosier cat.

“I wanted to get into animation ever since the fourth grade,” Shumway said. “Drawing was something that I’ve always enjoyed doing. I started drawing Garfield because he was a simple character that I could figure out how to do. I fell in love with the Disney movies in the 1990s and was fascinated that you could take a drawing and make it move and come to life.”

Over the course of 10 years, Shumway worked his way up the ranks while honing his craft. He worked on many films during these years, including “The Chronicles of Narnia,” “Night at the Museum” and “The Incredible Hulk.”

In 2007, Shumway was part of the supervisory team behind the Academy Award-winning “The Golden Compass.” Various talking animals, including monkeys, cats, ferrets, birds, dogs and wolves, were among the characters he supervised on the show. For his work on the 2004 film, “The Chronicles of Narnia: The Lion, the Witch and the Wardrobe,” Shumway received an Annie Award nomination for his animation on Aslan, the great lion.

In 2012, Shumway was an Animation Supervisor on the highly acclaimed “Life of Pi.” His team led the development and animation of the film’s central character Richard Parker, the Bengal tiger. Shumway worked on the development of the other animals in the film as well, including the orangutan, zebra, hyena and the cast of meerkats. His work on the tiger earned him a 2013 Annie Award.

In 2013, Shumway’s reputation for a strong work ethic and brilliant artistry landed him an opportunity to work at Industrial Light & Magic – the famed studio of Star Wars – where he contributed to “Teenage Mutant Ninja Turtles” and “Jurassic World.”

The supervisory animation work that earned Shumway and his team an Academy Award nomination for Best Visual Effects was on “The Revenant.” Fans of the movie may recall the famous scene where the bear attacks Leonardo DiCaprio. This was the work of Shumway and his team. That work also led to several awards, including the Annie Award, the highest award in animation, and the Visual Effects Society Award for Best Character Animation. While Shumway and his team did not win the Oscar, the experience and thrill of walking the red carpet, not once but multiple times to “make the most of the experience,” will be one that Shumway will cherish for the rest of his days. 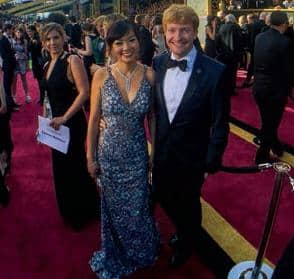 “‘The Revenant’ turned into such an interesting project,” Shumway said. “I got to go on set and see Leonardo DiCaprio act in person. The whole experience was a great education for me. My team and I were incredibly lucky to be considered and accepted for an Academy Award nomination, and that, I have to say, was quite an exciting moment when you hear your name on TV as being nominated. That was pretty cool. My wife, Amy, and I kind of lost our minds, and then we made pancakes. It was super surreal. You get invited to a lot of the Oscar-related parties and events. It is as fun as it sounds.”

When asked about walking the red carpet at the 88th Academy Awards, Shumway described the incredible scene. “It is insanity on the red carpet,” Shumway exclaimed. “TV doesn’t do it justice as to how crazy it is. We did a couple of interviews, which was fun. It was so chaotic. My wife and I milked it; we went all the way down the line and ran back up to do it all over again. I didn’t know if I would ever be able to do it again, and we had fun with it.”

After “The Revenant,” Shumway was approached to work on the then-untitled Hans Solo film as the overall animation supervisor. As a result, Shumway and his team were also asked to work on parts of “The Last Jedi”, including the epic Battle of Crait at the close of the film which was released last December.

“I was asked to be part of the ‘Solo’ movie, which we’re deep into right now, to be an overall animation supervisor. I’ll keep an eye on all the animation throughout the movie, which is daunting but pretty awesome at the same time.”

Loyal fans of the Star Wars series and of Shumway can see his work in the film that will be released this coming Memorial Day.