GHDT Presents “A Night in India”

GHDT performs a wide variety of styles of modern dance, theatre, ballet, and ethnic dance forms in Carmel and has toured Europe and other countries. The company is especially known throughout the United States and India for presenting programming that features the culture, music, dance and history of India. GHDT will be closing its 2016-17 season with ‘A Night in India.” The world premiere of this spectacular performance of inspired dance, brilliant lighting, exquisite costumes, and vibrant music will delight audiences June 9 and 10 at The Tarkington in Carmel.

GHDT’s founder and artistic director, Gregory Hancock, sat down with us to discuss why it is important for his company to present “A Night 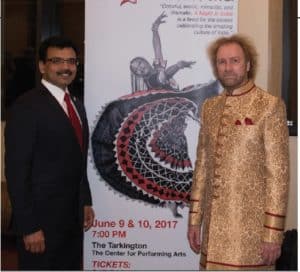 in India,’ a unique fusion of modern dance, classical Indian, Bollywood and other styles of Indian dance. “I’ve had an interest in the Indian culture for a long time,” he said.

I’ve been working on combining themes, culture, and music and art of India for several years. I have an affinity for the Indian culture and other cultures as well. We’ve done programs on eastern European, Mexican and other cultures, though I have a strong connection with India.”

Hancock has made several trips to India, and he inserts a little more into his work after each visit. “Every time that I go to India, it influences me in some way,” he said. “I bring something back. It doesn’t always manifest itself right away, sometimes it’s a year later, sometimes a month later and sometimes it’s instant. India is so colorful, but it is also spiritual. It’s grounded, earthy and chaotic and all those things are what makes it India. I wanted to bring a more comprehensive program than what we’ve done before to our audiences.”

“A Night in India” will be a collaboration of classical Indian, Gypsy, Bollywood and other genres of music. “I wanted to highlight the richness of the culture and the music,” he said. “I have included a couple of pieces of Indian-inspired music that are inspired by Indian music but are set to western music. There will be colorful and high energy pieces but there will also be quieter and more introspective kind of pieces with a wide range of emotions throughout the production. Hancock continued, “The costumes, which are made in-house, are colorful and intricate with a lot of heavy jewelry. It is important to me that our company always performs heavily costumed. There are a lot of companies that are sleek and perform in simpler attire, but I like for our company to ‘look’ extravagant to enhance the performance. I want to do a more encompassing program of India, which is nearly impossible to achieve because India is so diverse.

“There is so much diversity in India. There are several languages and each region is completely different in its food, culture, music, and art. In a two-hour program, I am doing as much as I can to showcase the diversity of India. Our supporters have always been embracing of diverse cultures and ideas. They understand that we are a global community. There is so much art, history, and spirituality outside of the
U.S. that we can explore. With what is going on in the world, it is an appropriate time to talk to talk about diversity,” he said.

The GHDT Board of Directors president, Ivy Heazeltine, spoke about what people can expect from this performance. “Sometimes when people think of “A Night in India,” they will think that it is a classical or traditional Indian performance. “A Night in India” is more than that. It will be visually stimulating and the music itself will be diverse. It will appeal to a broad range of audiences. It will loop in the Indian culture, but it will be appealing to a general audience as well. One of Gregory’s many talents is that he is a fantastic storyteller. Whatever is created, there is deep meaning to it and a story that can be followed and easily connected with.”

Raju Chinthala, a longtime friend of Hancock has recently joined GHDT’s board of directors. Chinthala is a Speech Language Pathologist (Dysphagiologist) and American political advocate. He is the founder of Chinthala & Associates speech pathologist firm and founder of the Asian-American Indiana PAC. Chinthala is a member of the Mayor’s Advisory Commission of Human Relations and represents many Indian cultural committees and boards that focus on India-Indiana business and economic development.

“I have lived in Indiana for 21 years and am active with organizations such as the IN/India Business Council,” Chinthala said. “Indiana is becoming the ‘Silicon Valley’ of the Midwest and is bringing IT related companies to Indianapolis and to Carmel. It is important to celebrate the cultural ties between Carmel and India. The Indian residents that live in Carmel represent 29 different states within India.
There are thousands of languages in India, and each of the 29 states have different foods, costumes,
music, and traditions to celebrate.” 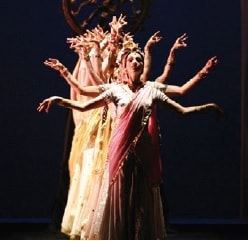 Chinthala met Hancock 11 years ago when GHDT performed for the India Association of Indianapolis. Hancock and his company were performing as part of the Diwali celebration, the annual Hindu festival of lights celebrated in autumn in the northern hemisphere (spring in the southern hemisphere). Chinthala was impressed with Hancock’s choreography skills, team, and his concepts.

“I call Gregory my brother from another mother,” Chinthala said. “Gregory and his company have performed and continue to perform for many India cultural programs, weddings, and private parties. He understands the vast diversification of India. India is the largest democratic country in the world and the second largest population with 1.3 billion people.

There are many cultures, languages, and costumes to celebrate. The Indian influence can be seen with people learning more about Yoga and meditation and even with spices. One of the top spices sold in 2016 was turmeric—an Indian spice. It is my goal, as a board member, to bring together the philanthropists and garner long-term financial support of GHDT’s cultural celebrations and performances.”

For more information on the upcoming performance, A Night in India, visit www.gregoryhancockdancetheatre.org