The Story Behind the Steel

Perhaps you have seen his brilliant steel artwork promoting local brands and brews in various area restaurants and breweries. Gavin Goode’s artistic mark can be found throughout Carmel and the surrounding areas in places that may not always be so obvious but are evidence of the current art movement that continues to develop within the Carmel Arts and Design District.

Growing up in Shively, a suburb of Louisville, Kentucky, Goode knew that there was more beyond the horizon awaiting him. He graduated early and enlisted in the U.S. Marine Corps where he served overseas in Albania in 1995. Goode was meritoriously promoted three times, including once as a noncommissioned officer. Goode used his GI Bills to attend the International Academy of Design & Technology in Tampa, Florida. While he realized his passion for art, he decided he didn’t want to get into “commercials and cartoons.” While he was seeking out his purpose, fate took a random turn in Goode’s life that completely changed his trajectory and set him a rather unique course.

“I happened to get a very random chance to double as Orlando Bloom and Jed Rees in the movie ‘Elizabethtown,’” Goode said. “The movie was filmed in Louisville, and I was back in town painting life size horses for a project. I was a body, stunt and photo double for these guys in the Brown Hotel scenes. The film crew were super cool people and offered me the opportunity to do more movies if I was willing to head down to the next project with them.”

“I played a ringside photojournalist in ‘Rocky Balboa,’ and I remember inserting a memory card into the camera that I used as one of my props. I wasn’t going to miss that opportunity to take 1,000 pictures of everyone, up close and personal,” he admitted. “I was also in ‘Wild Hogs’ that was filmed in Los Angeles. I played one of the Del Fuegos, a ‘bad’ motorcycle gang.”

Goode shared about his experience working with some of Hollywood’s superstars. “Samuel L. Jackson smiled a lot but kept to himself while we were on set,” he recalled. “Sometimes we would wait up to 15 hours and then film for three hours straight. Then you wouldn’t see anybody for an entire day. Ice Cube was cool but was also a quiet guy. Orlando was another quiet guy, but they were all really cool. Clooney was the coolest cat by far. He is super down to earth, and we talked about Kentucky football and why they still weren’t any good.”

At that point, Goode thought that he had found his path and was going to be a successful actor, but the realities of that life soon became apparent. Without representation and financial resources to cover the expenses of traveling on location and daily living, Goode found himself reevaluating his dream of acting full-time and setting the world on fire.

“L.A. sent me back to the Midwest with my tail between my legs,” Goode said. “I knew that I wanted to station myself back in the Midwest  and be close to Cincinnati, Chicago, Indianapolis and Louisville. I came to Carmel with Justin Escue who is the drummer for the band PictureYes who tours with Saving Abel. After I moved to Carmel, I did a few independent films like ‘Open Mic’rs’ that Justin and I worked on in 2006, but it never went anywhere, so I started a little painting company in Carmel, Semper Fly Studios, doing interiors and exteriors. I began doing faux finishes and murals soon after.”

Goode’s reputation for his quality of work and attention to detail soon took off, and he began doing work for large companies and painting on more challenging surfaces such as aluminum, an incredibly difficult surface on which to paint.

“I do a lot of faux finishes and glazes,” he explained. “There are still a lot of requests for murals, but I am trying to focus on the commercial 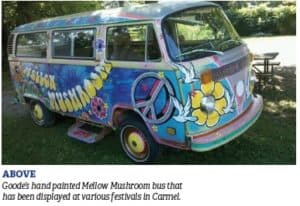 work like the steel signs that I’ve been doing for local businesses, restaurants and breweries. I also like to put art on vehicles and motorcycles. I exhibit in the local festivals like Artomobilia and the Carmel International Arts Festivals. I’ve exhibited a hand-painted, Mellow Mushroom bus on what was the Lazzara lot that is currently under development by the Monon during the festivals.”

Festival-goers may also recall his “Mad Max” motorcycle that he’s displayed in the past. At last month’s Artomobilia, Goode exhibited a couple motorcycles from his personal collection that he has painted as well as a signed Ducati bike that was previously owned by the late MotoGP racer, Nicky Hayden, who was killed earlier this year in a bicycle accident.

Taking advantage of the wave of opening breweries and restaurants around Indy, Goode has been fabricating with steel and painting some rather unique pieces to promote a variety of products. He is finishing a remarkable “Buddha” steel sign resembling David Carradine from “Kung Fu” for Danny Boy Beer Works’ distilled vodka that will debut in Carmel. With the upcoming release of their signature vodka, Goode has created a sign that will catch the eyes of the patrons and create a visual buzz while people enjoy the beverages.

Goode has access to build and create in a 100,000-square foot steel factory in Indianapolis and has every kind of tool that one could think of. All his intricate work is done by hand; no air brushing. He burns on leather and paints on humans as well. The recent upward trend of cosplay has proven to be a revenue generator for artists like Goode, especially during the Halloween season.

When he’s not out painting the town and its people, Goode and his fiancée are all about giving back to their community. They volunteer together for local causes, including making dog treats out of spent grain at Union Brewery in Carmel for the Hamilton County Humane Society. Goode has also donated themed art for the Sweep Away Cancer fundraiser, a traveling national fundraiser that is organized by people in the chimney sweeping industry to help raise funds for research and a cure for breast cancer. Last year’s pieces by Goode were auctioned off for nearly $40,000. Goode also finds a sense of purpose working with veterans and their families on special projects and helping families who are struggling while their loved one is serving overseas or dealing with illness and related hardships.

He is grateful for all the opportunities that Carmel and his clients have presented him. “Carmel has been amazing, and everybody has been super inviting and cool here,” he emphasized. “I tend to stand out and yet, I just kind of fit right in. I have the connectivity to anywhere I want to be and can get to bigger cities while enjoying the comforts of living in the Midwest, and that’s all right by me.”
Contact Gavin Goode at semperflystudios@gmail.com