During the first chapter of his professional career, Gary Brackett drew a favorable reputation of playing with passion, performing without fear and being totally prepared for game days.

Those three assets underlined the attributes unleashed by Brackett during his nine years in the National Football League when he started and starred for the Indianapolis Colts. This was the same Gary Brackett who went undrafted and was a giant question mark to make the Colts’ roster in his rookie season in 2003.

Nowadays, Brackett continues to draw a favorable rating in the second chapter of his professional life. He still plays with passion, still performs without fear and still prepares for game days. The only difference is that now the 35-year-old Carmel native oversees eight central Indiana restaurants and is mapping out strategies to grow to over 20 Hoosier dining establishments by 2019. This is the same Gary Brackett who entered the restaurant business with little background and perhaps a target to misfire on this new and challenging occupation. 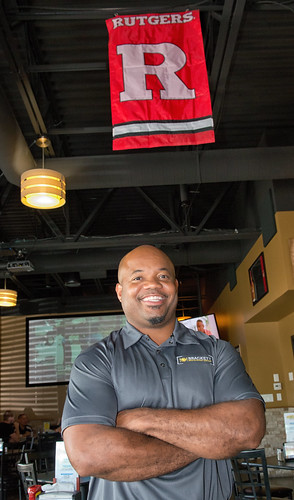 “Joe Jefferson told me that one day, we all go out into the real world,” remembered Brackett of a conversation with a former teammate with the Colts, “and that I shouldn’t let football define who I was. At that point, I knew I had to come up with something that I could enjoy after football.”

That opportunity came when he became partners with Chris Long, a longtime central Indiana restaurant operator who started opening up the Stacked Pickle franchise in the metro Indianapolis area. Eventually, Brackett bought out Long, took on a new partner (Jeff Smith) and dove head first into the restaurant and entertainment business. He and Smith own six Stacked Pickles (including ones in Zionsville, Carmel, Fishers and Greenwood). Future locations are scheduled for Southport (the first free-standing facility), Westfield and West Lafayette.

And more expansion is on the horizon. Brackett and Smith, a former executive at Outback Steakhouse, Applebee’s and O’Charley’s, plan to open up three new outlets in each of the next five years. Possible sites include Fort Wayne, South Bend, Bloomington, Terre Haute, Plainfield and Evansville.

But both are cautious in their dreaming.

“We have a system that we believe in,” said Brackett. “I am fascinated with the business, but we operate with very low margins, so there is no room for error.”

Meanwhile, Brackett and Smith have expanded into another restaurant venture. Georgia Reese’s Southern Table and Bar boasts two locations, one on 86th Street on the northside of Indianapolis and the recently opened downtown location on Washington Street.

There is frequently live music played for background. Georgia Reese’s was recently featured on Julia Moffitt’s What’s Cooking segment on WTHR, and Brackett is scheduled to be interviewed for Inside INdiana Business in August. He chats business, not football.

The two restaurants cater to many different dining audiences. Brackett says that for lunch, the Stacked Pickle is a place where people “want to get in and get out.” The dinner crowd looks for fair pricing and quality. In a recent tasting session at the Zionsville location, Brackett and Smith tasted potential future products.

“You really want to have something on the menu for everyone,” said Brackett. “We believe we need to continue to cater to more women with our salads and wraps.”

As for Georgia Reese’s, Brackett admits people should be prepared to embark on an eating adventure with heavy food entrees.

“You want to loosen your belt,” confessed Brackett, who proudly claims the restaurant has a sizzling Sunday brunch menu. “The recipes are original, and the restaurant is very unique. We have meatloaf, catfish, chicken, shrimp and more. It is not just another soul place.” 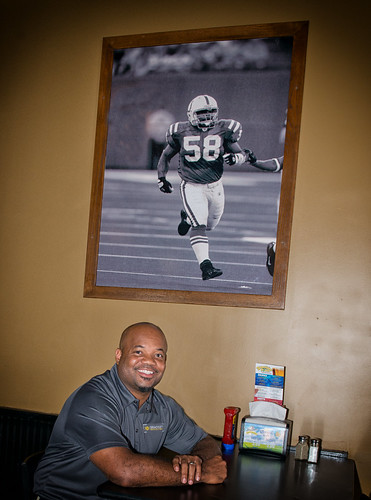 Brackett is also not just another soldier of football. Besides graduating from Rutgers (yes, there is a Rutgers banner in the Stacked Pickle), he earned his MBA in business economics from George Washington University. He also married his wife Ragan, a Brebeuf and Indiana University graduate who is now a doctor at Community East Hospital. Besides their daughter Georgia, there’s also 6-year-old Gabriel and 3-year-old Gary, Jr.

Other family members are the expanding restaurant homes. The Zionsville location sits a mile from Brackett’s Carmel home, allowing him to visit the location morning, afternoon and night. He uses the visits to reinforce to staff his marketing and sales philosophies.

“People are searching for a purpose, and operating the restaurants is my purpose,” said Brackett. “I love inspiring people and am humble enough to listen to them. Yelling and screaming won’t make people work harder. I like to say that I may have bad moments, but I never have bad days.”

Brackett maintains that focus even when he stirs late at night and goes to the computer to review sales at the restaurants.

“P and L [profit and loss] statements are brutally honest,” Brackett said. “They are your scorecards and are our wins and losses, but you also have to realize that they are not the final destination. You can make things better.”

Brackett remembers lessons learned from his football career, which ended after undergoing eight separate surgeries. (“Some days, I feel like I am 51 and not 35,” he admitted.)

Football can be one play a time. Restaurants can be one customer at a time.

“Competition is tough, but competition is tough in every business,” Brackett noted. “We try to value every client and try to break everything down to see what is attainable. How can we get six extra people in for lunch or dinner?”

In this area, Brackett reads and observes other success stories. For example, former NBA star Junior Bridgeman owns over 200 restaurants (many of them Wendy’s) and is estimated to be worth $400 million. However, Brackett also calls on his own persona. This one bubbles with enthusiasm… just as it did during his NFL days.

“I believe in being engaged,” said Brackett after greeting guests at the Stacked Pickle on Michigan Road. “People want to be around friends and friendly people.”