FootGolf at Wood Wind Golf Course: A New Take on an Ancient Game

When I first heard the term, “FootGolf” I naturally thought of some of my more notorious golfing partners whose liberal use of the “foot mashie” to improve their lie on a golf course could easily be termed FootGolf. However, the folks at Wind Wood golf course recently introduced me to a new sport that is taking off across the country that combines golf with the growing popularity of soccer known as FootGolf. 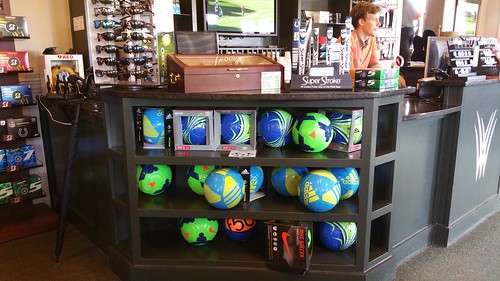 As you might expect, FootGolf is played on a regular golf course, but uses #5 soccer balls instead of golf balls and the ball is advanced to the 21-inch cup by kicking the soccer ball instead of using golf clubs. As in regular golf, the FootGolf course is designed with par-3, par-4 and par-5 holes that measure approximately 100 yds., 150 yds., and 200yds, respectively. Unless you are an accomplished soccer player who can kick a ball a mile, your typical “birdie putt” in FootGolf is normally 20-30 yards from the hole. This may sound like a “gimme”, given the size of the hole, but I am told it is very difficult. Unlike a round of regular golf, which on a good day takes four hours, a round of FootGolf can usually be finished in two hours.

According to Scott Heger, Wood Wind’s Director of Golf, the FootGolf layout at Wood Wind that opened last spring has been particularly well received because of the added difficulty the up and down terrain the golf course provides. In fact, Heger noted, that on one particularly elevated hole a poorly placed shot can result in your soccer ball rolling all the back down the fairway hill. Water hazards are not part of the FootGolf course at Wind Wood, but sand traps are.

FootGolf, like regular golf, can be a very social event. Heger is getting requests for FootGolf outings and has scheduled several. A FootGolf outing is a new and fresh idea for a social outing that, unlike golf, can include everyone. The only requirement is that you can kick a ball. Anyone who has played in a regular golf scramble that has turned into a six-hour-death- march will appreciate the projected two-hour completion time for a FootGolf outing. 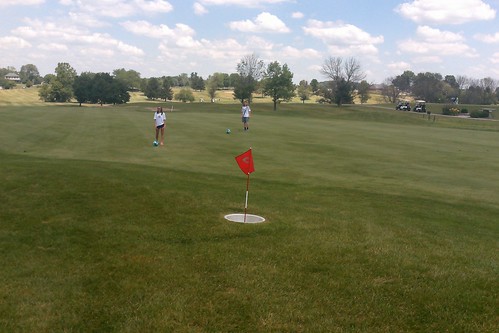 I spoke with Mike Boedeker, a 40 year old who is an avid golfer and member of the Wood Wind Men’s Club, about his experience playing FootGolf. Mike has played footgolf a few times, with a foursome of men and with his children as a fun afternoon activity. Boedeker told me that he had a great time and that the degree of difficulty is deceiving due to the size of the hole. Even though the hole is 21 inches in diameter the soccer ball tends to bounce more than a golf ball and this makes it harder to sink a long shot than it would appear on first impression.

Just as golf has the USGA as a sanctioning body for the sport, FootGolf has the United States FootGolf Association (USFGA). On September 19, Wood Wind will host a sanctioned USFGA tournament that is a qualifying tournament for the national championship.

If you’re looking for a great social or team building event or a great way to spend some time in the outdoors with you kids, think about a FootGolf outing. For more info go to woodwindgolf.com/foot-golf/pricing-and-hours or call Wood Wind to reserve a tee time at 317-669-8550.