Becoming a crime statistic is one of the worst feelings imaginable. It’s like a quick punch to the gut that leaves a nasty, empty feeling behind. I’ve been there. You may have too.

The morning I realized my car had been stolen, I felt unlucky and possibly cursed (the same car had been burglarized a couple months prior).

At the time, I told myself I needed to take more precautions to ensure my personal safety.

Fast-forward more than a decade.

On the way to work several weeks ago, I saw the aftermath of a shooting at the edge of my usually quiet subdivision. It was enough to refuel my desire to be proactive.

I took part in a Women’s Self Defense Seminar hosted by Fishers-based Krav Maga Indy.

On a rainy Saturday afternoon, we crowded inside a hot martial arts studio to learn the basics of self-defense.

Aged 18 to retirement, we took turns hammering our fists into boxing pads and pushing our partners off of us.

Some of us giggled during sparring, feeling slightly embarrassed and hoping this will ready us in case the occasion should arise. Jeff Fredericksen is the Head Instructor of Krav Maga Worldwide of Indianapolis.

“We love the groin,” Instructor Jeff Fredericksen tells us. “It solves a lot of problems.”

The women around me share looks of bewilderment and surprise.

“The eyes are another point to aim for when all else fails,” he continues, putting his hand over his sparring partner’s face.

He goes on to demonstrate how to effectively strike those areas of the body in a myriad of situations.

Fredericksen is an expert—he’s the Head Instructor at the state’s only official Krav Maga Worldwide training center. Fredericksen opened the center in 2008 and has trained law enforcement at the local, state, and federal levels.

1. Awareness: People often fall prey to criminals simply because they’re not paying attention. Fredericksen says always be looking around, especially when you’re alone in a public place like a mall parking lot.

2. Body Language: Stand tall, walk with purpose, and look confident. The less fear you show in your face and body, the less likely you are to become a target.

3. Have An Escape Route: Know where the exits are and how fast you can get to them in your home, school, or office.

4. Tell the Story: Fredericken says, if you do end up in a hostile situation, tell the story. He likened it to bathing a cat. “When you try to put your cat in the tub, it becomes very vocal,” he laughs, but he has a point. Yelling and describing what’s happening to you can be the difference between life or death.

The overarching theme is simple: “get home alive.”

Krav Maga Indy will be having another, more comprehensive self-defense seminar on Oct. 11. 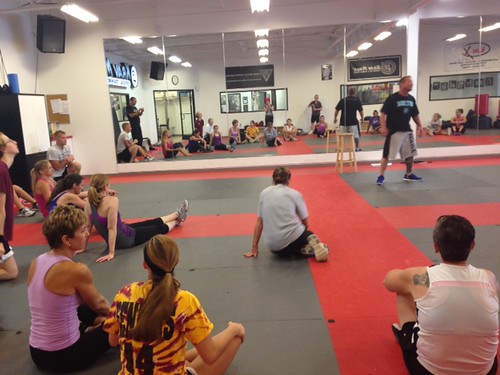