Fighting A Humanitarian Crisis in Nepal

On the afternoon of May 12, 2015, Roger Conn and a team with New Life International (NLI) stood overlooking the once tranquil view of Kathmandu Valley. Conn and the rest of team had arrived the day before as part of the relief efforts that were underway as a result of the devastating April 25 earthquake that paralyzed Nepal.

At 12:51 p.m. NST, Conn and the team were inside of an old church training local villagers on how to operate a water purifier that they had just assembled when the ground began to shake violently beneath them. Conn and company evacuated the building and stood on the mountainous road looking down upon Kathmandu. The once thriving city that had already suffered catastrophic damage was crumbling before his eyes to the ground once more. 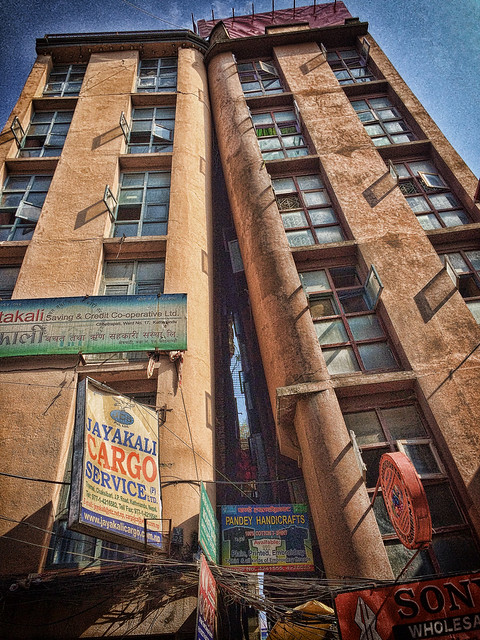 Minutes later, plumes of debris filled the valley below them. “The ground shook beneath us, and it felt as though it would throw us over the cliff,” Conn recalled. The aftershock measured a moment magnitude (the measurement used to record the size and energy of earthquakes) of 7.3. The epicenter was between the capital of Kathmandu and Mt. Everest.

In addition to the scores of people killed and injured from the first earthquake, an additional 200 people were killed and 2,500 were injured in the countries affected by this major aftershock.

The 7.8 magnitude earthquake and the subsequent aftershocks are the worst natural disasters to strike Nepal in almost a century.

Roger Conn and his teammates survived the 7.3 aftershock, and he shared his incredible tale of survival and perseverance upon his return home.

Conn, a former Carmel Police Chief, and his family are longtime Carmel residents and active members of Northview Church. Conn is also a member of the Rotary Club of Carmel.

“The morning of the first earthquake in Nepal, I made a call to the people at NLI,” Conn said. “They were trying to find a way to get into Nepal as quickly as possible and bring in the water purification systems that they invented in Underwood, Indiana.”

New Life International, Inc. is a 501©(3) Christian outreach organization dedicated to humanitarian and developmental activities. One of the largest outreach programs of NLI is to provide safe water to the world. To meet the world water crisis, a simple water purifier was invented, developed and patented at NLI.

Inventor Duvon McGuire experienced a close brush with death when he contracted Giardia from contaminated water while on a mission trip in Ecuador with his family at a young age. This experience led Duvon McGuire to study parasitology and graduate with a degree from Asbury College in pre-med and chemistry.

Before his senior year, he spent the summer working in hospitals in India. There he witnessed the devastating effects of poor sanitation and pathogen-infested water. After years of research and experimentation, he invented an affordable, lightweight, portable water purifier that could disinfect large quantities of water efficiently and quickly for entire communities. 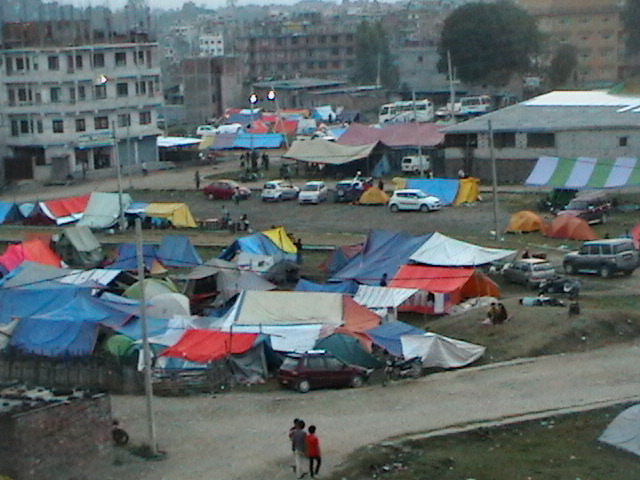 He received a patent for this invention. The New Life purifiers have been taken or sent to over 75 countries where natural and man-made disasters have plagued the areas.

Through acts of fate, Conn was introduced to McGuire and the people at NLI and worked with them in the aftermath of the earthquake that devastated Haiti in 2010. Upon learning about the extent of damage in Nepal, he knew that he and his friends from NLI had to go to Nepal. The first team arrived within four days of the first earthquake to assess the needs.

“I was in the second team, and we brought with us an additional nine water purifier units,” Conn recalled. “The first team brought in six with them. We have to find water sources once we arrive and locate the best locations to install the units.”

Through contacts with Christian organizations within Nepal, NLI was able to organize a “home base” at the Nepali Christian School that was located in the epicenter of the damage. There, Conn and his teammates, Steven Uhde, from Underwood, IN, Jess Sandlin from Lexington, KY, and Steven Lacroix, Underwood, IN, would establish their camp for 13 days. Their basecamp was located next to the Kathmandu International Airport for the purpose of an expedient evacuation. Stationed near Conn and his team were the U.S. military relief teams. It was there that Conn and his team consoled members of the U.S. Marines who lost six of their own who died in a helicopter crash while supporting earthquake relief efforts in Nepal. Conn described the sights that they saw and the conversations that they had to those that would be spoken on a battle field and see throughout war-torn country.

Countries including the U.S., Russia, Germany, India and Great Britain had already dispatched humanitarian relief and military forces to assist in rescue and recovery.

“Germany sent two water purifiers that were able to clean 10,000 liters an hour,” Conn explained. “The water purifiers that we are installing purify a 500-gallon tank of water in an hour. Each one of these units can potentially serve a small village of 150-200 people and up to a couple thousand people a day.

“Once we find a good source of sustainable water that we can purify, we bring the 500-gallon tank, an automobile battery and a solar powered recharging unit if there is no electricity and the unit itself. We then teach the local people how to assemble and operate it. We had an interpreter in Nepal and had the local people assemble the units as we explained the operations.

The simplicity of this system is that it uses the water that is provided and rock salt. We pour about 2 tablespoons of salt into the water chamber, and once the pump starts circulating, it electrifies it in an electrolysis type system and then causes a chlorine gas reaction that pumps into the water tank and kills all of the harmful bacteria. The price per unit is only $2,600.

“When the Nepali people realized that we were bringing these units in to help, they were immediately anxious for us to get started. Everyone had a story of family members in need of food, shelter and clean water. We evaluated sites and looked for schools, churches and orphanages where people can gather and feel safe to go for help. We met a Nepalese doctor and her electrical engineer husband that assisted us in getting the water tested, following the treatment to show the local people that the water was safe for consumption. 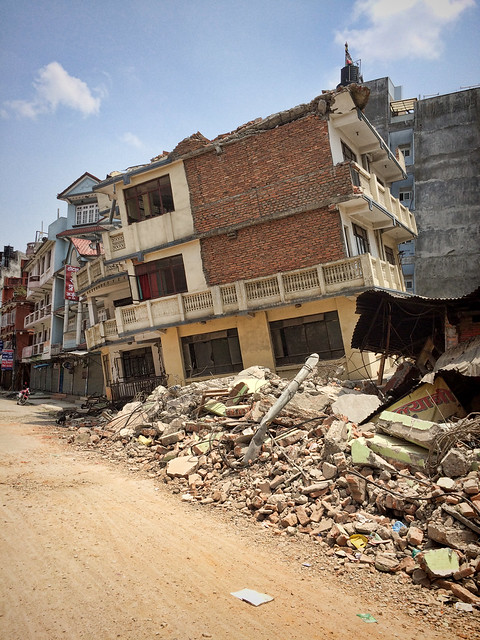 “I was extremely impressed with the resilience of the people, though the children and the elderly were obviously suffering from post-traumatic stress. However, the outstanding resolve of the people was that they were not going to wait for the government or the world to come in and help, but they were going to start working to rebuild and save the crops that had not been damaged before the monsoon season begins in late June.”

“Of the 614,777 buildings in the Kathmandu Valley, more than 51,000 were destroyed and an additional 42,000 badly damaged,” Conn stated. “The second earthquake and subsequent aftershocks destroyed another 115 buildings in Kathmandu. Across the nation of Nepal, an estimated 500,000 buildings have been destroyed, and over 8,500 believed dead and 16,500 injured.”

Conn’s photographs of the scene depict the immeasurable amount of damage to structures, homes, iconic temples and of course the human suffering as a result of the devastation. He captured images of older children consoling the younger children along the streets and mountainsides. The graphic images of collapsed buildings that once stood 4-6 stories tall that are reduced to only 2-stories with the bodies of the victims still trapped inside, unable to be recovered until the Nepali people demolish the buildings.

Throughout the duration of their stay, Conn and his teammates experienced as many as six to eight tremors a day that would vary in magnitude. Due to the inherent danger of the tremors and threat of additional major aftershocks, most of the people have created “tent-cities” throughout the Nepal.

After the May 12 incident, Conn notified his family that he had survived and that their mission continued. Among themselves, Conn and his teammates agreed that God had put them there to help the Nepali people and that they would complete their mission.

“The people of Nepal are hardworking and resilient, but they need our help now,” Conn implored. “Nepal has not seen an earthquake of this size and devastation for more than 85 years. With modern advances in technology, we can help keep cholera and typhoid at bay.

“While we were in country, we carried first aid kits, rain gear and additional water, and we kept our cell phones charged. We often slept in tents if it was not safe to sleep indoors. We would sleep fully dressed, backpacks ready and prepared to make a hasty escape. Our passports were in our pockets at all times, so that if anything happened, we would be identified. There were at least four nights that we jumped up and ran out to the streets in the middle of the night as a result of a strong aftershock.”

There are currently 47 NLI water purifiers operating in country. Another one of their teams is heading over with at least 20 more. NLI has provided jobs to Nepali men where they are earning a living by installing these water purifiers and teaching other locals how to install and operate the units. There is an urgent need in Nepal for another 1,000 units. 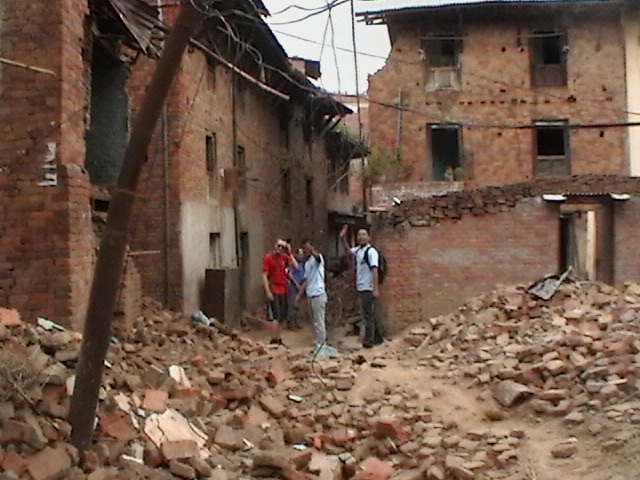 While continuing his efforts to assist Nepal, Conn will be heading back to Haiti in the near future to areas still devastated by their earthquake to implement the training and installation model that they developed in the two weeks spent in Nepal. Conn’s home church, Northview, is going to help that Haiti mission, so that Conn can get clean water into the areas with active cholera cases.

Like Haiti, Nepal will take over a decade to rebuild. The recovery operations have not yet penetrated into the mountain regions due to the roads being destroyed and entire mountainsides that have come down burying the villages. The death toll is close to 9,000 and will likely grow, as they are able to reach the mountain villages.

Conn shared the intimate emotions that he felt when the plane landed and his feet stepped upon American soil. “When we landed, I just wanted to hug my wife and kids. But I will most likely return. There is still work to be done and more purifiers to be installed.”

For more information and to donate to New Life International, visit waterfortheworld.com or contact them at 812-752-7474.