Carmel’s own Eric Dick has gone from scampering around the Carmel Dad’s Club soccer fields to dominating the collegiate fields at Butler University and finds himself today on a major league field at Sporting Kansas City. Dick made national news when he was selected as the 2018 Major League Soccer’s (MLS) 13th First-Round Draft pick earlier this year, the highest pick this season of a BIG EAST player.

The MLS, founded in 1993 and headquartered in NYC, is a men’s premier professional national soccer league sanctioned by U.S. Soccer. The league is comprised of 23 teams, 20 in the U.S. and 3 in Canada. The regular season runs from March to October.

Prior to being drafted by Sporting Kansas City, Dick’s other recent accomplishments include being named 2017 United Soccer Coaches First Team All-American, 2017 BIG EAST Goalkeeper of the Year and most recently BIG EAST Male Scholar-Athlete of the Year. 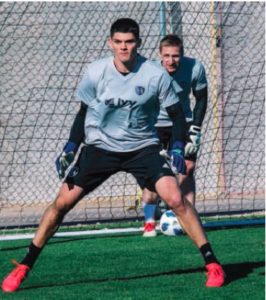 Dick’s path to being a first-round draft pick for MLS began in Carmel where he grew up playing soccer with his sisters and friends at the Carmel Dad’s Club and for Carmel Community Schools. Dick’s family moved from Roeland Park, a part of the Kansas City metropolitan area, to Carmel when he was 5.

“I was involved in all kinds of stuff growing up,” Dick said. “I played in [Carmel] Dad’s Club soccer. Our team made the championship four years in a row, and we lost all four of those. I never won a Dad’s Club soccer championship, but I loved it. I played basketball and was involved in our neighborhood swim team. I also played Carmel Dad’s Club baseball, but as I got older, it’s been basketball and soccer my entire life. Once I got to high school, I really focused mainly on soccer.”

As a freshman at Carmel High School, Dick said he went into his freshman year not really expecting much of his developing soccer career.

“I went into trials and was the only freshman goalie who tried out,” Dick said. “They put me on the freshmen team. We had such a great team and had a lot of fun. I tried to make the most out of that experience and make every practice count. I would go out and work for hours. I would bike up to the Carmel Dad’s Club building and kick balls against the brick wall on the side of the building for hours, working on accuracy and doing ladder work and agility stuff. I put in hours and hours of work, and I had lots of help and support. I just took one day at a time, and I was lucky enough to get a varsity spot and played there [Carmel High School] for two years.”

Dick played at the Indiana Fire Academy in the Development Academy League his senior year at CHS.

“My senior year with the Academy was when I began thinking that I could do this in college,” Dick said. “I embraced the position [goalie], but one thing that’s always stuck with me is my humility. I kept that throughout high school and college. I know that I always have a lot to improve on.”

Dick graduated from CHS in 2013 and decided upon attending and playing at Butler University.

“I reached out to a bunch of schools and had planned to go to summer camps,” Dick said. “Being in the Academy system, it allowed for some of the schools to see me play. The Academy’s goalie coach Mike Sanich trained me in the Academy system, and he was the goalie coach at Butler [University] at that time. I honestly wasn’t considering Butler, and then once I started training with Mike, I realized that I really liked him. I hadn’t had a goalie coach that I was really passionate about before.

“He made sure that I considered Butler, so I talked to their coaches and went to their winter camp, and it just set off from there. They [Butler University] had just joined the BIG EAST, which is a great conference, and all of the coaches had international and MLS connections. Of course, Mike was there, so it was an easy decision. I went with my gut and knew that I felt very comfortable with that coaching staff. And it [Butler] was close to home, so my family could come and see the games.”

Dick emphasized that throughout his high school and college career, there have been many friends and family supporting him. “I owe so many people so much,” he said. “I truly believe that the awards earned were a team effort and are team awards. Part of my team was not only the Butler team but my family. They’ve been the most supportive, the most sacrificing people I know. The countless hours of taking me to soccer trainings and sitting in their cars waiting for my practices to be done. I had friends that would drop everything and practice with me, and that may not have been the most fun for them. I am very lucky to have this many people in my life that have helped me get where I am today. I owe them everything.”

Dick’s senior year at Butler earned him national recognition. He led the 2017 Bulldogs to a 14-5-2 overall record, a BIG EAST regular season championship, and an appearance in the NCAA Third Round. That postseason run matched the best finish in program history. The 6-5 goalkeeper earned first-team NCAA Division I All-America accolades as well as being named the BIG EAST Goalkeeper of the Year. The All-BIG EAST First Team honoree had a BIG EAST-best nine shutouts on the season, posting a 0.97 goals against average and .820 save percentage. Dick’s nine shutouts were the most in a single season while his 28 career clean sheets are also a Butler best. In 2016, Dick helped Butler to a BIG EAST Tournament championship title and was named the BIG EAST Championship Most Outstanding Defensive Player.

Dick graduated from Butler, majoring in Science, Technology and Society and minoring in Business and Spanish. His dreams of “going pro” in the MLS were about to be realized.

Dick recalled the day of the 2018 MLS SuperDraft as being a “whirlwind of events.”

“It started with my parents and me flying from Indy to Baltimore,” he said. “The morning of the draft, our flight got delayed, so we drove from Baltimore to Philly, and I was changing into my suit in the car. We weren’t even sure if we were going to get there. My head coach Paul Snape was already there, and he called us saying, ‘We’re here, and it [the draft] has started. My dad dropped us off, and my mom and I went into the convention center. We totally missed the right entrance, and when we finally found it, they wouldn’t let us in the room because they were at max capacity. I frantically told them that I was one of the players. We were finally allowed in just as they were announcing the sixth pick. At that point, we were just trying to find my agent, my coach and a place to sit.” 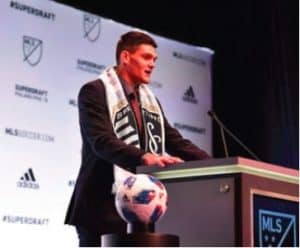 Dick recalled he and his parents finally met up with Coach Snape. The group had just begun talking when Dick’s agent suddenly grabbed him and whisked Dick away from his entourage, proclaiming that “he was up.”

“The next thing I hear was, ‘For the 13th pick of the MLS Draft for Sporting Kansas City … Eric Dick.’ I literally blacked out walking to the stage. I really don’t know what I said to be honest. When I saw it played back, I was a little impressed because I managed to put in some solid words.”

Dick said the rest of that weekend was a chaotic blur of returning home to Carmel, only to pack and report to his new team that following Monday.

“I’m still sort of blown away,” Dick said. “It was a dream come true, and I was elated. I was born in Roeland Park near Kansas City, so it’s like a full circle thing, and the fact that I’m coming back to where I was born to play soccer is pretty cool.”

Dick concluded, “Right now, I’m embracing it [the experience],” he said. “The college experience for me, every year, was a step for me, not only physically developing my skills, but also mentally. I’d say that’s the biggest area that I’m changed in over my four years in college, the mental aspect of being a professional on and off the field and also handling the goalkeeper position through all the highs and lows. It’s about staying positive and being positive. My goal is to inspire others. I knew coming in that I wanted to take it day by day and get a little better every day. It’s a process on a whole other level. It’s going to take time to get acclimated to this system, but I’m soaking it all in. I’m here because I know I can be here, and I want to show them [my team] that they’ve made a good investment and repay their faith in me. I try to do that every single day. I’m enjoying it every single practice.”

2017: Started in 20 matches … Totaled 1864:33 minutes of play this season … Had a total of nine shutouts, including the match against Lipscomb in the first round of the NCAA Tournament … Recorded a goals against average of 0.97 and a save percentage of 0.82 … Made 91 saves and allowed 20 goals on the season.

2015: Second Team All-BIG EAST … started all 18 matches, leading the Bulldogs to a 10-4-4 record and third-place finish in the BIG EAST … BIG EAST Goalkeeper of the Week for Nov. 9 after three saves against #25 Xavier on Senior Night … twice made the BIG EAST’s five-player Weekly Honor Roll … posted an 0.90 goals against average and seven shutouts … finished the season with 70 saves and a save percentage of .805 … ranked among the BIG EAST leaders in all goalkeeper statistical categories: second in saves (3.89 per game), third in save percentage (.805) and shutouts (seven), and fourth in GAA (0.90) … had 12 saves in the team’s Oct. 10 game at Georgetown, the highest total in the BIG EAST in 2015 … five of his shutouts came in Butler’s nine BIG EAST matches, as his GAA improved to 0.56, second in the BIG EAST.

2014: Played in 13 matches, including 12 as a starter … ranked fifth in the BIG EAST with a 0.81 goals against average … finished fourth in the conference in save percentage (.804) and fifth in saves per game (3.46) … recorded five shutouts and had one shared shutout … named BIG EAST Goalkeeper of the Week twice and earned a spot on the conference Weekly Honor Roll once … had a career-high seven saves in a 1-0 shutout of #7 Marquette and in a 1-1 tie against SIU-Edwardsville … had five saves in a 2-0 combined shutout of #11 Providence … finished with a 4-5-4 record.

PRIOR TO BUTLER: In high school, Dick was a three-time Scholar-Athlete Award recipient, member of National Honor Society and Student Government class representative. On the field, he was a two-time All-District and All-County selection. In 2011, he was named to the Indianapolis Star Super Team and was the County Player of the Year.