On and off of the field, members of the Colts are contributing to the Indiana community in meaningful ways, leaving a long-lasting impression on the local youth.

DREAM Alive, founded by Tarik and Maya Glenn, is an Indianapolis-based 501©(3) that exists to equip urban youth in grades 7-12 to become civic-minded leaders. They do this by providing their scholars with three key opportunities: mentoring relationships, character development and experiential learning. The end product is a group of young men and women of integrity and character who are confident, skilled and willing to serve their community.

Dwayne Allen, Player Executive for DREAM Alive, has stepped into a leadership role within the organization to assist with Glenn’s mission. Allen, tight end for the Indianapolis Colts, is making an impact in the lives of Indianapolis at-risk youth. 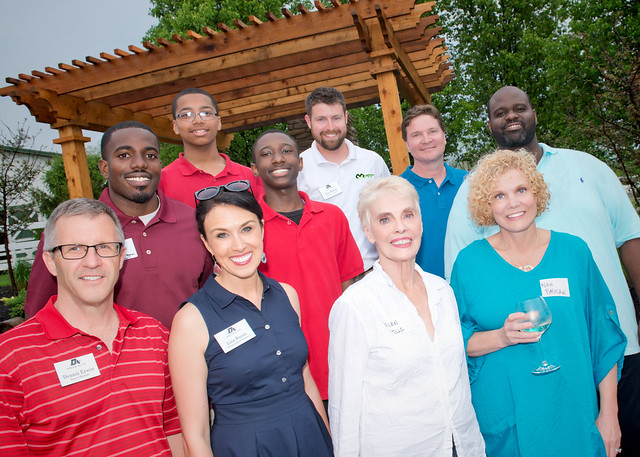 Glenn, like Allen, used his celebrity as a former member of the Indianapolis Colts to influence and mentor the next generation of leaders. Glenn officially became president of DREAM Alive in late 2011 and works tirelessly for DREAM Alive to provide hands-on leadership.

“My wife, Maya, and I utilized the platform that I had while I played for the Colts to create DREAM Alive,” Glenn explained. “One of the things that inspired us was that we wanted to give back to the inner-city communities and create something where we could give back together.

Support from the local businesses is essential in sustaining organizations like DREAM Alive.

Bill and Nancy Bastian, along with Helen Wells, hosted a kick-off event for Dwayne Allen’s DREAM league and announced that the league will feature a season-long competition with unique access to benefits for members that will lead up to their fundraiser, the annual Wishing on Stars benefit on Monday, September 14, 2015 at Sullivan’s Steakhouse in Indianapolis. An annual event since 2004, Wishing on Stars was first hosted by former Indianapolis Colts Tight End Marcus Pollard.  Fellow Colts players, Indiana Pacers, Indy 500 drivers, and other local celebrities are expected to attend the event benefitting DREAM Alive. DREAM Alive and members of its staff used the kick-off as a platform to announce their goals and introduce guests of the event to a few of their scholars who spoke about the opportunities and positive mentoring they have been exposed to as participants of the programs offered through Dream Alive.

“We’ve enjoyed working with DREAM Alive and the scholars for several years now,” said Bastian, CEO of Bastian Solutions. “We are an engineering firm, so we will have them learn about 3-D CAD, lasers, robotics, conveyors, etc. It is fun for the kids, and they get to learn new about new things and interact with our engineers who enjoy mentoring the kids. Rick Conner with American Structurepoint has had the scholars at his company to learn about architectural and civil engineering where they learn about building bridges, etc. There is a lot that we can do to engage and impact these youth. These kids are energetic and fun. It is about dreaming, learning and motivating them to keep their dreams alive.”

The DREAM Alive organization also recognizes the importance of having positive mentors on board to work with and help raise up their scholars.

Henoc Muamba, Indianapolis Colts linebacker and DREAM Alive advocate, spoke about what his involvement means to him. “It is programs like these provided by DREAM Alive that builds and creates the foundation for the communities’ children who are the future,” Muamba emphasized. “Programs like these build a foundation for kids that may not have been taught the values that each individual would need to grow and become the men and women that they were meant and created to become.