Kimball believes that those incidents are trending downward due to the combination of awareness efforts and the fact that bicycling is becoming more a part of the city’s culture. With 183.7 miles of multi-use pathways, the connectivity and ease of commuting by bike just keeps improving. He says the city is improving west Carmel and installing multi-use paths to better interconnect the city’s neighborhoods. They will make it easier to make connections to major pathways like the one from 106th in Zionsville to the White River and the east border of Carmel.

Kimball recently announced the addition of some new bicycle-related events as well as the return of some popular ones. “Some of the things 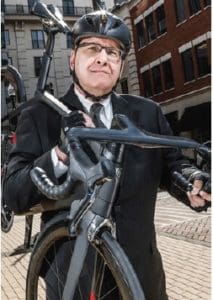 that we have planned for this year are three different rides, Safe Summer Cycling that we will be doing this summer to promote bicycle safety and awareness, especially during the summer months when the kids are out of school,” Kimball shared.

The “Ride, Dine, and Dance” event will be held on July 1st. “We will start the ride at 6:30 p.m., and it is intended to be a 25-mile ride, depending upon the participant’s level of fitness and then ride back to the Arts and Design District where there will be a band and street dance. Sun King is going to be one of our sponsors and the band will play until midnight. We hope that this eventually becomes one of the major rides in central Indiana,” he said.

The dine and dance portion of the event will be open to everyone whether or not they participate in the ride. Kimball says that a portion of the proceeds will be used to sponsor more bicycle and safety events and another portion will benefit the Freewheelin’ organization, a nonprofit that uses bicycles to teach life skills, good health and leadership habits to children. “Children are able to earn a bike and learn basic bike mechanic skills and work with a mentor,” said Kimball.

“Pack a Sack” will be the theme of a 10-mile ride geared towards families and children shortly before school starts. “The participants will stop at four or five different places and pick up healthy foods to make up a sack lunch and learn about nutrition,” he said.

Kimball said the “Ride a Bike-Borrow a Chair” program will return. “It’s designed to encourage biking to events such as the Gazebo concerts on Wednesday evenings, Jazz on the Monon concerts, and the festivals that go on in downtown Carmel. There will be bicycle corrals at the major festivals, and that may include the annual Greek Festival. The idea is that people who live farther away could park a mile or two from the event and then bike to the event and have a place to park their bikes.”

He is also working on “Helmet Thursdays” that he hopes to launch in May. This program will work with local restaurants so that bicyclists with their helmets who go to a participating restaurant will receive a discount. Kimball hopes this will develop into a county-wide initiative. 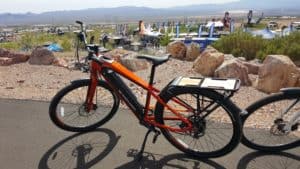 Kimball has already ordered his new “Ebike” or electronic bike. “We’re getting ready to see these bikes hit the local markets,” Kimball said. “There are pedal models that you have to pedal, but once you reach a certain resistance, the motor kicks in and assists the cyclist. They are ideal for commuters because you can go along at a good stride and not break a sweat. You won’t have to re-dress upon reaching the office. They’re already big in Europe and Asia and they will soon be coming to Carmel and the local areas. I can’t wait until mine arrives. I will be riding to my council meetings and other engagements where I need to wear a suit and tie. Though, I won’t be giving up my regular bicycle anytime soon.”

Carmel resident Lee Ann McKey, owner of e-Boom Bikes in Zionsville, said that there are two types of eBikes. One is available with a throttle and one operates with pedals. “There are many different styles of these bikes,” McKey said. “There are different types of wattage. The lowest available is 250 watts up to 750 watts. There are governors installed on the eBikes in the U.S. and so the maximum speed is 20 mph. A starting price for these bikes is $1,500, $2,500 for a median, and they can go up to $10,000 for the serious commuter.” She said that ebikes don’t need any regular maintenance. “You just need to charge the battery when it is low. Most eBikes can go about 40 miles before recharging the battery,” she says.

For more information about the upcoming bicycle rides in Carmel visit: www.carmel.in.gov