“The Gala raised just under $60,000 its inaugural year, and a little more than 300 people attended,” Lentz said. “We exceeded our expectations as far as the amount that was raised. The proceeds were used to support the Carmel Summer Lunch Program that fed 135 youth in Carmel who received breakfast and lunch for the five days that they would normally receive a meal at school. The program ran for all 11 weeks of summer. The cost to feed each youth was $1.30 per child per day. One in seven youth in Hamilton County is considered food insecure. This program and the donations given at the Gala definitely make a difference to those youth and their families.” 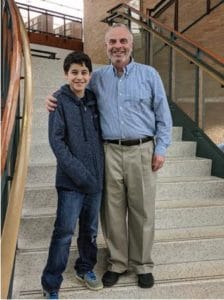 The Carmel Gala is the primary fundraiser for all of CYAP’s programs and services. Maggie Figge, early intervention advocate at CYAP, introduced us to CYAP mentee Ali Mohamed, his mother Deena Fahim and his mentor Mitch Appelsies, a Carmel resident. Figge emphasized the importance of CYAP’s mentoring programs and how it has helped Carmel youth like Mohamed.

“One of our goals with mentoring for Ali was to give him something to look forward to and someone that was going to invest in him and make him feel good,” Figge said. “Ali’s had a lot of big transitions in his life. For a sixth grade kid, he’s had a lot to deal with.”

Appelsies has raised three daughters of his own and was looking for something that would allow him to “pay it forward.” His daughters had read about CYAP and introduced the program to Appelsies who then contacted Figge.

“I’ve always had an affinity for kids,” Appelsies said. “I started the process with Maggie and decided that it [mentoring] was a good fit for me. Then, I got really lucky and got paired with this guy [Ali] last September, and it’s been awesome.”

Mohamed lives with his mother and two sisters. He enjoys health and gym class and playing the violin in the school orchestra. Mohamed is also an avid video game player and enjoys playing with his mentor, Appelsies, more than with his sisters.

“Ali told me that the reason why he wanted to do the mentor/mentee program was because he has two sisters, and he always wanted an older brother,” Appelsies jested. “Now he’s got a real older brother.”

Mohamed and Appelsies enjoy many activities together and have shared holidays together as extended family. They enjoy everything from a day at Dave and Buster’s and participating in the Carmel Ghosts and Goblins 5K to going to movies and special events and hanging out on the couch and watching movies. They even enjoy working on homework and school projects together.

“It has been fulfilling and rewarding,” Appelsies emphasized. “I feel lucky to have not only Ali but his wonderful family. I’m learning things about his background and culture, and we have fun together. He makes me laugh and smile.”

Mohamed shared what he enjoys about hanging out with Appelsies. “We do things together and go places,” he said. “At home, they [my sisters] don’t really understand video games, and I end up playing on my own. My mom and sisters are always doing makeup and all that kind of stuff.”

Mohamed has also joined the school’s Minecraft and comic book clubs. His mother has noticed a significant difference in her son’s personality and an improvement in his academics since joining the CYAP mentoring program.

“In August, we will have lived here [Carmel] three years,” Fahim said. “He always looks forward to spending time with Mitch. He always asks, ‘When is Mitch coming over?’ I hear that all the time. He’s always excited. It has changed him. He is happier. He was going through a lot of emotions, and it is not as bad anymore. He’s always happy when he spends time with Mitch. And I don’t know what I would have done without Maggie. She’s helped us with so many things.”

Fahim and Appelsies communicate regularly about Mohamed. The relationship has evolved into a friendship and support system for Fahim since she has no other support system locally. Her mother lives in Egypt and visits when she is able, but for the most part, Fahim has grown to trust Appelsies and seeks advice on matters that involve her son and her family.

“Ali is getting exposure to many different things and life lessons,” Appelsies said. “I’m learning a lot from Ali as well, so it’s a win-win.”

Please consider supporting the great work of CYAP and have a wonderful evening by attending the annual Carmel Gala, “Design Bright Futures.”