You are Cordially Invited to a Posh Picnic 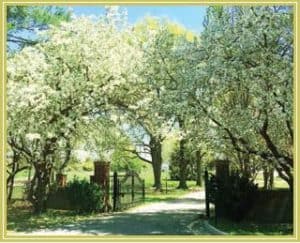 The Guild of Coxhall Estate is pleased to present the inaugural Posh Picnic on Saturday, July 14 at Coxhall Mansion in Carmel. The Posh Picnic will host tables covered in white linens to set the stage for what is guaranteed to be an unforgettable summer evening of elegance and beauty to benefit the Coxhall Gardens Knot Garden, Children’s Garden and Mansion.

The guild is encouraging people to organize a table and create a “theme” for their tables. Centerpieces and added décor are encouraged as each table will be judged on elegance and originality. Prizes will be awarded for POSH Award (most elegant), PEOPLE’S CHOICE Award (voted by Posh Picnickers) and PHUNKIEST Award. Posh picnickers are also encouraged to consider their fanciest picnic apparel or dress in theme with their tables. This event is adult only, but the event coordinators are encouraging adults of all age brackets to come out and enjoy this remarkable event.

Picnickers will need to provide their own dinner service for their tables of 8 to 10: place settings, silverware, napkins and glassware and a side dish to share with the table. Fried chicken will be provided by The Ritz Charles for each table. Alcohol is allowed, and a cash-only bar will be available, offering beer, wine and a signature drink to honor the evening. Picnickers will be delighted by strolling musicians throughout dinner followed by the band, “Free but not Cheap,” for dancing under the stars.

The Guild of Coxhall Estate was established in 2008 by Sharon Terry, a resident of The Village of WestClay and passionate conservationist of the Coxhall Estate. The guild is a subsidiary of the Friends of Hamilton Co. Parks Board and consists of approximately 50 members today. Its mission is to promote social activities in Coxhall Gardens, enhance the overall appearance of the Coxhall Mansion, sponsor activities that raise funds for improvement of the property and provide leadership in educating the public about this historic property.

Coxhall Mansion at Coxhall Gardens was completed in 1974 by Beulah and Jesse Cox. It was donated in 1999 to The Hamilton County Parks and Recreation Department to be developed into a family park and to “preserve an oasis in a sea of homes.” The Governor’s Palace in Williamsburg, Virginia, was their inspiration. The Coxes were very involved with the Parks Dept. in the planning of Coxhall Gardens. Along with the three houses and 125 acres, amenities include The Children’s Garden, the wetlands, a waterfall, two bell towers and a beautifully tiered amphitheater with a bronze statue of Beulah and Jesse.

Joyce Winner, a member of The Guild of Coxhall Estate, explained that the guild has hosted a myriad of fundraisers over the years and is always looking for new ways to introduce people to the Coxhall Estate and Gardens.

“Over the years, there have been a variety of fundraising events for the Coxhall Estate, such as madrigal dinners, fashion shows and tablescapes. And this summer, the guild is presenting the ‘Posh Picnic.’ Additionally, the guild decorates the mansion for Christmas and gives tours during the holiday season,” Winner said. “We are always looking for ways to increase the estate’s exposure and to engage people, all people, of all ages. When the Coxes donated this land, their purpose was to introduce all people to a place of respite and beauty, and the guild is dedicated to continuing their vision.”

Offering some history to the origination of the word “posh,” guild member Nancy Maiers added, “The term ‘posh’ has a history from a long time ago and means, ‘port out, starboard home.’ ‘Posh’ accommodations were the most desirable [cabins] when sailing across the ocean.”

The Coxhall Estate also has a long and rich history in which the Posh Picnic is designed to help preserve.

“The mansion has been preserved as much as possible in its original state,” Maiers said. “I think that it’s wonderful that the mansion can be open for the public to enjoy. The guild’s purpose is not only to raise money for the maintenance of the mansion and its gardens but to also raise awareness of what’s available here, so that people can continue to enjoy the amenities for generations to come.”

The Children’s Garden is truly one of the most unique and interactive gardens in central Indiana. The guild also supports the maintenance of the garden and its many whimsical features that include mock storefronts, bank and jail and a rainbow “ABC” pathway. 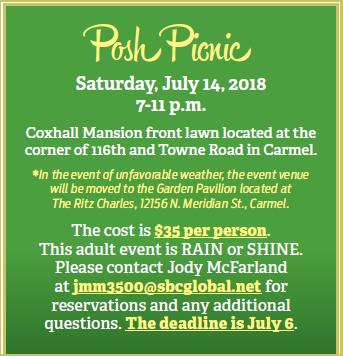 “There is no greater joy than watching the children come to the Children’s Garden,” Robinson said. “It is different from other children’s playgrounds in that it is interactive. For instance, we have an ABC garden and a colorfully painted sidewalk. The children hop on the sidewalk and start reciting their ABCs. It is so much fun to watch. The Children’s Garden creates so much more imagination than other parks.”

On behalf of The Guild of Coxhall Estate, Winner, Maiers and Robinson invite each of you to join in the splendor of the evening on July 14 and reserve a table for what will be an unforgettable evening at the former home of Mr. and Mrs. Jesse Cox.