Concert for A Cause’s October Concert

On October 20, Concert for a Cause (“CFAC”) will hold the final concert for this year with a concert featuring Pat McGee. McGee started his professional music career in 1995 as leader of the Pat McGee Band. The band, dubbed PMB by legions of adoring fans, sold out venues all over the U.S. and shared stages with The Who, Allman Brothers, Fleetwood Mac, James Taylor and the Counting Crows.

McGee released his latest record (his 10th) in 2017 with a legendary group of musicians who helped create the signature sounds of Jackson Browne, James Taylor and so many more iconic artists in the ‘70s. McGee just celebrated the 10th anniversary of Down The Hatch, a four-day music festival he hosts in the Outer Banks, and he continues to tour around the U.S. with a focus on the song supported with strong harmonies and percussive acoustic guitars.

“This final event in 2018 on October 20 will be a perfect way to close out a fantastic year. Pat McGee is one of our favorite artists and favorite people. He loves our mission and being a part of Concerts for a Cause, and he is exceptionally talented and cool too. Our guests are in for a real treat,” said Bruce Kidd, co-Founder of CFAC.

As we have noted in earlier stories, each concert by CFAC is a fundraiser where all the proceeds are contributed to a specific local not-for-profit. The proceeds for this upcoming concert will be donated to School on Wheels. The mission of School on Wheels is to provide one-on-one tutoring and educational advocacy for school-aged children impacted by homelessness. Their vision is to equip these children with the educational tools necessary to achieve success in life and break the cycle of homelessness.

Due to generous support, year to date, Concerts for a Cause has held three sold out concerts, and donations totaling $50,000 were made to Random Acts of Flowers, The Little Wish Foundation and Flight 1. According to Kidd, “This has been a remarkable year of growth for Concerts for a Cause, and we are so thankful to the hundreds of people who have supported our events in 2018 and, by doing so, also supported some very worthy local organizations that are impacting the lives of kids and families in need. This year of concerts has been fantastic with our attendance at each event being double what it was in 2017, and our donations to very worthy not-for-profits are also double what they were just a year 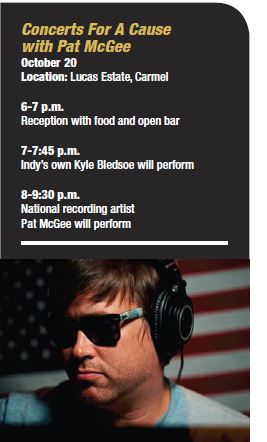 The response from the community has been extremely gratifying for me, Steve Neely and our entire Board. “Our motto from the beginning has been ‘do all the good you can, in all the ways you can, for as many people as you can, for as long as you can,’ and we are so grateful to the hundreds of people who have attended this year’s concert series. Their support is impacting the lives of thousands of kids and families in the community,” said Kidd. “It doesn’t get any better than that.”