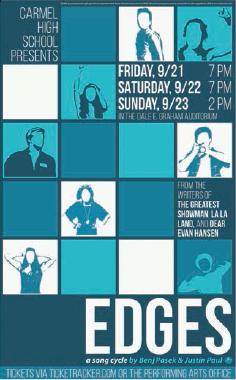 The award-winning Pasek and Paul composed “Edges,” a 70-minute song-cycle, as their first collaborative effort while in college. “Edges” tells the stories of coming-of-age characters attempting to discover themselves. It explores universal subjects such as love, commitment, identity and meaning.

CHS’s production of “Edges” features a company of only eight students, many of whom intend to study musical theater in college or pursue a career in the field. The show will take a minimalist approach, allowing students to create their own stories, stage their own numbers and create their own individual set piece, a chair, that will be their only physical tool in bringing each character to life. Every student will play multiple roles, performing solos, duets and ensemble numbers.

CHS Performing Arts Director Sam Chenoweth is excited to bring “Edges” to the audiences after enjoying a successful first year as the department’s director and a tremendously successful running of “The Little Mermaid” last spring. Chenoweth said that he and the students worked through the challenges of last spring’s production and that they enjoyed doing it differently from the way that the musical is usually done.

“Having made it through year one, I wanted to explore how we can expand the musical theater area here [at CHS],” Chenoweth said. “It’s such a big school, and the challenge is that so many kids that want to go into musical theater beyond high school, but there are also many students who just want to be involved in the productions. I try to find ways to create opportunities, and one way was to add another musical and do one in the fall semester. As I mentioned during ‘The Little Mermaid,’ I like to do things differently from how they are usually done, and with this show, there is no ‘way it’s always done.’ The creative freedom was very appealing to me.”

The audiences can expect a “concert-style” musical with a minimalist approach to staging and costumes. 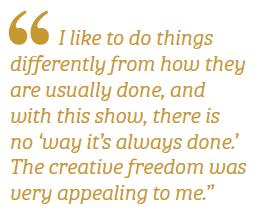 “The minimalism of the show was also appealing to me,” Chenoweth said. “The Pasek and Paul connection is also cool because many of the kids know their other works, and this is the show where the two got started. The kids and I have discussed that many of the numbers don’t have a singular meaning to what they are about. The students have been exploring their numbers in rehearsals and coming back with three or four optional interpretations that we work through and then choose which one makes the most sense. They’re having fun with that process, and overall, it’s just good music. You can tell that Pasek and Paul really enjoyed writing it.” Please follow Chenoweth and the students on Twitter for daily video teasers @carmel_musical.

Tickets are $10 and are available at ticketracker.com or at the CHS Performing Arts Office. For group rates or more information, call Carol Outland at 317-846-7721 ext. 7085. Friday and Saturday performances begin at 7 p.m. and Sunday will begin at 2 p.m. at the Dale E. Graham Auditorium, Door 1, at CHS.