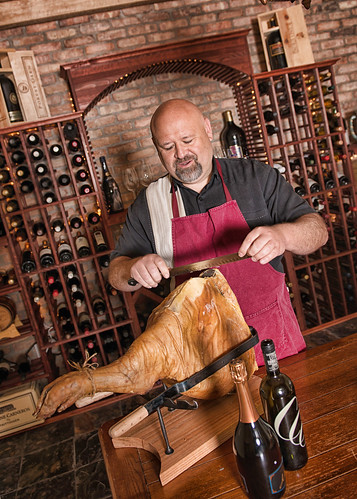 d’s culinary career began when he was just a teenager, washing dishes in the kitchen of a country club in Warsaw, Indiana. After earning degrees from the University of Evansville and the esteemed Culinary Institute of America in New York, Chef Thom returned to Indiana to work at the Chateau Thomas Winery in Plainfield. Today he is the head of the culinary program at Ivy Tech Community College of Central Indiana, with close to 1,500 students following his direction. In addition, he is co-founder of Dig IN, a nonprofit organization that promotes Indiana food and agriculture. To top it off, his edition of The Idiots Guide: Grilling, hit stores across the country and some international locations this month. And he is just getting warmed up!

In 2007, Thom England and Karen Mangia read and embraced a book titled Animal, Vegetable, Miracle. Their eyes were opened to the benefits of eating locally grown foods, especially in a day and age where a significant amount of food contains genetically modified organisms (GMO). Genetically modified foods are altered to perform better in production, and can contain micro-organisms such as bacteria and yeast, insects, plants, fish, and mammals. To reduce or avoid eating GMOs, they set out to know the origins of their food and only eat products from within a 100-mile radius for one year. They called it the 100-Mile Diet.

During this year of discovery, they sought the expertise of their grandparents, who showed them the nuances of canning, freezing, making jam…skills that are rare in today’s world. Thom and Karen then set out to know more about the foods they were consuming and the implications of their choices. And they observed several benefits of their 100 Mile Diet. 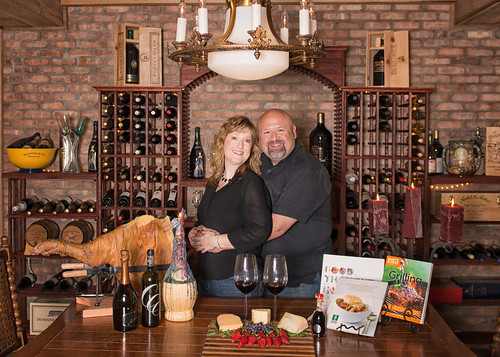 According to Karen, “If we eat local products, the producers are more likely to spend their money locally, which encourages their suppliers to spend locally, as well.” Thom adds, “If each family spent $1.70 per week on local produce, it could expand into $1.5 billion in Indiana revenue.” And likewise, “If we spend our dollars in big-box stores, the revenue goes to their corporate offices far away and Indiana loses out on these dollars.”

There are extensive benefits to our health when we eat local foods. You can often learn what, or if, chemicals were used on the produce before it came to market. Eating foods that are free of pesticides or other potentially harmful chemicals promotes good health.

There is also a social component to eating locally, as people connect and enjoy sharing a good cause. Visit a farmers market and you will probably find kindred spirits who embrace the “know your farmer, know your food” ideal.

Thom and Karen were becoming adept at eating locally when he was asked to be an educator at a Slow Food convention in Italy. Slow Food supports good food and clean products, for a fair wage. It was here that people from all over the world asked Thom what he was doing about GMOs, as he had a key vantage point from the Midwest and middle of the corn belt. They asked him, “Why aren’t you doing something?” (about some of the questionable practices in GMO, such as using cells from salmon to alter corn so that is has a longer shelf life). I had to blink at that one. Yes, some growers really are using fish to enhance corn.

Thom also had the immense pleasure of having lunch with the grand dame of chefs, Alice Waters, who spearheads the local and organic food movement. Waters has been cited as one of the most influential figures in food in the past 50 years, and has been called the mother of American food. Waters believes that eating organic foods, free from herbicides and pesticides, is essential for both taste and the health of the environment and local communities. This meeting solidified Thom’s vision of how to promote organic, locally grown foods. 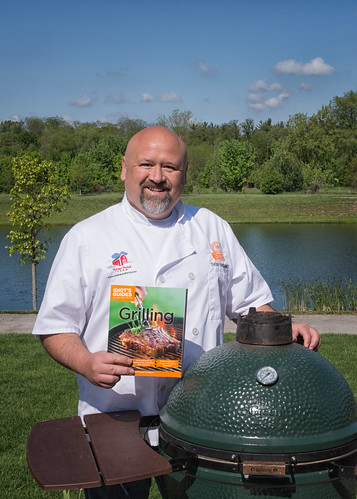 Thom’s most recent accomplishment is to author the new version of The Idiot’s Guide: Grilling. Only the top 10 of all Idiot’s Guides were selected this year for updating and Thom was chosen to author the manual. Talk about a rock star in the grilling world! His vision was to make grilling as simple as possible and something anyone could enjoy. With approximately 100 recipes for meat, poultry, seafood, vegetables, fruits, desserts, sauces, rubs and more, the book is filled with color images to guide you every step of the way. And not only does it list the ingredients, but also the kitchen equipment that will be needed. You can have everything at your fingertips and be ready to go with Thom’s help. With grilling season upon us, it might be fun to add new recipes to your grilling repertoire.

When I asked him to share a recipe that hits it out of the ballpark, he shared a 10 lb. lasagna recipe that literally blew a fireball 10 feet out of his oven. (For the record, you really shouldn’t add so much cheese that it overflows above the top of the pan. And you should place a pan under the lasagna so any cheese melting from the upper pan will be caught and not drip onto the hot coils below.) His friends extinguished the fire, added more cheese, put it back into the oven, and declared it “delicious!”

Ultimately, Thom and all chefs feel the gravity of training the next generation. He says, “The joy comes from training students and passing down the knowledge. All we hope for is our protégés to become self-sufficient and independent leaders. We are not training them for what they can do today, but what they can do tomorrow.”

To begin your own journey to eating organically and locally, become aware of what you are buying. For example, if you have a choice, buy the apple grown right here in Indiana versus one grown out of state. The same applies to supporting a locally owned versus a chain restaurant. You may also join a community supported agriculture group. Simply buy into a share of a local garden, and pick up your produce. There is one at 106th and Keystone Avenue. There are also companies, such as Green Bean Delivery, that offer a year-round home delivery service. And finally, support your local farmers market, which can become the place where “everybody knows your name.”

It’s bound to be a fun summer with the bounty of fresh produce coming your way. Be an informed consumer and support our local producers. Fire up that grill to enjoy the delicious foods of the season. Dig IN and enjoy!

Visit digindiana.org for information about eating locally and visit any bookstore for the Idiots Guide: Grilling by Thomas England.

I credit this recipe with being the catalyst that drove me to finally enroll at the Culinary Institute of America (CIA). I was working as a child behavior specialist in New York City and shared an apartment with my supervisor, Brian, with whom I had talked many times about my desire to go to the CIA. One night I was making this lasagna—maybe not following proper techniques as well as I should have—and, loving sausage, I doubled the amount. The extra sausage caused oil in the pan to overflow. When I opened the oven door after baking, a fireball shot across the kitchen. This is the only time I have ever had to use a fire extinguisher. Brian looked at me and said, “It is time for you to go to the CIA.” A week later, I was in class. This is a safer variation of the original Fireball Lasagna.

1. Preheat the oven to 350 degrees. In a large pan over medium-high heat, brown the sausage along with the onion and green pepper. Drain off the excess oil.
2. To the pan, add the ricotta cheese, diced tomatoes and tomato sauce and turn off the flame. Mix well.
3. Place a small amount of the mixture in the bottom of a 9-inch by 13-inch pan. Next, place a layer of the raw noodles. Sprinkle on the cheddar cheese. Spread 1/3 of the ricotta/tomato sauce evenly in the pan. Add the next layer of raw pasta noodles. Sprinkle on the Monterey Jack cheese. Layer on the pepperoni and then another 1/3 of sauce. Add another layer of noodles, the remaining sauce and top with the mozzarella.
4. Cover the dish aluminum foil. Place it in the 350-degree oven for 45 minutes.
5. Take out of the oven and remove the foil. Sprinkle the Parmesan on top of the lasagna and return the dish to the oven. Turn the oven to broil and brown the cheese.
6. Remove from the oven and allow the lasagna to rest for 20 minutes.
7. Cut it into 15 pieces. Top with a small amount of tomato sauce.