Celebrating 20 Years of Fresh in Carmel

What began as merely a suggestion more than 20 years ago has become significantly more than just an annual event. The Carmel Farmers Market is a beloved tradition that best represents the ideals – live, work and play – in the heart of Carmel.

The Carmel Farmers Market is produced and managed by “community-minded” volunteers and is headed up by an equally dedicated leadership team led by the market’s president, Ron Carter, and vice president, Deborah Schmitz.

We sat down with Carter and Schmitz to reflect back over the last two decades and recall the genesis of the market.

The market formally organized and opened its first season in May 1998. Carter, who had been elected to city council in 1996, had received a telephone call from a local resident and journalist who worked for the IndyStar. She had charged Carter with the task of starting a farmers market and pledged to write an article calling for volunteers to assist with the efforts. Carter, who had no previous knowledge of starting, let alone running, a farmers market was going to embark on a journey that would result in managing one the largest farmers markets in the Midwest. 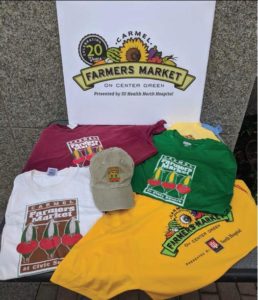 “The reporter said she’d write an article, and so she did,” Carter recalled. “The article was about the need for volunteers to start a farmers market in Carmel. Consequently, we got six people to show up for an organizational meeting. Among those six people was Jim Keckly. Keckly was a retired banker whose wife had passed away, and he thought it would be kind of fun. Fast forward, we have another meeting, and admittedly, none of us know anything about starting a farmers market. It was the pre-website era, so I cast around for some resources and made some calls. I called Purdue University, and they referred me to a professor at Michigan State who had written a book just so happened [to be] titled, “How to Start a Farmers Market.”

Carter said the book was available as a three-ring binder and was available for $15 per copy. He went to Mayor Brainard and asked if the city could spare $115 to get 10 copies of this book.

“He [the mayor] was very supportive,” Carter said. “We each read the book and said, ‘We can do this.’ The meeting after that, we got organized and asked which of us was going to be the chairperson. It was one of those typical meetings where no one really stepped forward, and there was that awkward silence. Finally, Jim Keckly said, ‘I guess I could do it.’ We were extremely fortunate, and it really was a godsend that he agreed. Jim had mentioned in the first meeting that he had been in the banking business. He started out at the old Fletcher Trust Company and retired 44 years later as the executive vice president of Bank One. We really didn’t know what we were getting in the way of this excellent executive and outstanding volunteer.”

Carter continued, “He really got us off and running and was a really great first president of this market. Every Saturday, he would be the first one there. It didn’t matter how hot or cool it was. He was there, and he always had a dozen donuts for his committee. That’s why we have ‘Jim Keckly Donut Day’ to open the market each year so as to honor his memory.”

“We modeled our structure by what a market in Minneapolis, Minnesota, does,” Carter explained. “That market has a ‘friends’ group and an operating market group. The Carmel Farmers Market is an Indiana not-for-profit corporation. We have a second corporation called the Friends of Carmel Farmers Market, which is a 501(c)(4). As I say, the City has always been supportive, but we don’t take any dollars from the City. They help us in other ways. One of those ways was to make sure that when the Center Green was being built, we were able to get that designed, so that the area would accommodate the market and other events that might possibly take place there. We have one of the finest market venues of any in the country.”

The Volunteers and Vendors

Upon the completion of the Center Green, the Carmel Farmers Market was eager to call the venue its home. Each vendor space has electricity, and the venue allows for ample configuration of vendor spaces.

While a market can’t function without quality vendors, the volunteers are the heart and soul. Carter and Schmitz spoke about how valuable the market’s volunteer core is to the success of the market.

“The market couldn’t happen without its group of really dedicated volunteers,” Carter emphasized. “We [the volunteers] have fun together and do things socially outside of the market. We have a herd of amazing volunteers who work very hard to make sure the market runs.”

Schmitz added, “You have to put your heart into it. We as volunteers put our hearts into it every Saturday.”

The market will have 67 vendors this season, some of whom have been a part of the market since its inception. “We’ve been very loyal to our vendors,” Carter said. “We expect our vendors to be with us every Saturday, so that our guests can expect to see the same vendors every week.”

“We have a vendor relations committee that is headed up by Deborah [Schmitz],” Carter stressed. “We pay their mileage expenses to travel around the state and visit our vendors to make sure that what they are planting or producing is what they will be selling at the market. That’s one of the volunteer benefits – there are some really good meals that come out of these visits sometimes.”

Schmitz added, “Our vendors enjoy it [the visit] so much, and they often ask us, ‘When are you going to come back out again?’ They are excited to show us how they’ve grown.”

“I’ve always said it’s the most expensive committee that I’ve ever worked on,” Carter jested. “The reason is that you’re there almost every Saturday morning from 6 a.m. to 12:30 p.m. if you work a full shift, and you’re exposed to all of this wonderful food and product.” 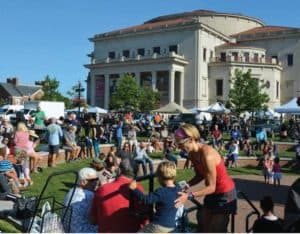 “It’s a self-fulfilling prophecy that more and more people have moved to Carmel for the amenities that we have, and the amenities have matured and grown along with the population of the city,” Carter observed. “We try to do the best job with the market and provide a really good value and experience for the people coming to the market, not only from the food standpoint but from a fun standpoint with the music, the venue and the volunteers.”

The market is one of the city’s major attractions and social events throughout the season, attracting an average of 4,000 people during its hours of operation each Saturday. Many market-goers bike to the market as well. The venue’s designated bicycle parking has made cyclists feel like a welcomed addition to the market crowd.

Many “special events” take place each month throughout the market season, including the Firehouse Cook-off where Carmel Fire Department’s six stations compete in a cook-off against one another for the winning title and bragging rights. The Carmel Police Department hosts a day advocating and recruiting for its Citizens Academy. The market’s title sponsor, IU Health, hosts a health screening day, and Purdue University, a silver sponsor, has “Purdue Day” at the market.

New this year on May 19, the market will host the “Big Green Egg Fest” presented by O’Malia’s Living from 10 a.m. to 3 p.m. Local chefs and grilling enthusiasts will exhibit their Big Green Egg expertise.

“This [the market] is a quintessential third place,” Carter concluded. “We’ve lost so many third places throughout our country. In eastern seaboard cities, third places were the local neighborhood taverns where everybody was equal, and people could sit down and talk. Everyone’s opinion was valued, and it was a place of social gathering. We don’t have many of those for the most part anymore, but this [the market] we do have, and it is a big third place.”

For more information on the market, including hours, special events and other market-related news, visit Carmelfarmersmarket.com. Please note: there is ample FREE parking at both the Booth Tarkington Civic Theatre Garage and Veterans Way Garage. Both are in close proximity to the market.