Throughout history, music prodigies have lived all over the world. What defines a child prodigy is a child under the age of 12 who displays a talent in music that surpasses the skill set of their peers and is competitive with skilled adult musicians. Carmel’s own Ashton Gleckman joins an illustrious list of child prodigies, and his story begins when he was only 6 years old.

Gleckman began his musical career when most children are mastering the basics in kindergarten. His first love was playing the guitar. He is proficient in guitar, drums, and piano. As a youth, Gleckman performed gigs with three different bands and was expertly playing the music of rock legends like Stevie Ray Vaughan and Eric Clapton.

But becoming the next great guitar hero was not in the stars for Gleckman. He had a different vision and a growing passion for something more. His devoted parents, Ari and Jennifer, have stood behind their son’s passions and decisions, even when it meant selling off the prized guitars to invest in Gleckman’s production software and equipment. Gleckman had realized his destiny, and it has been unfolding before him over the last few years. Now, at the ambitious age of 16, Gleckman is a bona fide composer, filmmaker and a genuinely kind-hearted soul who is wise beyond his years.

An articulate conversationalist, Gleckman hosts a livestream series, “Behind the Music,” in which he examines and deconstructs various pieces of music, reviews music libraries and holds a discussion on the various aspects of music theory, composition, and other related topics. He has also published a book, “The Principles of Classical Music.”

Gleckman founded Candlelight Pictures and Full Score Studios and has built a resume that rivals those of college graduates and professionals in his industries. Yet, amidst all of his accomplishments and accolades, Gleckman’s compassion for his fellow man and deep appreciation of history are prominent themes throughout his films and in his musical scores. His work is haunting and leaves his audiences deeply moved and spellbound. 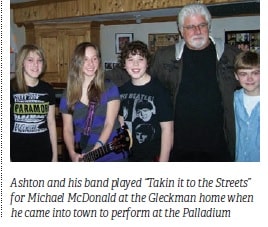 Gleckman’s work is a masterful blend of classical and modern compositions. His instructors and mentors have included JJay Berthume, Simen Christian Nelson, and Michael Schelle. In his career thus far, he has recorded two albums, written and directed a feature and short films, composed scores for multiple feature and short films and has complete a symphony. On May 14, Gleckman premiered his newest short film, “Eldritch,” for more than 30 cast, crew, family, and friends. As a director, Gleckman’s passion for film and for evoking emotions at all of the right moments throughout the film and musical composition, in addition to his young age and extraordinary talents, are differentiating him from his counterparts.

A family friend and mentor, Schelle is a former teacher of Gleckman’s. He has been the Composer in Residence for more than 30 years and founder/director of the JCA Composers Orchestra at Butler University. He is a three-time Pulitzer Prize nominee in music, a finalist for the International Humour in Poetry Competition (Paris), a published author (film music book) and restaurant critic. His music has been commissioned and/or performed by over 350 orchestras, symphonic bands and professional chamber ensembles across the U.S. and abroad.

“I’ve been in this business for over 40 years, and there are kids like Ashton around, but you don’t meet many of them for sure,” Schelle said. “I will guarantee that it is his passion, in addition to his extraordinary talents and gifts, that will create his success. His passion, his enthusiasm, and his curiosity is where he excels compared to others that I have met of his generation. Another thing about Gleckman that is quite remarkable is that he is self-taught. He is so intelligent, and it seems as though he absorbs things almost instantly.”

Though Schelle is no longer formerly training Gleckman, the two communicate on a regular basis and often dine and share ideas together. Schelle has moved into the role of a trusted mentor for the young virtuoso.
“He shares with me things that he discovers in the concert world,” Schelle said. “I’ve said to him all along that if he can embrace the music of the concert world and absorb that into his film music, Ashton will instantly be better than 50 percent of the people who are working in that industry in Hollywood. His music will be better.” 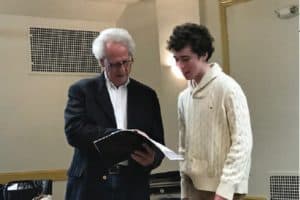 In late April, Gleckman traveled to Boston to attend a master class taught by the legendary conductor Benjamin Zander, music director of  the Boston Philharmonic Orchestra and Boston Philharmonic Youth Orchestra. Zander, much like Gleckman, was introduced to music at an early age. At age 9, Zander was composing, and by 12, he was studying under Benjamin Britten and Imogen Holst.

While visiting with Zander, Gleckman presented and discussed his recently completed first symphony. “It was an incredible opportunity to have Ashton introduce himself and present his entire full symphony to Mr. Zander,” said Jennifer. “He looked it over and told Ashton that he is interested in talking with him in August/September about potentially having Ashton come back in the spring of 2018 and quite possibly play his Symphony as part of the young composer’s program that the Boston Philharmonic offers.”

This past May, Gleckman attended three intensive workshops offered by NYU. He lived in the university’s dorm while attending workshops about scoring for television, advertising and film. He is spending the remaining weeks of his summer break in Santa Monica, California, enjoying a prestigious internship for Remote Control Productions. Remote Control Productions is a film score company run by the world-renowned Hans Zimmer.

German-born, Zimmer is recognized as one of Hollywood’s most innovative musical talents. Many movie-goers may recall the 2000 movie “Gladiator‚” for which he received an Oscar nomination‚ in addition to Golden Globe and Broadcast Film Critics Awards for his epic film score. Zimmer runs Remote Control Productions which has been responsible for a number of successful live-action films including the “Pirates of the Caribbean” movies, “Iron Man,” “Mission: Impossible II,” “Transformers,” “The Da Vinci Code,” “Inception,” “Sherlock Holmes” and its sequel, along with successful animated films such as the “Shrek” series, “Kung Fu Panda,” “Madagascar,” “The Lion King” and more.

Gleckman’s family is excited for his internship, even though it has taken him so many miles away from home. Gleckman is the middle child with two sisters. His parents are dedicated to supporting but not “managing” their son and emphasize the importance of teaching all of their children the virtue of humility amidst their successes.

“Our son has a voracious work ethic at age 16 that I have never seen in anyone before,” Ari said. “He’s an astonishing kid who has an incredible gift, but my goal has always been to instill a sense of gratitude, humility, and understanding of how truly lucky he is.”
“I’ve always approached this with the philosophy of ‘no regrets,’” Jennifer emphasized. “I believe that the true definition of happiness is striving for and achieving your full potential. With all of my kids, I’ve had a real conscious intention to try to remove any of the barriers that get in their way. It’s been an amazing journey so far, and at the end of the day, whether it’s driving him to New York City to meet a director to get that very first opportunity to score an entire 80-minute documentary on Auschwitz or driving to Boston to meet Benjamin Zander, we will support Ashton when these opportunities present themselves.”

Gleckman recalled his “aha” moment when he realized that film directing and composition were where his heart was leading him. “I was watching the film, ‘The Imitation Game,’ and was focusing in on the music by Alexandre Desplat, a French composer,” Gleckman recalled. “I was sitting there and was thinking logically about the ending scene, a very emotional scene. I was contemplating what in the world was making this scene so emotional. As I left the theater, I began thinking that it was the music, so I downloaded the soundtrack and listened to the last song. It became clear to me that music has this unbelievable relationship with film. Music is one thing, and film is another. And when you put them together, it’s a completely different experience.

“As film composers, it’s all about telling stories. The relationship that music has in helping to tell a story has unbelievable importance. For me, I have only a certain amount of years to, well, live. I got started a little bit earlier and hopefully, have a little more time to do all of the things that I want to do. I guess what it’s all about is creating something that you can leave behind, so I will continue to work every single day at progressing, improving and increasing my game. I will increase my output and my quality. I will continuously immerse myself in situations that are outside of my comfort zone within film and music and will try to open doors for new ideas and experiences.

“My goal is to be able to go to L.A. and work on larger motion picture films. I love directing, although it is a large and difficult goal to go after. But that appears to be the direction that I am going in at this time.”

For more information on Ashton Gleckman and to view his portfolio of films, compositions, and other works, visit ashtongleckman.com.