Michael Feinstein, the art director for The Center for the Performing Arts in Carmel, Indiana, was a friend to many of those legends, and he shared a few of his 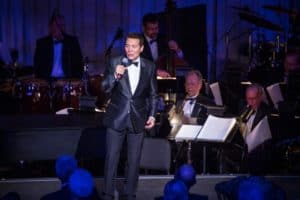 memories and his insights on cultivating the next generation of talented entertainers. Feinstein, a multi-platinum-selling, five-time Grammy Nominated recording artist, is an interpreter of, and an archivist for, the repertoire known as the Great American Songbook. The Great American Songbook is the canon of the most influential American songs from the early 20th century. The Songbook is comprised of standards by George Gershwin, Cole Porter, Irving Berlin, and many more.

At the Palladium, the magnificent 1,600-seat concert hall, is a gallery dedicated to the Great American Songbook Initiative, which preserves the original compositions, recordings, and other memorabilia that serve as artifacts of the Songbook for current and future generations to enjoy and study.
Feinstein and his fellow board members that represent the Great American Songbook Foundation also support the Songbook Academy®, a summer music intensive for young singers who have an interest in the Songbook. The Songbook Academy celebrates the Golden Age of American popular music. This program is the only high school intensive in the country that is dedicated to the music of Broadway, Hollywood musicals, and the Tin Pan Alley era of the 1920s to the 1960s.

“Everything is a continuum; everything that exists today is in place because of something that came before,” Feinstein said. “No one is more aware of that than I because of the work that I do with one foot in classic music and another in cultivating and discovering young talent. One of the things that is extraordinary is to see how music, by virtue of its DNA, is constantly reinventing itself and finds new creators and audiences that continue the evolution of music. The young people that I work with will take the Great American Songbook and make it their own. They will interpret the Songbook with their own individual voices and make it their own. That is why when someone passes, I feel that there’s always a legacy that is in place and will be around forever. 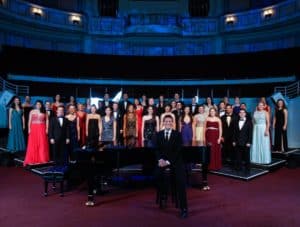 He adds, “Even if someone’s name eventually becomes obscure, what they have accomplished still remains a fundamental part of the continuum. Being a collector of sheet music, I literally have thousands of pieces of sheet music, and you can see thousands of pieces in the collection in Carmel that have pictures of people on the covers from 100 years ago, that are completely unknown, yet there they are. The only thing that remains is their picture on their music. But they are a part of the heritage, and I always get a pang in my heart when I see these pictures. I wonder who they were and where they came from. I also feel a connection with them because it was their music that brought us together. Their music affects people in the same way that it did back then.”

Feinstein continued, “Music always reflects the time in which it was created. It reflects the emotional and political pulse of the world. The world is in turmoil in many ways, not only politically with social causes, but also with technology. Abstract audiences and mass communication is very different than it was many years ago, and music is affected by all of that. The dissemination of music is very different than what it was. I think that it is harder for someone to become iconic in the way that artists like Prince, Elvis or Natalie Cole were.”

Feinstein explained that now it is much harder for a single person to gain mass attention in the arts though there are many extraordinarily gifted artists and voices. They are not necessarily heard in a mainstream way because that whole paradigm has shifted, just as sales of CDs and albums are no longer what they are because people download music. He strongly believes that talent will continue to assert itself and that the world will continue to see extraordinary talents become great musical souls, as they are born every day. He is not at all negative about the course and the future of music. Times of turmoil are when art becomes its finest, and he believes we are in a time where creativity will continue to blossom because of what is happening in our world. 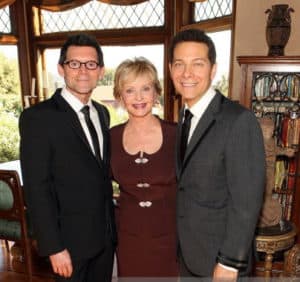 Feinstein reflected on a few of the icons that he knew as friends who passed this last year.

“Florence Henderson was the most wonderful person,” he recalled. “She truly had the energy of an earth mother; that is why she was so beloved by so many people. She not only played a mother on television, but she did have that energy of a nurturing soul and made people feel good, protected and safe. I was in the south of France with Florence on vacation with a small group of friends. We were in a rural village, and people were recognizing her. They came up to her, and it was wonderful to see the way that she embraced them. She was genuinely happy to have her picture taken with them and to sign autographs. To me, that was the most wonderful lesson. Here she was on vacation, wanting to relax, and she could not have been more kind and willing to make people happy. She was also a great artist. She started as a singer and was a very gifted soprano. I not only remember her as a great human being and a talented actress, but she was also a great musician.

Her death was certainly sudden. She was only sick for two days and the shock was immense. Florence was 82, but she seemed so much younger and certainly appeared younger.” Natalie Cole, the daughter of the late icon, Nat King Cole, also passed in 2017 and was a close friend to Feinstein. 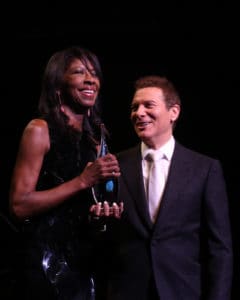 “Natalie Cole was also a friend and a person that I adored,” he said. “She was a very guarded person. She had a protective shield that I think she needed to carry because she was a fragile human being. Natalie was a tremendous talent with a perfect pitch. She was one of the greatest musicians that I’ve ever heard. A part of her was sort of wounded in a way that I never quite understood. However, she was a very good person, and if you asked her to do something for charity, she was always the first to be there to help. She treasured her father’s legacy very much. One night she was at my house for dinner and there was some music playing in the background, on a rotation. Randomly, one of her father’s albums began to play. We were right in the middle of dinner and she looked up, smiled, and said ‘Hi, Dad.’ It was so sweet. I was devastated when she passed. Natalie made her own mark with her work, and she was the true definition of a well- rounded musician. She is someone that I will miss forever.”

Debbie Reynolds and Carrie Fisher were also friends of Feinstein’s. He was better acquainted with Reynolds who offered him honest praise and criticism, no holds barred. “Debbie started out as a classical musician,” he said. “She played the bassoon in an orchestra before she became an actress. I was conducting the Pasadena Pops, and she came to one of my concerts. I asked her to critique me as a conductor, and she gave me amazing valuable feedback on my orchestral technique and on the movements with the baton. I really appreciated her candor and frankness and for not holding back on what she thought would make me better.”

Feinstein switched gears and elaborated on how important it is to recognize and cultivate the talented voices of today who may become the legends of tomorrow.
“It’s been a dream come true to see the growth of this organization, which was not possible without the affiliation with the City of Carmel,” Feinstein emphasized. “It never would’ve happened otherwise. It is the lifeblood of the community that gives us the support, in every sense of that word, to grow our mission. Our focus over the next couple of years, is to build a museum which, step-by-step, is becoming more of a reality. We are so excited to see how that is coming to fruition. The Great American Songbook museum will be a destination both physically and virtually for the city. It will change the complexion of the community even more in a positive way. Just as Cleveland has the Rock ‘N’ Roll Hall of Fame, and Nashville has the Country Music Hall of Fame, I think that it is going to be very significant for the city to have the Songbook museum located in Carmel. I say that from the response that I have received from people around the country and the world. They are so excited for the eventual creation and opening of the Great American Songbook museum.”

In January 2018, the 107-acre Asherwood estate, formerly the home of Mrs. Bren Simon and her late husband Mel Simon, was gifted to the Great American Songbook Foundation.  In November 2018, the contents of the estate were sold at auction to raise fuds for the Great American Songbook Foundation. https://carmelmonthlymagazine.com/asherwood-an-auction-for-the-ages/