Photography // Laura Arick and Courtesy of the Carmel Christkindlmarkt

In just a couple weeks, 10 Center Green will be transformed into a winter wonderland featuring the return of the Carmel Christkindlmarkt and Ice at Center Green. As previously announced and first reported by Carmel Monthly, the Carmel Christkindlmarkt has added its newest main attraction, the Glühwein Pyramid. The German-built, 33-foot tall structure stands between The Palladium and The Tarkington and is the only of its kind in the United States. The pyramid is adorned with 3,000 lights and Christmas-themed figures. 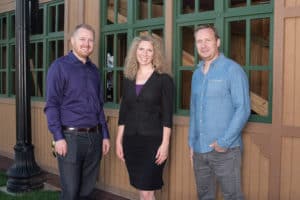 “Their arms were wide open for us to visit with them,” Maria said. “I showed them pictures of Carmel and of what the mayor has done with regards to The Palladium, and they said, ‘That is in the U.S. and in Indiana? Where is Indiana?’”

Paul met with Mayor Brainard and toured the city while learning about the Carmel Christkindlmarkt team’s dedication to making the market authentic. Paul decided to take the risk and join the market as a vendor. Steinbach brought over its beloved and world-renowned nutcracker dolls and other handcrafted wooden Christmas products. This led to the current partnership between the two entities that has forged a new chapter in the pages of their respective histories and has intertwined the two countries, Germany and the U.S., in a unique way.

“It’s a huge honor to have them [Steinbach] here,” Maria emphasized. “To have them invest such an incredible amount of time, energy and resources into bringing this pyramid is truly an honor and has never been done before in the U.S. to the best of our knowledge.”

Today, Paul is the owner of the Steinbach Company, which is still located in Erzgebirge, Germany. He and his team proudly maintain the long-standing tradition, attention to detail and passion for creating their world-famous nutcrackers and wood crafted masterpieces, such as Carmel’s Glühwein Pyramid.

Bringing the legacy of the Steinbach to the Christkindlmarkt proved to be a success at last year’s market. “The history of Steinbach and the affection that many Americans have for that brand name creates a lot of emotion,” Maria shared. “There is a lot of history in the U.S. with that name.”

When asked what Paul thought of the Carmel Christkindlmarkt compared to other Christkindlmarkts throughout the U.S. and Europe, he replied, “First of all, it is professionally managed. The huts are beautiful, and you can see the details and pride that Mayor Brainard, Maria and Brian have in taking care that it looks like any of the traditional markets in Germany. I have seen other markets in the U.S., and they use tents and don’t have authentic vendors. Here [Carmel], they try to have vendors from Germany represented and products from Germany. With the ice rink in the middle and to come here at night and see all the lights, it is just beautiful. You can smell the bratwurst and the sweets, and now you can enjoy the different kinds of Glühwein as well.”

Paul was complimentary of the city as a whole and praised Mayor Brainard’s attention to detail.

“It feels and looks like one of the most beautiful cities in the U.S.,” Paul exclaimed. “It is very clean and very modern. It has nice buildings, and even the street lights, they look like European street lights. Of course, The Palladium and all the area around it is very beautiful. He [the mayor] has done a great job.” 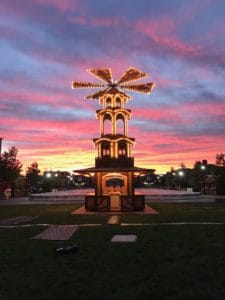 According to Paul and Maria, Carmel’s Glühwein Pyramid will have multiple taps, featuring 13 different kinds of Glühwein, including Glühbier brewed by Liefmans Brewery out of Belgium.

“As far as we know, this [Carmel Christkindlmarkt] is the only place in the U.S. where you can buy that [Glühbier],” Paul said. “It is a Belgium, hot cherry flavored beer that you drink warm. In Germany, people love it, and Liefmans only brews it for the German Christkindlemarkts. It is very hard to get this Glühbier, and they sell out of it each year.”

Brian added, “We think with the microbrew culture that has popped up in this area, we are optimistic people will be excited about exploring and trying something new.”

We asked Brian about the structural integrity of the 33-foot tall, 10-ton structure and whether it would be on display year-round.

Brian concluded, “I think that the pyramid being here this year represents to us the promise of what this [Christkindlmarkt] can become. We [Maria and I] have dedicated ourselves as an organization to partnering with German craftsmen and entrepreneurs as much as we can, and for a company like Steinbach to see what we have here in the infancy stages and want to partner with us in growing it, it is certainly encouraging to us.”