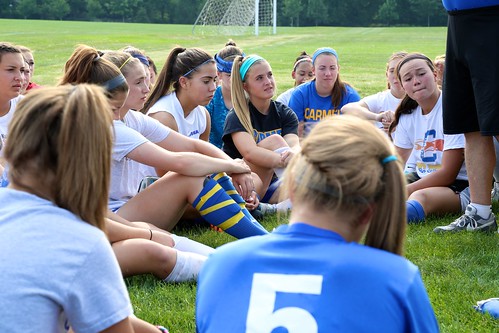 Not too long ago, this would have been considered just another high school girls’ soccer game on a fall day in Central Indiana.

Probably a few autumns ago, the stands would have been filled only with parents and friends. The competition may have been labeled as spirited but probably short of being called fierce. And perhaps players and coaches on both sides would have been guilty of thinking ahead to the upcoming Indiana high school state tournament.

But that was yesteryear and not this September 27 at Murray Stadium in Carmel. The 3,500-seat stadium should be bordering on a sellout and one of Indiana’s biggest girls’ soccer rivalries will be cracking with electricity. It is Carmel vs. Zionsville.

Indeed, keep the women and children off the streets because this re-match of northside powerhouses has become the heartland’s version of Liverpool versus Manchester United or Barcelona against Real Madrid. “Zionsville and Carmel in (girls’) soccer is a tremendous rivalry,” noted Carmel athletic director Jim Inskeep. “It is high caliber soccer and typically the first team to score is the winner.”

And that was the case in the sectional last year. Second-ranked Zionsville scored the first and only goal and advanced to the regional. No. 1 Carmel went home, broken-hearted. “It was like a brawl, a real fight,” recalled Zionsville coach Ramon Aguillon. 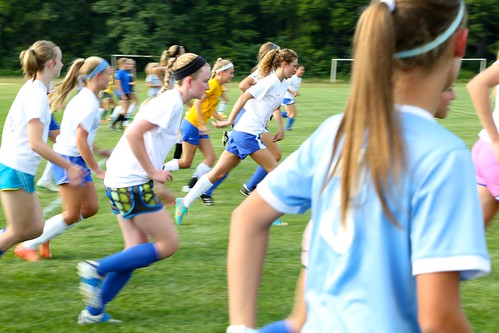 This year, both sides expect another gripping and punishing chapter to be scripted in September during the rowdy rematch. Yes, the cast of stars is slightly different, but the coaches, uniforms and nicknames are the same. “If you are a casual fan, it will be a fun game to watch,” assessed legendary Carmel coach Frank Dixon. “It will be very much like most of our games against each other since Ramon began coaching at Zionsville. It will be a tight contest with both teams playing very organized defense while trying to put away their chances on offense. There will be few surprises.”

Indeed, this rivalry was born when Aguillon took over the Zionsville reins in 2008. His first Eagles edition beat Carmel 2-1 in his coaching debut. Zionsville teams are a remarkable 5-3-2 under Aguillon against the vaunted Greyhounds.

“My first goal was to beat them,” said Aguillon. “I know our history and how we had never been able to get a win against Carmel. I really based our program on being able to not only compete but to beat them. I knew that if we could change that mentality of never being able win the (Carmel) game, success would follow.”

And it has…for both teams.

There is no arguing who is the Vince Lombardi of girls’ soccer in Indiana. It is the affable Dixon, whose Carmel teams have won nine of the 20 sanctioned state championships in his tenure. Dixon has twice been recognized twice as the National High School Soccer Coach of the Year. Inskeep credits Dixon with laying the groundwork for the youth soccer pipeline in Carmel.

“The number of children playing soccer at young ages is off the chart,” Inskeep stated. “There were over 2,500 playing soccer in Carmel’s Dads’ Club this spring. It is an amazing statistic.

“Frank has given much to the soccer community in Carmel in three decades. He was on the ground floor with the start of Carmel United Soccer Club and his dedication to students has now expanded his work with the Carmel FC. He can be seen at numerous events at our school, which speaks to his love of our school and program.” 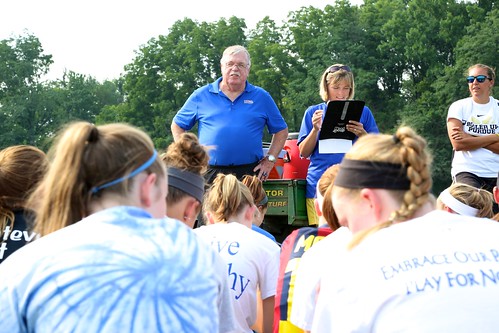 But Dixon is quick to hand over praise for his accomplishments to his players. In his 23 years at Carmel, the Greyhounds have produced nearly 50 NCAA Division I players. His 2011 state championship team featured 11 future Division 1 players (four seniors and seven juniors).

“As much as I would like to say that coaching is a big part, it is actually a small part,” Dixon said. “Coach (John) Wooden was asked why he was so successful. His reply was ‘I had the best players.’ Soccer is a player’s game and if you are going to win long-term, you must have good players.”

Aguillon understands that need. The native of Mexico faces perhaps his biggest rebuilding task at Zionsville this season. Twelve seniors—including six Division I players—graduated from last year’s squad. “Talent-wise that was the deepest and best overall team I have coached in my high school career,” Aguillon said. “In my opinion it was the best team in ZHS girls’ soccer history.

“We will be good this year if we can stay healthy. We have some great returning players who can help fill the voids.”

There are many who believe that Aguillon can dial in a very competitive team. Among those is Dixon. “The Zionsville coaching staff does a nice job of team building” the rival coach said. “It’s the old saying that the sum is greater than the parts. They put people in the right spots and stick with their system. Ramon and his coaches get the best out of their players.”

Zionsville athletic director Greg Schellhase agrees. “Ramon is a very passionate coach who has invested time and energy into elevating our program to one of the best soccer programs in the Midwest,” said Schellhase. “He has helped develop a very positive culture surrounding our program that is based on much more than simply winning soccer games.”

For the losing coach, Dixon, the pain of the 1-0 loss last October was numbing. “It was a well-played game and it was a shame that someone had to lose,” he remembered. It was apparent that the team that scored first would probably win. We had our chances but didn’t get it done. It always hurts when you realize that your season is done before you get to your ultimate goal.” 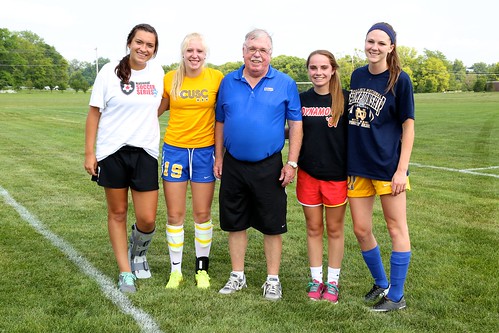 But despite absorbing that bitter loss, Dixon rose above the disappointment and delivered a memorable speech—to the conquerors. He spoke to Aguillon and his Eagles immediately after the game. “It was one of the classiest moves that I have ever seen,” said Aguillon. “He told us how he was impressed with the way we played.”

Ironically, Zionsville soon joined Carmel on the sidelines in the state tournament. Just a few days later, Avon took out the Eagles in the regional. “It was excruciating,” admitted Aguillon. “I have had some really hard losses in my career but that was the toughest one. I knew if we got past Avon, we had a real good shot at making it to state and to compete for a title. That is a game (Avon) that I don’t think I will ever be able to get past. It was that emotional for me and the rest of the team.”

Schellhase concedes the last two regional setbacks (2012 and 2013) were difficult but he also has confidence winning will continue on Mulberry Street. “The girls have worked very hard to use those games as motivation,” he said.

Inskeep also believes the same is true in Carmel where winning state championships in any sport can become a heavy expectation that borders on being a burden.

“I don’t think the expectations are out of line with the other expectations in our community,” the veteran athletic director said. “It is a progressive community that values excellence and competition. I have lived here for 40 years and it has always been this way. Whether it is the performing arts, athletics or academic competitions, our students want to reach the ultimate in their endeavors.”

Will it be No. 1 vs. No. 2 again? Will it be a contest pitting two potential state champions? Those answers are still being written. But at 7 p.m. Saturday, September 27 at Murray Stadium in Carmel, it will be two mighty Indiana high school girls’ soccer teams. Carmel vs. Zionsville. Brace yourself for a thrilling sequel. 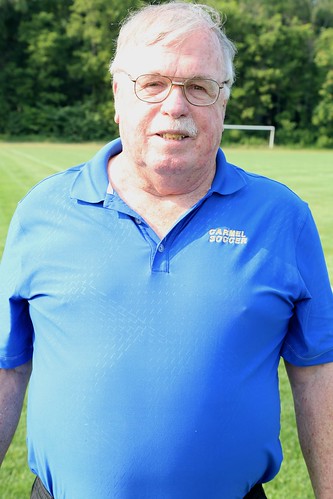 Of your nine state championship teams at Carmel, does any team stand out more than the others?

“For a high school coach, there is nothing better than winning a state title. All my state champion teams are special to me. Of course, I believe my non-state championship teams are also special.

Do you have any one player who stands out in your 23 years at Carmel?

“That is an impossible question to answer. I coached two Academic All-Americans, several All-America athletes and several players who were named Miss Soccer in Indiana.”

How many hours of the World Cup did you watch?

“Now that I am retired and out of season, I watched a lot of games. I have also taped every game.”

How do you mix high school soccer and club soccer?

“Like most other sports, soccer is a year-round activity. For the most part, high school and club soccer co-exist with both sides benefitting from the relationship.”

Is coaching still fun or is there pressure in having such a strong winning tradition as Carmel does?

“Actually, the pressure is always on the girls. As a coach, I want my players prepared for everything. The wins make up for the nervous times before and during the games.”

How do you handle losing?

“I love what I do but I also hate to lose…which results in sleepless nights before big games.”

What will it take for your team to win the 10th state title this season?

“We have players who need to step into key positions (goalkeeper and center midfield) to perform at a championship level. Scoring a lot of goals wouldn’t hurt, either.”

What one rule would you change in high school soccer?

“They have recently added a rule that the home team must wear all white jerseys. I would like to see our players at home in gold like we have done in the past.”

Did you play soccer?

“That depends on how you define the word “play.” I was on the club team at Purdue but most of my playing time came in practice.”

What secrets do you employ to keep your players hungry to succeed?

“Actually, there isn’t any big secret. My players are mostly very competitive young ladies who want to win. If I just keep the train on the tracks, we will more times than not arrive at our destination.”