A Carmel Legacy Looks to the Future with Confidence

Bayley, 81, has enjoyed a long and successful career with David A. Noyes, a local wealth management and investment-banking firm. He has been the Chairman of the Board since 1978 and began his career with the firm right out of college. He was hired on in 1958 after graduating from the University of Illinois and Northwestern University and has made a lifetime career with the firm.
“It has been the only job that I have ever held and I plan to keep working,” Bayley said. “My kids have told me that I can’t ever lose my job because I don’t have a resume. Hence, I am very determined to keep my job.”

Bayley and his wife, Dianne, raised their twin daughters, Kim and Chris (now deceased) and their son, Michael, in the community. Bayley developed the Winterwood neighborhood in which he and wife have resided for more than three decades. Bayley’s firm was the investment bank for the Shorewood Corporation, which developed the Morse and Geist Reservoirs in the 1970s. He purchased the first lot in the Morse development where he and his wife enjoyed entertaining family and friends.

Mark Damer, president and CEO of David A. Noyes, has worked with L.H. going on 10 years and shared some of his observations and stories on L.H. “L.H. considers his business his family,” Damer said. “Many other broker-dealer firms are shrinking all over the nation, so ours is a unique story of survival and long-term success because of the competitive nature and change that is going on in our industry. We have survived that largely in part due to the leadership of L.H. Bayley.”

Damer shared a personal story about Bayley that best exhibited Bayley’s love and appreciation for horse-power and a bit of his vivacious passion for life. “I remember going up to Morse Reservoir back in high school, the late 1970s, and the lake wasn’t very developed back then. It is a man-made reservoir so the developers were still in the processing of clearing out the debris that was underwater. There were a lot of idol zones. One Saturday afternoon, my friends and I were hanging out in one of the coves when suddenly, we hear this loud, high-speed engine sound coming from a cigarette boat. This is the kind of high-performance racing boat that one sees out in the ocean, going speeds of 80-90 mph. Here comes this cigarette boat, driven by none other than L.H. Bayley. It has been said by his own family, ‘L.H. does like his horsepower.’”

Bayley’s affinity for boats and cars has been exhibited over the years through his automobile collection that included classics such as his beloved 1958 Cadillac Eldorado Biarritz Convertible. Bayley has exhibited this car at Artomobilia, a fantastic exhibition that takes place annually in the Arts & Design Center of Carmel.

Bayley, along with the show’s other two co-founders, John Leonard and John Pitz, were behind the addition of Fueliscious, a fundraising event that is held at the Lucas Estate the evening before Artomobilia. Bayley, an honorary board member of the Indiana Children’s Wish Fund, collaborated with the Leonard and Pitz to create a first-class event that was focused on more than just the extravagant vehicles but on seriously ill Hoosier children’s wishes. “Fuelicious is about so much more than the cars and the enthusiasts,” Bayley emphasized. “It is about the kids, and who doesn’t have an affinity for helping Hoosier children, who are seriously ill, and their families?”

Bayley’s list of awards and recognitions is long. A few of his most notable awards include, but not limited to: Stockbroker of the Year, 1985; 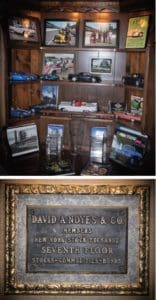 Advisor Hall of Fame, 1993; Outstanding Advisor of the Year, 1995; St. Elizabeth Ann Seton Award, 2002; Association of Fundraising Professionals; Indiana Chapter Awards Lifetime Achievement Award, 2009; and Sagamore of the Wabash Award, 1994. The NYSE honored David A. Noyes in 2003 and 2008, when Bayley was invited to the “ringing of the bell” to commemorate the firm’s 95 years as a member and for the 100th anniversary and Bayley’s 50th anniversary with David A. Noyes.

“It has been wonderful to live here in greater Indianapolis area,” Bayley said. “I started my philanthropic work with St. Vincent’s Hospital in the early 1990s. It was a call from God, and I served on that board for 12-13 years and as chairman for three of those years. I feel that it is important for our firm and our associates to be involved in our community. All of our associates are involved in their own organizations and causes and the firm’s leadership supports those. However, if we can support them, we do. Being involved in our community enhances our lives. I found that in my volunteer life and my business life, which I enjoy very much, I am never done. There is always more work to do. You can be burned out, and I have avoided that burnout by my involvement with my philanthropic work.”

Bayley reflected on his career, the development of the firm’s associates, and the succession plan with the addition of the Cooke brothers.
“I’m very pleased to speak about the management of the firm,” he stated. “There have been many economic downfalls throughout the firm’s history, and it is due to the firm’s management style and being about the client relationship that has allowed us to be one of the oldest midsized investment firms still in operation.

He enjoys the work because he gets to meet “the most interesting people in the world,” he said. “They are all creative and different. There are all kinds of challenges and issues that I get to help them with and goals that they want to accomplish for themselves and for their families. I know that we will make a positive impact in our clients’ lives, and those are the two passions that I will experience in some way, and that makes me excited about every single day. I am not only investing in people’s portfolios but in their lives and their futures.”

Bayley advised that the sooner young people begin investing in both liquid and hard assets, the better they will be. He recommended interviewing an advisor and finding one that can relate to what your goals are and that you enjoy working with. He emphasized that communication is essential to a successful advisor-client relationship.
With the addition of the Cooke Financial Group, Bayley feels confident that the future of David A. Noyes, now 109 years old, is in good, competent hands.

“These types of acquisitions put David A. Noyes in a good place,” Bayley said. “We are nimble, and we can make changes rapidly. We have 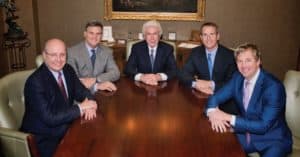 the best talent within our firm with the acquisitions of the Cooke and Wolfrum groups and with Mark Damer’s leadership. He was meant to do this. I look for that quality in every member of our management team. Are they really meant for this? If they make a move here, how does that work for the firm’s family?

“Chris and Brian Cooke bring their father, John Cooke’s, education and discipline. John Cooke was a great visionary. He built a terrific advisory-based business. David A. Noyes permits them greater growth in that we have several alternative investments. We’re not just about stocks and bonds but also hard assets-brick, mortar, dirt. We reduce the volatility of the portfolio that way. I am excited for the opportunity to grow further together in that area.”

“LH Bayley, and his lovely wife, Dianne, has been a personal and professional inspiration to our team at Artomobilia and Fuelicious since our first meeting in 2011 when he entered his Cadillac Eldorado… and went on to win that year. Since that time, his participation, commitment and guidance for our events is largely unmatched, and his personal friendship is a true blessing. He has an enviable charisma and passion for life that is absolutely infectious. And, I’m grateful to have LH as an advisor to our events, but moreover, consider him a friend and mentor.” John Leonard