A Holiday Tradition in Carmel

For more than two decades, Carmel High School’s Holiday Spectacular has ushered in the beginning of the holiday season, delighting its audiences with song and dance, fantastic sets and brilliant costumes. The show, a long-standing tradition for many local households, features hundreds of talented CHS performing arts students. Tickets are on sale now, and the excitement is already building around this year’s theme, “Holiday Wishes.”

Under the direction of Kathrine Kouns, director of choirs for CHS, 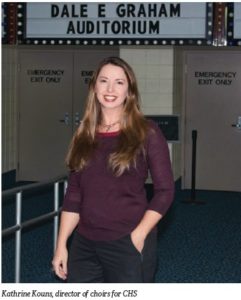 and her associate directors, Kyle Barker and Sam Chenoweth, the Holiday Spectacular is celebrating its 26th anniversary. Kouns and her husband, John, who assists her with the sound engineering for the show, moved to Carmel from Phoenix, Arizona, where Kouns taught for 17 years. She was already apprised of the Holiday Spectacular’s reputation prior to her arrival to Carmel.

“I was aware of the legacy and of the imprint that the program has had on the entire choral education community that was created by my predecessors, Ron Hellems, Ann Conrad and Lamonte Kuskye,” Kouns said. “The first time that I saw the Holiday Spectacular, I was blown away by the quality of the show and by the spectacle of it all – the costumes, the sets and lighting and everything that went along with it. When I was hired for the position, it was an absolute priority that the show continues at the level that it has been. Hopefully, the show will continue to improve and grow in magnitude. I view [the show] as a gift to this community and as an iconic kick-off to the season because we do it right after Thanksgiving. I think that there are a lot of people in the community that start off their season with attending the Holiday Spectacular.”

The Holiday Spectacular brings a professional level and high quality to its show every year. Kouns attributes the show’s astounding legacy of success not only the dedication of the students but also to the parents and volunteers who work tirelessly.

“The students, parents and volunteers are what make all of this possible,” she emphasized. “It is such an enormous undertaking to put on this kind of show at this magnitude with the number of students involved, and it is a big commitment for an already very busy time of year.”

Kouns explained she and her colleagues are preparing the students for life lessons in addition to having a passion for music. For their students who are likely to go into music professionally, it is important for them to have as close to a professional experience as possible. Kouns believes that it is important that all of her students learn the importance of doing their best and holding themselves to a higher standard in all things they do.

“It is important for them to have poise and understand the lessons of working together and taking care of each other on and off stage. These lessons will translate into any job or positions that they will hold in the future.”

Altogether, the Holiday Spectacular is produced by well over 500 students; 40 orchestra students, 30-40 tech students and 480 choir students. Thousands of costumes will be mended and altered by parents and volunteers.

Attendees can expect to see and hear their favorite numbers, from light-hearted numbers to heartfelt numbers that will reflect this year’s theme, “Holiday Wishes.”

“We always try to have a thematic focus,” Kouns said. “Last year’s show was ‘Let There be Peace on Earth.’ The whole theme was about the different holidays around the world and looking at them from a global perspective. The year before that, the theme was ‘Somewhere in my Memory,’ and the idea behind it was a collection of the wonderful holiday memories that we have. We created a collection of old pictures, some black and whites depicting people’s holidays. It was like you were looking through old albums or Christmas cards.”

Kouns said this year’s theme is based on things that we all wish for, especially around the holidays, like good health, time with family and for our troubles to be forgotten if only for a day.
“There are a lot of things going on in the world that are easy to be down about,” Kouns said. “Whether they’re manmade tragedies or natural disasters, the holidays can be a rough time of year for some people. Our whole show is focusing on the wishes that we all have and how we can not only wish for these things but hopefully make them come true.”

The directors like to change things up a bit as the years go by to keep the audiences enthralled. This year, they are working with current technology and equipment to change it up even more.
“We’re drastically changing the stage this year, as far as how the risers are set up and where the orchestra is placed,” Kouns said. “It’s going to look different when people walk in, and that will be something new and fresh this year. We’ll also be bringing in video screens on the sides of the auditorium that will have some accompanying slideshows and video at different times throughout the show that will hopefully enhance what is already happening on stage.”

“Some of the costumes are some of the same that have been used for many years, and there are a lot of things that people are seeing on stage that are well-loved and re-used. They probably don’t even realize it because we have, hopefully, given it a fresh new look. It is important to recognize the level of excellence that the directors had before me, and it has been fun to carry on that legacy.”

“For me, it’s the mass number at the end when you’ve got all of these beautiful kids bringing some hope to the audience members,” Reese shared. “To get all of these kids to work together and do something positive is always a beautiful thing.”

Reese shared that the Carmel Choirs are partnering with the CHS PTO Backpack program during the five-show run. They are conducting a food drive to benefit Carmel Clay students right here in our own community. There will be bins outside of the auditorium during the shows for dry and canned good donations. The directors and organizers of this drive are asking that attendees bring a donation along with them to assist with these efrts during a time of giving and thoughtfulness.