Warming Up for Another Year

The Carmel High School Athletics department and student athletes celebrated a record-setting year in many of its sports programs throughout the last school year. With a new school year ready to kick off, we look to 2017-18 and asked Jim Inskeep, CHS athletic director, what his expectations are for the upcoming year. We also discussed the addition of the district’s newest varsity sport, boys’ and girls’ lacrosse.

“We had a tremendous last school year with seven IHSAA championships and two state runners-up,” said Inskeep. “That is the challenge when you are a Carmel Greyhound: How do you meet the expectations and continue to raise the bar? The kids are already working really hard and have been over the summer break, preparing for their upcoming seasons. It’s tough for a student athlete because they know that they’re not putting on a uniform anytime soon, but the hours that they put in practicing and refining their skills have a tremendous amount of carryover on how they perform later on in the season.”

Inskeep emphasized that last year’s athletes exceeded expectations in several sports, and some teams performed at a level that they had never performed at previously. The girls’ swimming team extended their national title streak to 31, and the boys’ swimming team had one of the most dominant performances in the State finals in IHSAA’s history. The CHS athletic successes didn’t stop there. The boys’ track team won their third title in a row for the first time at the State finals, and girls’ tennis capped off an undefeated season with another State championship.

“As we move into the new school year, one of the great things about working in high school athletics is that we’re always interested to see how well juniors evolve into seniors and how they become the leaders of their programs,” said Inskeep. “We had a lot of big-time peer leaders in these programs that elevated the underclassmen to get them to perform and to get them to embrace the traditions and successes that had come before them. That’s the next challenge for these rising seniors: How are they going to lead their programs? We are excited about the year’s senior class and eager to see how they respond.”

CHS sports, performing arts and academics have earned a reputation for their standards of excellence and have built legacies that span over decades. Knowing the history and the expectations of their respective programs may be rather daunting to a student athlete, but Inskeep and his staff keep it all in perspective and stress the importance of a strong work ethic into their developing athletes.

“The kids have to embrace the past of their programs, but they also have to understand that it doesn’t score them any more points or take time off of their race,” said Inskeep. “What the knowledge of the history gives them is the confidence that if they work hard, they know that they are going to be in a position to compete for championships. All that we ask of them is to put themselves in the position to have success.

“One thing that is unique about Carmel, in general, is that there is such a high level of success and achievement. People just expect it as a benchmark. If I’m a sophomore kid sitting in my Geometry class, sitting next to someone who’s in the national champion marching band or they’re involved in the TechHOUNDS or are an AP scholar, whatever the case is, you know that you are surrounded by kids that are working hard. I think that the modeling that the kids provide each other drives a lot of this success in a lot of different areas.”

The announcement of the addition of the boys’ and girls’ lacrosse teams marks the first new varsity sport at CHS since 1983 when soccer was added as a lettering sport. 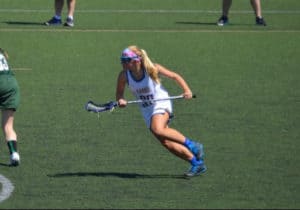 “It’s very exciting,” Inskeep exclaimed. “Lacrosse has continued to gain a lot of momentum over the last decade in Carmel. Much like soccer 30 years ago, there are not a lot of people that grew up playing soccer. Today, you’d be hard pressed to find a family in Carmel that didn’t have at least one child play for at least one season of soccer. We are now getting families that have a second or third child performing in lacrosse, and we’re starting to see sustainability with the sport which was what we were looking for when we were deliberating on adding it as a varsity sport.”

Inskeep mentioned that they are not starting from scratch in terms of adding it as a recognized sport. The two lacrosse programs have had quite a bit of success in the last decade but were lacking the administrative support and recognition that goes with being a varsity sport. He said that he believes it will be a good relationship between the sport and the school and will continue to elevate the sport over the years.

“If you are involved with the program now, the changes are that the sport is now being administered out of the athletic office and through the school district,” Inskeep explained. “There will be some minor changes with scheduling without taking away the competitive balance that the teams need to be successful. The lacrosse athletes who have walked the halls wanting to be embraced as varsity athletes will have that going into this year. I am very happy that we’re at that point now and that we’ll go into the spring of 2018 with another sports offering for our boys and girls.”

The boys’ and girls’ lacrosse teams will be competing with teams from area high schools, such as Noblesville, Fishers, HSE, Zionsville and Cathedral, to name a few.

CCS Superintendent Dr. Nicholas D. Wahl shared his excitement about the addition of the lacrosse teams. “Let’s talk about it from a participation standpoint. It is Title IX compliant because it provides equal access and opportunity for both young female and male student athletes at CHS. The feeder program through the Carmel Dads’ Club is strong and sustainable.”

The children who are participating in the club’s lacrosse programs now will be able to participate in the Carmel athletic program when they reach the high school level.

“It’s exciting for the kids most importantly, but it is exciting for the community as parents look at their younger age students matriculating up through the Carmel Dad’s Club lacrosse program with the vision of being a CHS lacrosse player on the boys’ and girls’ teams, respectively,” said Dr. Wahl. “It is tremendously exciting.”