This month we spotlight a new vendor to the Carmel Farmers Market, Bison World, which as you might expect, sells bison meat. A herd of around 50 bison are totally grass-fed while they roam on the Johnson family farm located just northeast of Noblesville. Owner Sam Johnson explained that their raising bison began with just a few as a hobby of his father, who even as a young boy had an affinity for bison. As the size of the herd expanded but the amount of available grazing land did not, Sam saw the need to start controlling the number of bison by processing and then selling bison meat. 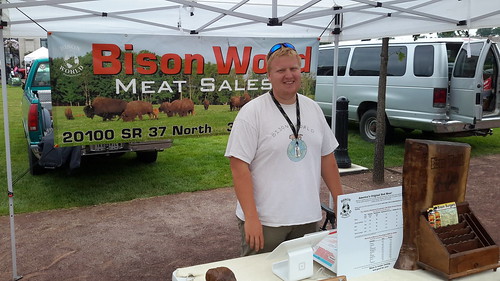 As Sam explained, these majestic creatures have remarkable physical abilities. Even weighing thousands of pounds they can outrun, out-swim and out-jump humans. As we approached the herd slowly, Sam warned not to get too close because they are still wild animals that at any time might decide to run you over.

According to Sam, as the old adage goes with respect to some superstar athletes, you can’t control bison, you merely try to contain them. On the Johnson farm the fences are made from discarded oil well pipes and not the wooden fences or strands of barbed wire, like you see on cattle farms. Sam admires and cares for the herd at a distance, except for a particular member of the herd that he raised from birth on a bottle. Even though this one has known Sam all of his life and will let Sam pet him, Sam still maintains a cautious attitude at all times with him. 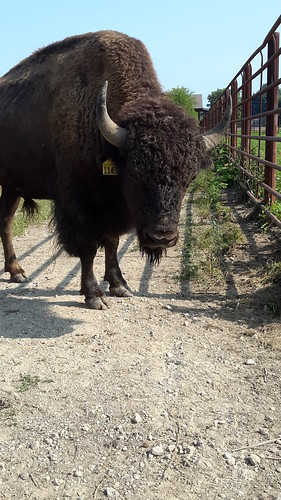 With the move by Americans to improve their diet and to try to eat healthier, bison meat has gained in popularity in recent years. First, nearly all bison are totally grass-fed, in part because it would be next to impossible to feed them in confined areas as can be done with cattle. Second, bison meat is naturally much leaner than beef and pork and is an incredible source of iron.

Research by Dr. M. Marchello at North Dakota State University has shown that the meat from bison is a highly nutrient-dense food because of the proportion of protein, fat, minerals and fatty acids to its caloric value. Reader’s Digest has even listed bison as one of the five foods women should eat because of the high iron content. According to Sam, bison meat has a three-time better fat-to-protein level than beef and is in fact leaner than skinned chicken meat.

For some time, Sam sold his bison meat to local restaurants directly. With the success he is enjoying at the Carmel Farmers Market, Sam has decided to sell his products only through the farmers market.