On May 1, Carmel Clay Schools Energy Manager and Printing Coordinator Bob Yull retired after 20 years in the position. His name may not be familiar to all, but his energy savings and conservation efforts have touched everyone within the Carmel Clay Schools.

Under Yull’s leadership, the district’s green initiatives have saved money and improved its environmental impact. Those actions have earned the school district numerous awards and accolades.

In the two decades that Yull served as Energy Manager, Carmel Clay Schools avoided over $17 million in energy usage expenses and decreased energy usage by 72 percent. During that same period, greenhouse gas emissions lowered by 50 percent, and water consumption shrunk by 55 percent.

Associate Superintendent for Business Affairs Roger McMichael says the district will save $1.2 million in energy costs in this school year alone.

McMichael refers to Yull as an unsung hero. “Bob has been directly responsible for the success of the program,” McMichael asserts.

Yull stepped into the role of Energy Manager in 1995. Former Carmel Clay Superintendent Stephen Tegarden hired Yull to help the school district save energy and cut expenses without impacting student learning. Tegarden initiated a partnership with Cenergistic, formerly known as Energy Education, to develop an energy-saving plan for the district.

Cenergistic promised its proposals would save the school district enough money to pay for Cenergistic’s fees and Yull’s salary. Both were accomplished. In fact, Yull contends that the district saved money in every single month since the start of the program.

Yull spent four years being trained by Cenergistic on ways to save money and reduce energy waste while improving the environment for students. Yull recalls meeting Cenergistic representatives at the schools a few times each week at “ungodly hours” of the day because they didn’t want to meet when students were present.

Yull also worked with teachers and staff to encourage turning off lights when students left the room. Staff was also advised to turn off computers before exiting the buildings for the night. 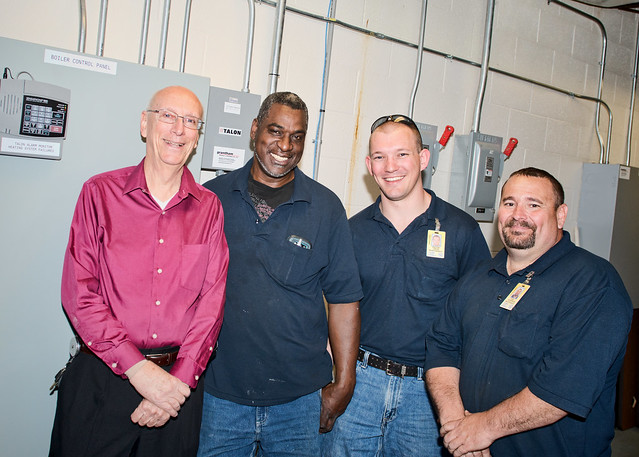 “The amount of electricity saved on one computer is not much, but when you add the thousands of computers together, it adds up to a lot of unneeded use,” Yull asserts.
“It’s the same thing with the lights.”

Yull says his Energy Manager position slid into the role of Green Manager too. Under Yull’s leadership, the school district has implemented other green initiatives. All schools participate in the recycling program.

It’s a single stream system that does not require recyclables to be separated and is less expensive than trash. Student groups have become involved in the recycling too. Custodial cleaning supplies have been replaced with green products.
The school district created a community garden located behind Carmel Middle School. The organic garden is cut into 100 4 x 15 plots that can be purchased for $10 by those within the community. Currently there is a waiting list to purchase a plot.

Carmel Clay Schools has a Green Team composed of Carmel Clay parents who volunteer to help with the district’s green initiatives and oversee the garden. Most Carmel schools have green clubs.

“Everyone in Carmel has been enthusiastic and supportive,” says Yull. “Without their support of the programs, we would not be successful.”

Yull’s efforts have earned the district many prestigious awards. In 2014, Carmel High School was one of 48 schools across the nation to be honored by the U.S. Department of Education with the Green Ribbon Schools award. Yull said the Secretary of Education only mentioned three schools in the speech, and Carmel High School was specifically recognized for the district’s green efforts.
“We were surprised and proud of that,” Yull says. “The award meant a lot. It tells us we are on the right track and doing the right thing for our students and the environment. It’s an acknowledgement of that.”

In 2013, the district earned Cenergistic’s Energy Lighthouse Award. The school district has also received Green awards from the Carmel Chamber of Commerce in 2010.

Kim Barrett, Principal at Smoky Row Elementary School, says, “Every recognition that our school system has been awarded for energy efficiency has been due to Bob’s all-encompassing visionary objectives.”

Barrett considers Yull’s energy management and conservation without equal. “It has been a privilege to learn from him and assist him in his efforts.”

Yull has spent the last 43 years in the Carmel Clay Schools. He served as the industrial technology teacher at Carmel High School for 35 of those years. In 1995, Yull took on the additional position of Energy Manager for the school district.

Yull says he hates to leave, but it’s time.

“I’m proud of our efforts; they are not mine but ours,” Yull says. “Everyone in Carmel has been enthusiastic, supportive and great to work with. I don’t put it on myself. It is the students and staff that have helped with the programs and helped with the environment. Without their support, the program would not be successful. They make it work.”

McMichael adds, “The old saying is that everyone is replaceable. I have worked in public education for over 40 years, and Bob is truly an exception to the rule. I don’t believe we can ever replace Bob.”

Yull says the school district will continue to do good works in the future, but those within the Carmel Clay School district say Yull’s actions will leave a lasting legacy.