It’s Beginning to Look A Lot Like a Christkindlmarkt

There has been a lot of buzz about the newest attractions that are coming to the Center Green this November. In addition to a new outdoor skating rink located between the Palladium and the Booth Tarkington Civic Theatre, the Carmel Christkindlmarkt will make its debut.

We spoke with several individuals affiliated with the Christkindlmarkt to get a sneak peek of what visitors can expect on opening day and throughout the holiday season.

First, let’s review the origin of a Christkindlmarkt. The Christmas market tradition stretches back to Saxony, Germany, during the Middle Ages. Over the centuries, the joys of the traditional Christmas markets spread from town to town and around the world.

Christkindlmarkt is the German name for the traditional Christmas market. These markets feature a delightful blend of holiday food, drinks, gifts and decorations. Various regions of Germany became well-known for their handcrafted Christmas decorations, woodworking, artwork or textiles. Today, millions of people enjoy Germany’s Christmas markets abroad and throughout the U.S. each year.

Here in the United States, Christkindlmarkts have been flourishing in cities such as Chicago and Naperville, Illinois; Denver, Colorado; and Philadelphia, Pennsylvania. The Christkindlmarket Chicago (spelled differently) is one of the nation’s oldest markets, celebrating its 22nd year.

The Christkindlmarkt CEO and Market Master Maria Murphy explained what visitors and residents can expect on the opening day of the market and the ice skating rink.

“We have a total of 38 huts that will have product or food for people to purchase,” she said. “There will also be a hut for the ice skate rental 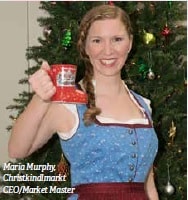 booth and one to store the Zamboni while the rink is in use. The huts will have red and white candy-stripe rooftops that are gorgeous. Opening day is Saturday, November 18. While we expect the crowds to start arriving around 12 noon, we will begin the opening ceremonies at 12:30 p.m. with an address from Mayor Brainard from the center of the ice rink. There will a performance by the Midwest Alphorn Retreat Group. They are an incredibly talented group who recently did a retreat in the Swiss Alps with the masters of the Alphorn. Then there will be a countdown to a ceremonial ribbon-cutting of all 38 huts, pretty much simultaneously, officially opening the Christkindlmarkt and the ice skating rink at 1 p.m. for the very first time in Carmel. The ribbons for the huts are being created by Julie Bejin with Bejin’s Bows to Go who was recommended by Mo Merhoff, president of OneZone.”

Murphy went on to explain that there will be a break in between the official programs, allowing patrons to shop, eat, drink or skate before the arrival of Santa Claus at 3 p.m. on the antique fire truck as tradition would have it, accompanied by Mayor Brainard.

Throughout the afternoon, the visits with Santa Claus and performances will continue. People will be able to enjoy all of the activities leading up to dusk when the mayor will address the crowds once more to commence the countdown to the lighting of the trees and cue the street department to systematically begin lighting up the rest of the city with its magnificent holiday splendor.

Murphy stressed her committee is working very closely with the leadership members of both the Palladium and the Booth Tarkington Civic Theatre to ensure the market’s performances will not impede or detract in any way from the performances that are scheduled at these venues throughout the season. 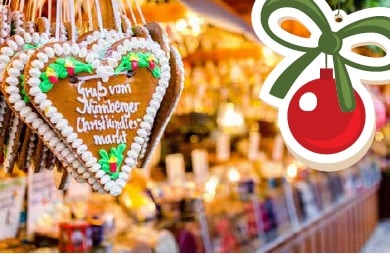 “My hope is that people will come to the Carmel Christkindlmarkt and experience an environment where they can connect with their family and friends and enjoy the holiday season outdoors,” Murphy emphasized. “I hope that they enjoy the feeling of being together for the holidays and the ambiance of warmth and closeness and the nostalgia of simpler times.”

Using the Christkindlmarkt as another way for their students to immerse themselves into German culture, Carmel Clay School’s German teachers, Laura King, Angelika Becker, Joy Gieschen and Nathan Lorey, are working with Murphy on ways to include their students while enhancing the experience for the visitors of the market.

“We were all excited when we first heard about the Christkindlmarkt,” King said. “Maria reached out to me and asked if we would like to get involved, and we all said yes. Our two middle school German teachers are working with Maria on a scavenger hunt involving the vendors. It is a way for participants to learn more about the importance of the German language and facts about German heritage. The scavenger hunt will also be a way for people to learn about our German language program at Carmel Clay Schools that begins in our middle schools.”

King said that the program’s level 4 and 5 students, who are proficient in speaking German, will be given the opportunity to volunteer at the Christkindlmarkt and will be identified by wearing a button that says they speak German. These accomplished students will be on-hand to assist and share their knowledge with the marketgoers.

Local businesses will also be playing an important part in this inaugural market and will be offering authentic German products made from German recipes and old-world techniques.

Joe Lazzara, owner of Joe’s Butcher Shop and Fish Market and Joe’s Next Door, spoke about what specialty items he will have at his hut.

“We’ve been in business for 12 years, and through those years, we’ve gained a reputation for our hormone and antibiotic-free meats and 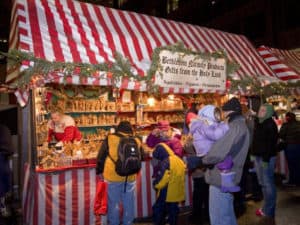 fresh made sausages. We are looking forward to showing our creative side with what we will be offering at the market,” he enthused.

“We will be offering traditional Nuremberg Bratwurst, Currywurst and Beef Wurst, both cooked and raw, so people can take them home and cook them. Through Joe’s Next Door and Chef Jon Radford, we’re duplicating exact recipes out of Nuremberg and Frankfort, Germany. They’re going to be delicious, and we’re also offering lunches and dinners during the hours that we are open at the Christkindlmarkt. We plan on plating these sausages in the traditional German-style with traditional, made-from-scratch sides.”

Lazzara met with Murphy and discussed his offerings and also his reservations about the market and the ice skating rink.

“After speaking with Maria and seeing how this is designed to be a community event with the idea to inspire the community as well as provide a great event in the winter season that had not existed here before, it outweighed my political view and my objections. After seeing the great effort that Maria and her team were giving to involve local businesses, I wanted to do my part in making this a real community experience by participating.”

At the time of publication, the City of Carmel was in negotiations with Mike Aulby, owner of the Carmel Ice Skadium. The contract would put Aulby in charge of the rink’s operations during the season.

“Working towards an agreement with the City of Carmel is good for them and for us,” Aulby said. “We hope to see the interest in ice skating be at peak level, not only during the market and rink season, but beyond that when the rink closes for the season, and the business could then carry over to our business as well.” 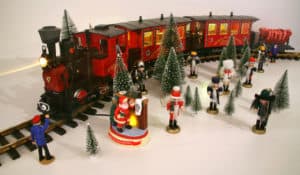 Another local area favorite, the Zionsville Train Depot will also be participating in this year’s market, according to Murphy. For those who remember Rick Whitt from the beloved Watts Trains and Toy Shop in Zionsville, Whitt will be on hand with a display of German-made model trains from his shop.

Whitt bought the inventory of trains and toys from the Watts family a few years ago, and after working with the Watts for over 10 years, he decided to buy their inventory and grow his own business that targets model train enthusiasts and novice hobbyists alike. German-made model trains such as LGB (Lehmann Gross Bahn) originated in Nuremberg, Germany, since 1968. LGB trains are responsible for introducing “G” scale to model railroading. It is just one of the German-made brands that are available at Whitt’s store in Zionsville and will likely be on display in his hut at the Carmel Christkindlmarkt.

Of the visiting vendors who are traveling to Carmel to be part of its inaugural Christkindlmarkt, the Baked Cheese Haus, a Wisconsin specialty and artisanal cheese company, is extremely excited to be one of the vendors. The Baked Cheese Haus has a dedicated following at the markets that it visits and hopes to generate that kind of energy here.

“We offer cheese like our unique Juusto ‘Baked Cheese,’ a Scandinavian-inspired delicacy,” said Joe Burns with Baked Cheese Haus. “We also offer Swiss-style Raclette at our booth. We melt half-wheels of Alpine cheese under traditional Raclette warmers and scrape the cheese onto toasted baguettes. It is a big Alpine comfort food if you will.”

Commemorative items will be available for sale at the Christkindlmarkt, such as authentic steins and Gluhwein mugs designed and created in Germany specifically for the city of Carmel. There is a long-standing tradition of people collecting the Gluhwein mugs, which can also be used for cider or hot cocoa. Murphy hopes people will begin their collections with the inaugural collectibles that will help to commemorate a very special time in Carmel.

For information on hours of operation, the official schedule of events, a vendor list and a preview of the Custom Carmel Collectibles, visit carmelchristkindlmarkt.com