An icy cold beer straight from the tap … yum! Waiting in a half-hour line at the Colts game to acquire said libation … yuck! Thanks to Josh Springer and his Bottoms Up creation, the line is reduced or eliminated, and the icy cold beer has a perfect head. 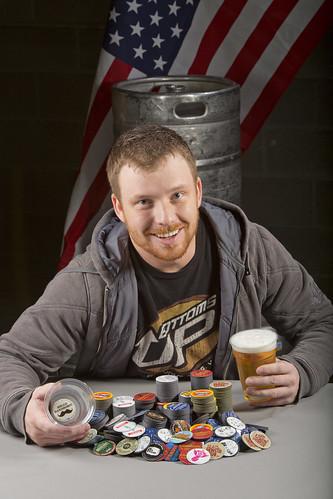 Let’s start from the beginning … 2008. At Josh Springer’s dad’s birthday party, Springer envisioned a beer being filled from the bottom of the glass and announced how cool such a device would be. Knowing his personality, Springer’s dad challenged him, saying: “If it could be done, somebody would have already done it.”

Four days later, Springer’s very first Bottoms Up prototype was created in his stand-alone garage in Washington state. After taking a week off work to create a refrigerator dispensing unit, he was able to try it out at a local festival where it was a huge success. Springer never went back to work, and GrinOn Industries was born. In 2011, the company moved to Indianapolis to be closer to their suppliers and more centrally located.

Let’s move on to the dispensing system. When the cup is pushed down onto the nozzle, it pushes the magnet up and allows beer to flow into the cup until it is full, at which time the system stops. When the operator is ready to grab the beer, she pulls the cup up off the nozzle, and the magnet floats back down to seal the hole before more than a thimbleful of beer spills out into the drain. How cool is that?

Even better for the user is the fact that Bottoms Up produces a perfect foam head, meaning less foam needing to be poured out. Even better is that multiple beers can be filled, hands free, allowing the operator to collect other order items and take the patron’s money while the beer is filling. More beer is sold, and hardly any beer is wasted. The customers benefit from shorter lines, the perfectly poured beer and a reward souvenir magnet for drinking all their ale. Even advertisers can benefit by placing their logo onto the magnets.

That’s exactly how I would describe Springer – genius. He never finished college – not because he couldn’t, but rather because he didn’t need to. He invented the product, created the business and even developed the assembly lines.

But that doesn’t mean he didn’t encounter obstacles.

“Doing something that’s never been done before and getting people to understand and wrap their minds around it [was a challenge],” Springer said. “For example, it was difficult to find a manufacturer for the dispenser or cups, so we decided to just do it ourselves.” 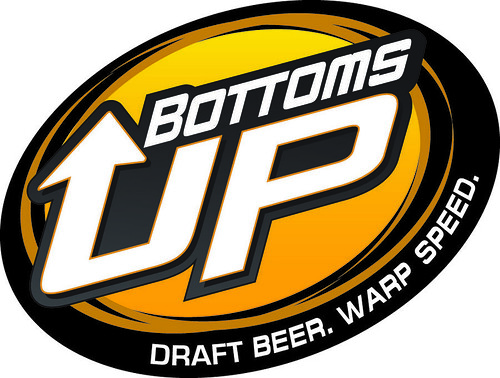 Growth is in the future for GrinOn Industries, according to Springer. They are also working on producing reusable glassware and pitchers for their systems and expanding their home units (yes, you can have a system in your basement!) and commercial sales. They are currently in a fundraising stage and looking for accredited investors.

I encourage you to check out their website at BottomsUpBeer.com, at the very least, for a visual of how the system works. Cheers!