Before moving too deep into written prose about music theorist Aaron Krerowicz and his study of the Beatles, let’s separate fact from potential fiction about the 30-year-old Carmel resident who has submerged his adult life into studying this legendary group from Liverpool. 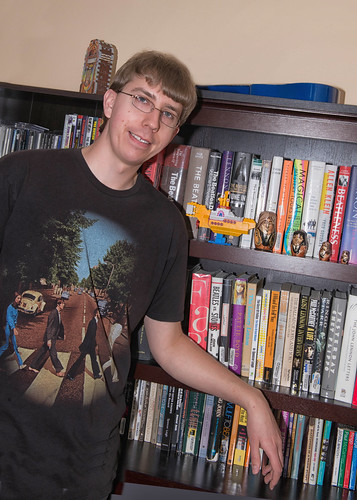 Fiction: Krerowicz does not wander around his modest home wearing John’s brilliantly colored yellow uniform featured on the cover of “Sgt. Pepper’s Lonely Hearts Club Band” album. Nor does he sport replicas of the bright and brilliant outfits that were adorned by George, Paul and Ringo for the front of the 1967 album.

Fact: The walls of his working den are filled with dramatic, framed black and white posters of the Beatles, and the bookshelf is bursting with a whopping 141 – or is it 142 – books about the lads from the other side of the ocean.

Fiction: The living room of Krerowicz and wife Natalie Todd contains the drum set of Starr that recently sold for a reported $1.5 million to a Carmel resident. That resident was Indianapolis Colts owner Jim Irsay and not Krerowicz who gives presentations about the Beatles for under $500.

Fact: The den hosts a guitar, ukulele and a set of keyboards that Krerowicz, who graduated in 2008 from Butler with a degree in Music in Theory and Competition, will occasionally play in study of the skills and practices of the Fab Four.

Fiction: The backyard on 98th Street has a horse named after George Harrison, labeled the Dark Horse in his days as a performer.

“That is Abbey with an e,” said Krerowicz.

Of course, this puppy would have an ‘e’ in its first name. The 11th album by the Beatles released in 1969 was Abbey Road and not Abby Road. (By the way, Abbey’s last name is not Road.)

To put it mildly, visiting with Krerowicz is a long and winding road (pun intended) about his study and theories on the world’s most famous foursome of musicians from 50 years ago.

“I call it a glorified hobby,” admitted the Wisconsin native.

Indeed, it may be classified as a hobby to some bystanders, but Krerowicz has also turned it into a lifestyle and a budding career. He has a computer filled with notes, musical clips and images that are presented at his speeches which blanketed 14 states in 2015. Not included in those 84 presentations was a summer tour to England in July in which he spoke twice in London and three times in Liverpool. You might say that he represented the American invasion of Great Britain.

Locally, Krerowicz will present “The Beatles: Band of the Sixties” Monday, February 1 at the Hussey-Mayfield Memorial Library in Zionsville. This will be his first engagement in Indiana since his move back to the Hoosier state from the east coast in August. The presentation is free, but registration is required on the library’s website, zionsvillelibrary.org, or by calling 317-873-3149. 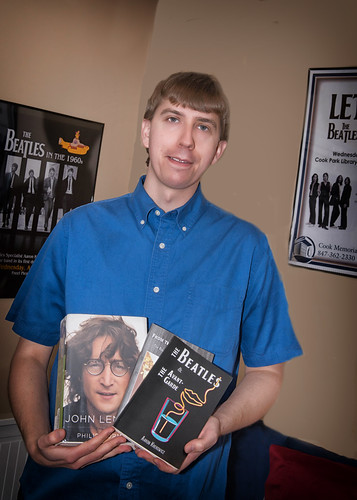 Future 2016 touring stops will include visits to Florida, Arizona, New York, Wisconsin and the rest of the Universe (another cheap referral to the Beatles).

“I would say the presentation is more of a historical look at the Beatles instead of a performance by me,” said Krerowicz. “It is an education and an appreciation of what they accomplished as musicians. We try to take a sophisticated look at their music and explain it in a way that you don’t need a music theory degree.”

And Krerowicz marvels at the musical talents of the Beatles, putting them in the echelon of other famous players like Mozart, Bach and Beethoven.

“They were certainly the foremost musicians of their time,” noted Krerowicz who gravitated to the era changers when his dad mixed tapes of the Beatles and played the music on the car radio. His personal attraction to the Beatles made a big turn in 2010 when he earned a grant to study the band on a full-time basis.

“It enabled me to have the time and money to really appreciate what they accomplished,” he said.

Krerowicz has turned his study and time into several avenues including publishing three books – “The Beatles and The Avant-Guard,” “The Beatles: The Band of the Sixties” and “From the Shadow of JFK: The Rise of Beatlemania.” The latter was printed this year and takes a look at the intersection of the assassination of Kennedy and the arrival of the Beatles on the American pop scene (on “The Ed Sullivan Show” in 1964).

“Both of those situations were samples of the impact on the youth culture of this country in the ’60s,” he stated.

Krerowicz, somewhat grudgingly, gives additional credit for the music movement in the ’60s to others such as Dylan, the Beach Boys and the Rolling Stones. But he puts the Beatles at the mountain top of those who impacted the era that broke away from the crooners (Frank Sinatra et al.) of mom and dad.

“The biggest surprise that I have found is how much artistry the Beatles had,” he said. “They were just really good.”

And every day has become “A Day in The Life” for this disciple of the Beatles.